Theater in the Raw

The maverick Bricolage Production Company showcases new labors of love and titans of American theater at the inaugural In the Raw festival. 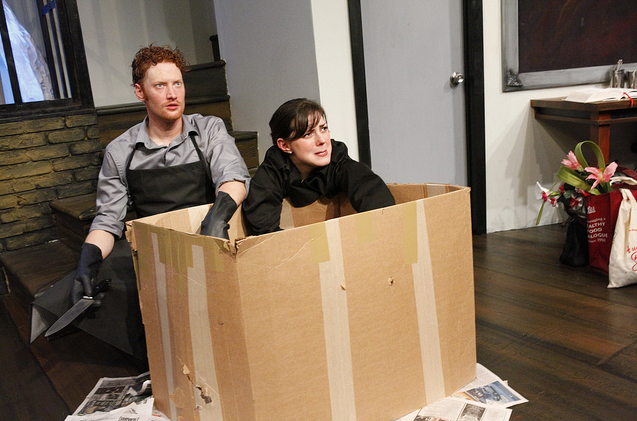 When I was fresh out of college, I briefly entertained ambitions of becoming a playwright. The fact that I had never written anything close to a full-length script seemed a temporary hurdle at most; I did some writing, I had a real-life theater degree. How hard could it be?

For one thing, hard. What’s more, uh, really hard. And beyond that, the competition is fierce. For every play that makes it to the smallest black-box theater, there are a dozen labor-of-love scripts that never see a rehearsal.

So when Bricolage Production Company — already known both locally and nationwide as innovators and creators thanks to projects like Midnight Radio and the wildly inventive interactive experience STRATA — put out a call for scripts, they got quite a few.

Almost 100, within a matter of weeks.

The Bricolage crew pared down the submissions to only three for the inaugural In the Raw Festival, a five-week series of staged readings. Each play gets a week with a director and a cast to workshop and revise; at the end, Bricolage opens its doors for two public readings.

“And the dialogue we have with our audience afterward is so incredible,” Dixon said. “They’re not just saying, ‘You should’ve written this.’ They’re asking amazing questions, and giving great comments.”

We’re a little over halfway through the proceedings now, with two weeks to go. In addition to the three new works, Bricolage is also throwing a little contrast into the festival by offering readings of classics — they already tore through A Streetcar Named Desire, and will offer A Raisin in the Sun this coming Monday. It’s a curious addition; they’re contrasting works that were just born with some of the all-time titans of American theater. Works like Streetcar and Raisin may be a departure for Bricolage … but, well, departure is really what the company is about.

“We don’t usually do classics, so it’s a brand-new thing for us. It was really freeing to rely on something that we already know is beloved by the theater community all over the world,” Dixon said. Furthermore, it’s not as though these works are exactly old-hat. “These are plays that have lived in the canon of American Theatre for sixty years. And they’re still relevant; with Raisin, we’re talking about race, class, equality and inclusion — all topics that are absolutely still relevant.” (So relevant, in fact, that the Public is staging Clybourne Park, a modern response to Raisin in the Sun, right now.)

The series will conclude with a new work called The Gospel Singer, by California native turned Pennsylvania transplant C.S. Wyatt. And speaking of cultural relevance, Wyatt’s play will hit home for a lot of people.

“It’s set in the 80s, in the height of the AIDS epidemic, and [follows] a black female impersonator — he would never call himself a drag queen — who sings Patsy Cline and “Fever”,” Dixon explained. “But he really just wants to sing gospel. But because of homophobia and the church ostracizing people who are different, that wasn’t allowed.”

A Raisin in the Sun is up this Monday for a one-night engagement; The Gospel Singer follows on May 19 and 20. For theater fans, the In the Raw series has a lot to offer — new voices, new takes on classics and a look at the Bricolage process in its, well, raw state.

For casual theatergoers, though, what is there to gain from a series of staged readings? To Dixon, plenty.

“You discover language. All you have are the words. One of our audience members said he liked readings more than full plays, because he gets to make the choices. You are responsible for adding your own imagination to the story.”