The Yanks Go Marching In

The beautiful game has captured America.

Sean Conboy,
“We embody what Americans are about. We can moan about it or we can get on with it.” — Team USA Captain Landon Donovan.

For the last 100 years, the United States of America, as a nation, did not understand the game of soccer. We did not understand its importance, its stakes, its redemptive power. But when goalie Tim Howard made a crucial stop in the 91st minute of yesterday’s deadlocked all-or-nothing game against Algeria and hurled the ball forward, shouting for his teammates to “attack! attack!” as the dying seconds ticked away, there was a collective desperation emanating from the unlikely fans watching on the other side of the TV screen.

We did not want to go home. We could not stand for the whiners, the divers, the crooked-and/or-willfully-blind referees to rob us of what was rightfully ours. Finally, we cared.

And as the boys in white rolled down the field as a collective wave, punching the ball forward with recklessness—with the announcers’ voices rising and the vuvuzelas blaring and the Algerians retreating on their heels—time suddenly seemed to stand still.

And then this magical happened: 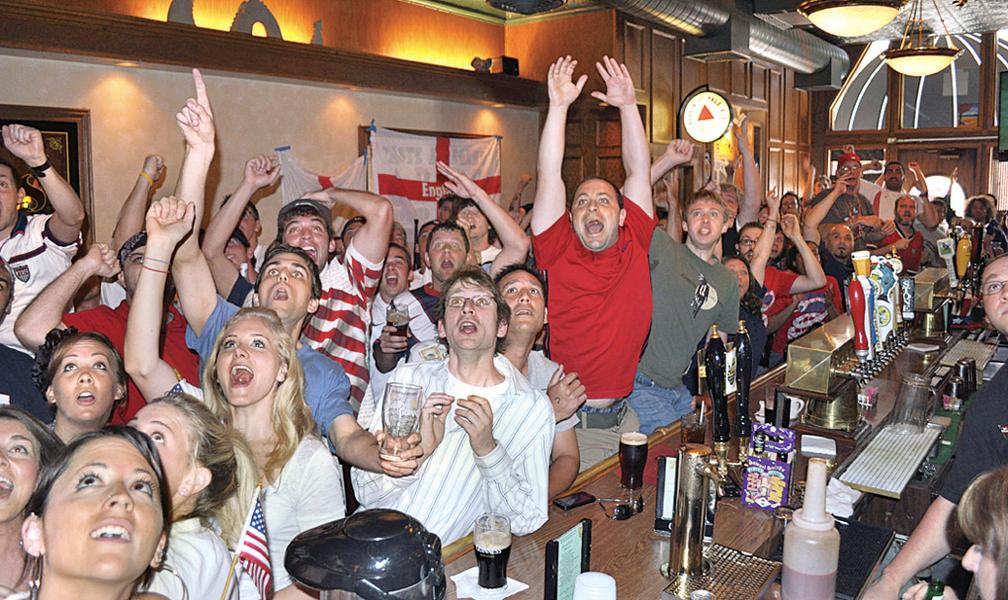 Click the play button for the greatest thing ever.

At Piper’s Pub in the South Side—yes, in Pittsburgh—the wall-to-wall crowd broke out into the chant of “When The Yanks Go Marching In.” The celebration spilled out onto Carson Street. One dude was wearing star-spangled boxers. If you were unfortunate enough to be in a cubicle secretly watching the game online, you probably had a muffled freak-out and had to explain to your boss that you were just nuts about her latest PowerPoint.

Let’s be honest, America. We are going through hard times. Oil has been spilling into the Gulf of Mexico for the past 65 days, the DOW is more volatile than your last relationship, you probably know at least five people who are currently out of a job, and the world still pretty much thinks we’re all Kid Rock. 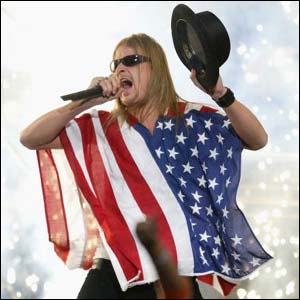 This is how a dude in Slovenia pictures you.

When the entire U.S. team, including assistant coaches and ballboys and what seemed to be random pitch-side stragglers, pig-piled onto Donovan, America got let in on the secret that the rest of the world has known for a century: Fútbol is more than a distraction, or an escape, or a political statement.

It is about redemption. No matter where you’re from, it is a way to forget about your country’s GDP, or your own overdraft fees, and all the little miseries at your doorstep. 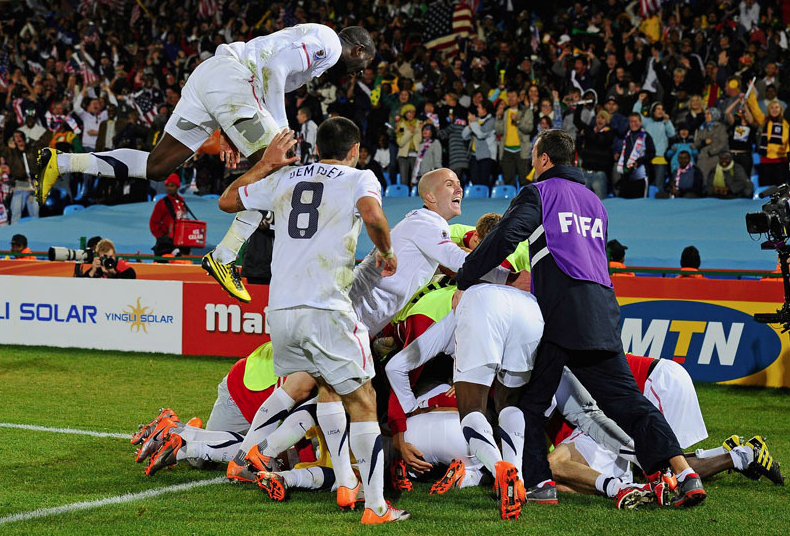 For 20 seconds, we were allowed to be proud of our country.

For the first time since the first World Cup in 1930, the U.S. emerged from its group in first place. But more importantly, as Donovan told ESPN after the game, they played the game the right way.

The U.S. didn’t resort to ludicrous flopping like the Ivory Coast. They didn’t assault the officials with insufferable whining like the gesticulating Italians. They didn’t outright quit and refuse to practice, as the French did. And they certainly didn’t physically assault a female reporter, as an Algerian player did. 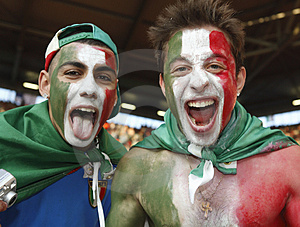 The Americans’ biggest show of character happened just moments before Donovan scored the winner, when forward Clint Dempsey took a blatant elbow to the mush right in front of the Algerian goal. The official, doing his best “confused WWF referee” shtick, somehow missed the foul, which left Dempsey gushing blood. Spitting claret, Dempsey didn’t make a big show of it. He got up and got on with it.

Had that foul been committed on an Portuguese player like the theatrical C-Ronaldo, they would have held a public funeral ceremony right on the field. 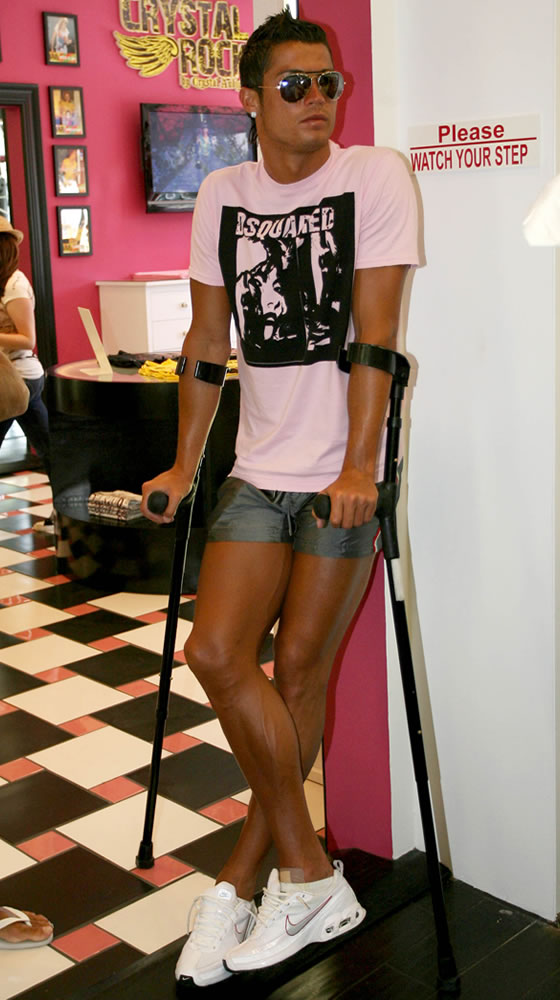 Ronaldo in recovery after stubbing his tootsie on a nightstand.

As ESPN announcer Martin Tyler said after the final whistle, "Hollywood couldn’t write a better script." He was referring not just to the dramatics of the game, but the improbable build up to the result. Donovan, the hero, had been criticized for years as a soft, immature golden boy. His recent split from his ex-wife, actress Bianca Kajlich, left him admittedly wounded. His tears at the end of the match tell the story.

Then there were the defectors, like American-born forward Giuseppe Rossi, who decided to play for the Italian national team instead of his home country. His parents are Italian, but he grew up in New Jersey. Unfortunately for Benedict Arnold Jr., he was cut from the Italian World Cup team, and watched the U.S.’s victory from home, like the rest of us. 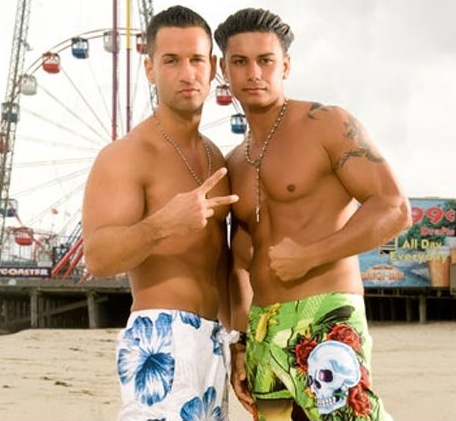 "Should have stayed in Jersey, bro."

The U.S. now move on to the 16-team knockout stage to face Ghana, the physical, aggressive team that defeated them 2-1 in the 2006 World Cup. The road won’t get any easier in the knockout stages. It’s win or go home. No more draws. But nevertheless, as Donovan said after his fairytale goal canceled the team’s return flight from South Africa, “We’re alive baby.”

So are the rest of us back home. 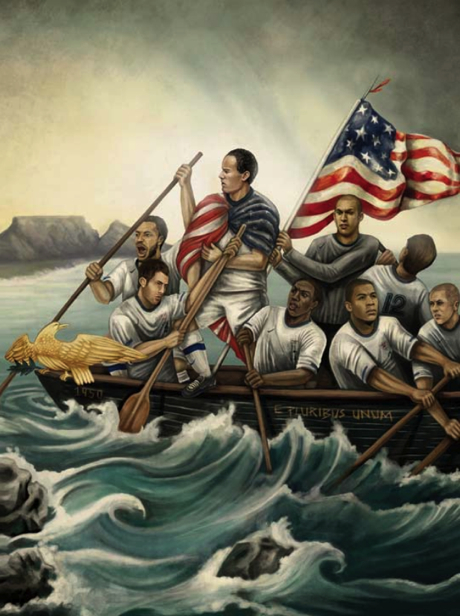