The (Very Good) Brewery You Should Be Patronizing in Homestead

Voodoo Brewery is an enticing alternative to the many chains in and around the Waterfront. 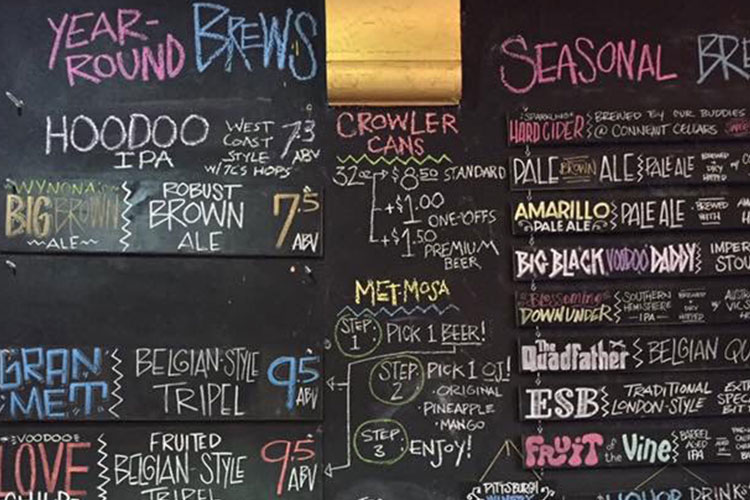 After a movie with a friend at AMC Loews in the Waterfront, I gazed out at West Bridge Street, trying to decide where we should stop and get a drink. The numerous chains nearby offered options ranging from overpriced drafts to overpriced alcoholic milkshakes (albeit delicious alcoholic milkshakes); other spots promised a bombardment of noise from dueling pianos or video game machines. Nothing appealed.

Then I realized we were just across the railroad tracks from Voodoo Brewery — we could stay close by but patronize a locally owned spot. Five minutes later (including one circle around the block to find street parking in the midst of one-way roads), we arrived.

I knew as soon as we ordered that it had been a good decision.

After gazing up at the ceiling-high chalkboard menu, I chose a Voodoo Love Child draft (a Belgian-style tripel, aged for three months on Michigan sour cherries, Oregon raspberries and passion fruit). My friend asked for something resembling a Blue Moon and was given a Gran Met draft (described as “a Belgian-style tripel with a flash of delicate flavors; beet sugar added during fermentation softens the alcohol flavor production”) with a splash of mango orange juice. I also asked for a water, having consumed an entire barrel of popcorn at the theater, and was directed to a dispenser to my left. The atmosphere in Voodoo, which is a former police and fire station, is pretty bare bones (you seat yourself and order at the bar) but fun, with local art decorating the colorful walls.

I was completely charmed by the way our bill was presented — inside of the front cover of a book. Other patrons had scribbled their names or a note inside.

I was further charmed by the beer itself. I had initially declined to start a tab but found myself back at the bar to try another offering after my experience with the first (and after learning the notably reasonable price for one glass: $5.50). My second beer, The Quadfather — a traditional Belgian quad with a hefty ABV — was much darker but just as good.

Given the hour (Voodoo's kitchen shuts down at 10 p.m. on Friday and Saturday), and the immense amount of popcorn I'd eaten, we didn't order food, but the options listed on the board sounded tasty enough to entice me back (Tuscan Chicken pizza and Italian meatball tapas? Yes, please).

The lights came on for last call shortly before midnight, with the bar still well-populated. The high alcohol content in our brews — we didn’t try anything under 9 percent ABV — made two enough for the night.

In short, it’s nice to have good options around the Waterfront.

And when I say good, I mean very good.