The Uphill Battle of Fire Side Public House

The new pub, located in the former home of Station Street Hot Dogs, will have a tough time dislodging its predecessor from local (hungry) hearts. 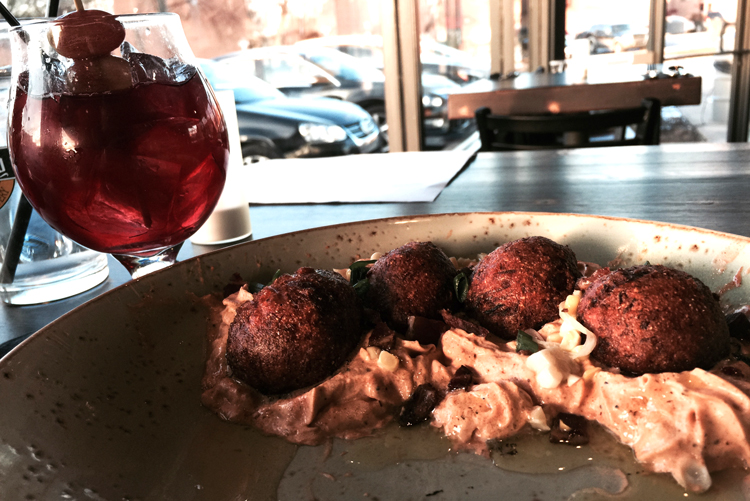 Editor's Note: As several readers pointed out after this entry was posted, Station Street Hot Dogs did not, in fact, have the booths I refer to multiple times below. It seems I conflated the furniture at several previous establishments in that building with the setup at Station Street, which very much did have a throwback aesthetic — but no booths. My apologies for the error.

The closing of Station Street Hot Dogs in East Liberty bummed me out more than most bar and restaurant farewells. I loved the perfect hot dogs and decadent poutine at Station Street; more than that, though, I loved the throwback aesthetic of the place. Station Street did not look like a modern hotspot; it looked like the hangout in a John Hughes movie. The bizarrely shaped building housed straight-from-the-mall booths, with fluorescent light shining through the giant windows into the night.

I wanted to move in.

So I was relieved to learn that another restaurant would be opening up in the space. The Fire Side Public House is still ramping up its hours, promising to open for lunch in the coming weeks. This is not a soft opening, however; they are offering a full menu, a signature cocktail list and 40 rotating taps of mostly craft beer.

As I headed to East Liberty, though, I worried. Can I evaluate Fire Side on its own merits and not in comparison to Station Street? On the one hand, that’s the only fair thing to do; the fact of this restaurant’s place of residence should not affect my judgment. On the other hand, how can I not? One way or another, I’ll be thinking about the building’s former incarnation. It’d be silly to pretend I’m impartial. 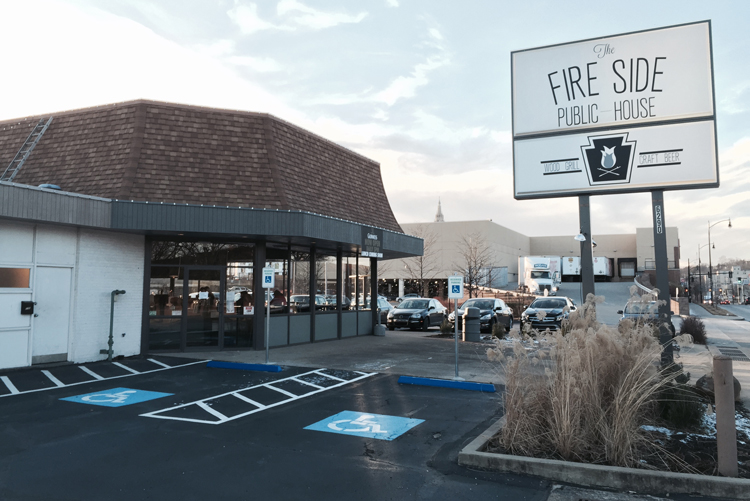 The bad news: I immediately discovered that Fire Side had not maintained the glorious, ’80s-dive decor. Gone were the booths, replaced by small tables flanked by tall chairs. The new setup, with the open bar wrapped around Fire Side’s focal point, a large wood-fired oven, is inviting. But it feels out of place in a building so quirky and distinct. Ever been to a recently opened sports bar that’s clearly been awkwardly shoehorned into a former retail space? It’s kind of like that.

But OK — so I don’t have a hot dog joint that allows me to pretend I was born a decade earlier than I actually was. That’s fine. Fire Side wanted to forge its own identity rather than echo a previous concept (which, not for nothing, only stayed in business for a couple of years).

To the drinks, then: While there is no shortage of places with admirable beer lists, Fire Side exceeds all but the most robust selections in town. I was pleased to find 11 local brews among 40 selections on tap; with the non-locals, Fire Side tends to make interesting choices rather than simply opting for a brewery’s most popular offering.

The cocktail list, however, needs some direction. First: In the name of seasonal fun, every drink on the menu was named for a line from the Will Ferrell comedy “Elf.” Now, I love movie quotes. But I actually considered not ordering the drink I wanted simply to avoid saying the phrase, “I’ll have the Nice Purple Dress Very Purply, if you please,” to my server. Second: They’re trying a bit too hard, tending towards drinks with a laundry list of ingredients. My cocktail — the purple dress one, yes — was satisfying enough, but forgettable. I wouldn’t order it again.

On social media, they tend to push their wings, which I did not try. What I did sample was inconsistent. A hush puppies appetizer was delicious; on that evidence, I’d say go to Fire Side for a selection of small plates. Because the burger I had — the poutine-inspired Quebec Burger, because being in this building makes me need poutine — actually fell apart mid-meal. Not in that it was underdone; the meat just sort of gave up and went its separate ways. (And a nearly paper-thin bottom half of the bun provided no bulwark against this destruction.)

That could be chalked up to a random failing in the kitchen, I suppose, but if I return, I definitely won’t order a burger. Or, in all likelihood, a cocktail. And that’s where the comparison to Station Street is relevant — and, I think, fair. I can’t fault Fire Side for not looking like a scene from “Heathers.” But when so many people loved the previous tenant, Fire Side really should’ve come out of the gate with guns blazing, not with inconsistency. I love the building and the draft list, and there was great promise in those hush puppies. I just hope that Fire Side improves.

And brings back the booths.