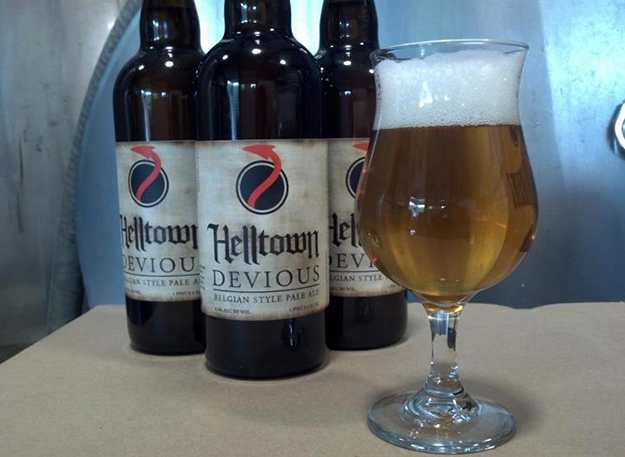 Think about all the summer afternoons you’ve been hanging out with your friends in the garage — milling about, your voices competing with rock music, a cold beer in-hand. Out back, a jump track for mountain bikes. Nothing better, right?

Now imagine that as the setting of your job.

If that vision is reality, you’re at Helltown Brewing, situated in a converted mechanic’s garage at the end of a residential street in Mount Pleasant. That’s where you’ll find founder Shawn Gentry, his brother Tripp, his friends Dan Morris and John King and myriad others as they gather on a September Saturday to bottle their Belgian Saison.

“We brew with love and tenderness,” jokes Tripp.

“I don’t think there’s any of that going on here,” corrects Gentry.

Tripp revises: “We brew with rage and spitefulness.”

Actually, he was right the first time. Gentry works full-time as a manager for a pharmaceutical IT group before putting in sixty hours of brewery time per week. Everyone at Helltown is a volunteer.

Gentry began home brewing six years ago with King and friend Craig Piern. In 2009, he purchased equipment from a brewery in Colorado, where it sat in storage until he found and purchased the building in Mt. Pleasant. Gentry is entirely self-taught — partially from experience as a volunteer at a brewery in Belgium — but mostly from ceaseless work. Oh, and from sampling beer, of course.

“There are a lot of Belgian breweries where it’s more … I hate to call it art, but it’s passed down: what to do and in what situation,” says Gentry. “They’re not all looking through microscopes.”

He might not be calling it art, but Gentry makes it look like it. He’s got a double IPA he’s proud of (acknowledgement of which, his friends say, is a big deal in and of itself). And whatever he’s brewing, he’s doing it right. Helltown isn’t able to keep up with Pittsburgh’s demand, though you can find it at Piper’s Pub, among other locales. Not bad for a former poly-sci major.

As for all the bottles and glasses passed back and forth between the group, “We like really good beer,” says Gentry. King concurs: “You have to drink good beer to make good beer.”