Old World craftsmanship meets cutting-edge technology in the sensitive renovation of one of Pittsburgh's historic homes.

For more than a century, the sunroom at Kathy and Lou Testoni’s stately Tudor-style home in Shadyside had been an untapped treasure. The space was designed in 1902 as a porch covered by a slate roof, and around 1940 it was enclosed with windows. As the next 70 years passed, it was used during the warm weather but lay empty when temperatures dropped.

“We lived with it for 10 years the way it was,” Kathy says, though the couple often discussed winterizing the room. They imagined making the most of this ample space, perhaps sitting by a roaring fire as snow fell outside its walls. But a major roadblock stood in their way: Wouldn’t modern construction ruin the charm and integrity of their 107-year-old home?

Their respect for the home’s history (it was originally built for an attorney named Alexander M. Neeper by the architectural firm of Vrydaugh and Wolfe) seemed to eliminate the possibility of renovating. Kathy, a trustee of Pittsburgh History & Landmarks Foundation, is passionate about the preservation of Pittsburgh’s historic spaces. As a docent, she leads tours of landmark buildings around the city, educating others about the architecture and design of the past.
If her own historic home were ever going to be renovated, she says, “the outside had to look like it’s been there all along.” And the interior—from the windowsills to the ceiling beams to the tiniest bits of decorative woodwork—had to echo the rest of the house.

In 2008, after extensive research and planning, the Testonis decided to take the plunge. They began collaborating with Astorino, a downtown-based architecture and design firm, knowing its reputation for historical accuracy and attention to detail. The long-desired renovation was finally happening.

Once they’d committed, not only did the couple opt to turn the sunroom into a year-round family room, but they also decided to add a 6-by-12-foot breakfast nook to create a roomier eat-in kitchen.

In some ways, says Lou, the kitchen project ended up presenting even bigger hurdles than the larger sunroom makeover. “The small job was more challenging,” he says, “because they had to bump it out and also build an archway to link the kitchen to the family room.” 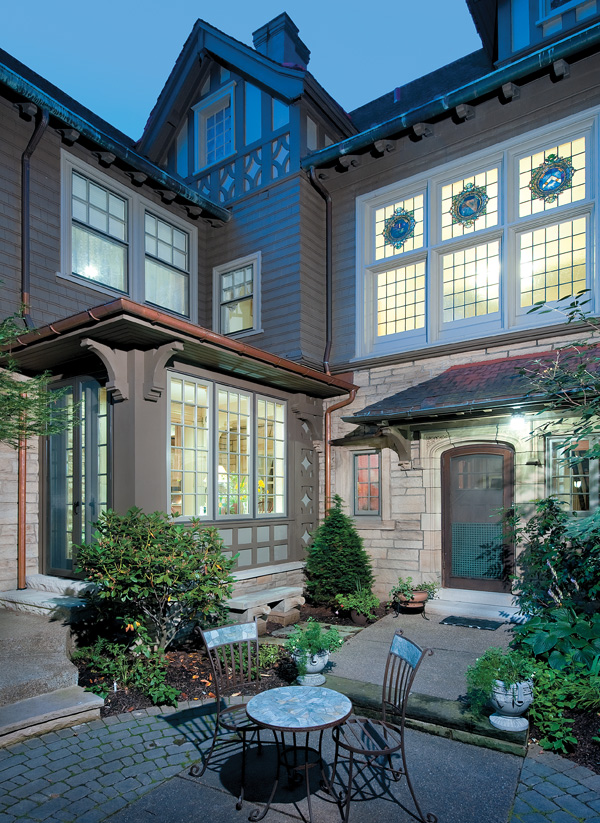 Work on the house began in August 2008 and was completed the following April. To say it was challenging is an understatement. Not only did the final product have to appear vintage, but the methods of working on it had to be equally old-fashioned. “The way the family room was originally structured,” explains Lou, “it had lots of arches and configurations of wood and stone that required them to basically customize everything.”

A few examples among many: Sandstone for a fireplace added to the room arrived in large pieces that had to be cut by hand to achieve the same look as the home’s original sandstone.

“That original sandstone for this house was quarried in Ohio,” Kathy says, so she was thrilled that Astorino used sandstone quarried in the very same part of Ohio for the fireplace. “It matches perfectly,” she says.

Another hurdle: The house has four original chimneys with ornately sculpted tops. Those were built from old-style, decorative bricks that are noticeably thinner than bricks commonly used today. So in creating a fifth chimney for the new fireplace, standard-size bricks weren’t an option. In order to mimic the original design, Kathy says, “they had to cut each brick individually.”

The results look flawless, even to Kathy’s trained eye: “You can’t even tell it’s an addition,” she notes.

Efficiently heating such a large family room—it measures 18 by 21 feet—with high ceilings and numerous windows could have been tough. So the new windows and French doors were designed with energy-efficient glass and maintenance-free exterior cladding. A separate high-pressure heating and air-conditioning system, which functions independently from the rest of the house, was installed for the family room.

The Testonis didn’t want to use radiators in the family room—they would have spoiled the room’s appearance, says Lou—so a radiant-heat system was hidden under the new Brazilian cherry-wood floors. In addition to its decorative appeal, the new fireplace also had a functional value. It’s a traditional Rumford fireplace, more heat-efficient and also somewhat historically accurate than a modern fireplace would be (Rumfords remained popular into the late 1800s, so one might well have been used on a house that began construction in 1900). 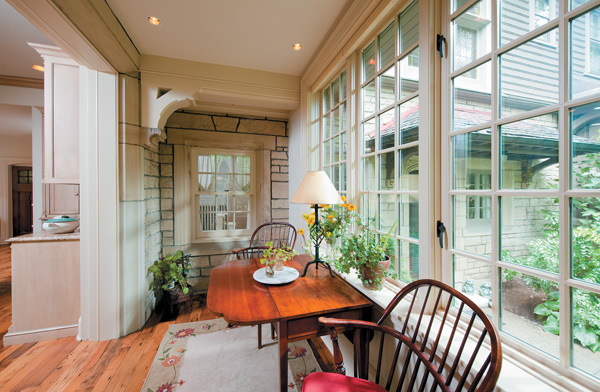 Another nod to modern-day efficiency and energy-consciousness: The slate roof was carefully removed, piece by piece, then the rotting and leaky rafters underneath were rebuilt so that layers of fresh insulation could be added. When that work was done, the craftsmen painstakingly reinstalled the century-old roof.

“It’s impressive,” Lou says, “that they didn’t put their feet through the roof and destroy it” during this lengthy and complicated process.

Falling in Love All Over Again 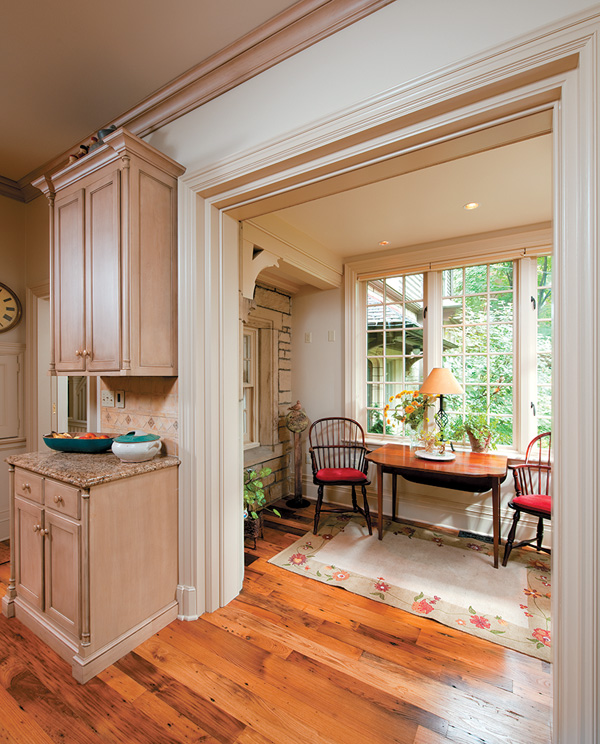 This house has long been a source of happiness for the Testonis: “We really appreciate it,” says Kathy. “We’ll sit in the entryway, where you can see a great deal of the house, and just look at the craftsmanship.”

And now, the newly renovated spaces have become the jewels of this already beloved home. “We live in this family room and in the kitchen now,” says Lou. “Especially the family room—it’s become our place of preference for watching TV and reading, and it’s great all four seasons.”

The couple agree that the challenge of this complex project and the temporary inconvenience of having the work done were small sacrifices compared with all they’ve gained.

“Now,” says Lou happily, “we can sit there and watch the snow falling, something we couldn’t do before.”

This article appears in the Spring-Summer 2010 issue of Home & Garden.
Categories: From the Magazine, HOME + Design