The Ultimate Hater's Guide to the Tampa Bay Bucs

Grab your bathing suit: We’re going on a hate-cation to sunny Florida.

Greetings, haters. What a delightful weekend we have in store. Sun, palm trees, endless lots of foreclosed homes. We’re heading to Tampa, gang!

But first, let’s spread some love to Mike Tomlin. After catching some unnecessary heat this summer for the actions of a small minority (two) of his 53 players, Tomlin has guided the team to an almost improbable 2-0 start despite major injuries on the offensive line (Willie Colon and Max Starks) and defensive line (Casey Hampton).

Better yet, Tomlin has kept the reigns on offensive coordinator Bruce Arians’ aerial obsession and succeeded in reviving a low-risk, run-first attack that has worn opponents down and played to the team’s strength: it’s elite defense. 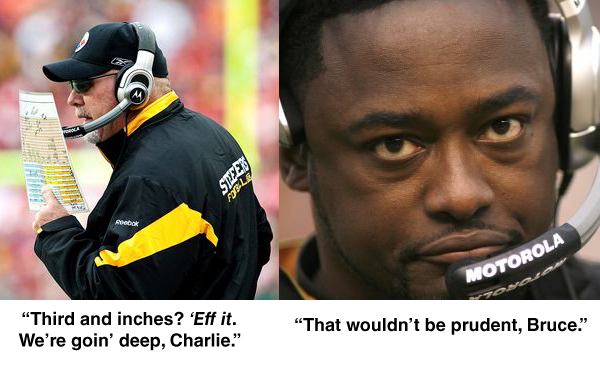 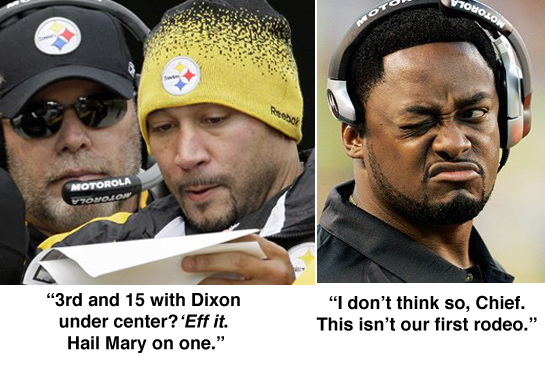 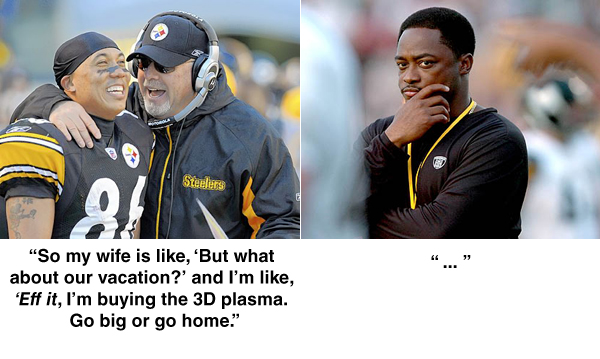 Fact is, the Steelers have out-smarted, out-witted and out-hustled two supposedly playoff-bound teams, and they’ve done it the hard way—the old-fashioned way: in the trenches. Whether you’re a fan of Tomlin or not, he deserves credit for the focused mindset of this football team. And he deserves a fist-pound for having the cajones to go through with the reverse to Antonio Brown on the opening kickoff in Tennessee.

Bill Cowher, for all his strengths, wouldn’t have pulled that stunt in a million years.

It’s clear that the players have taken one of my favorite Tomlinisms to heart:
“We shall defend every blade of grass.”

At 8 a.m. on Tuesday, a day off for the Steelers, linebacker LaMarr Woodley was up early watching film on Tampa Bay quarterback Josh Freeman. If anyone doubted Tomlin’s ability to have this team focused and prepared for success after this summer’s unfortunate events, they’re being proven wrong this fall.

The very real possibility of 3-0 after such a calamitous off-season should make Tomlin an early favorite for NFL coach of the year.

Now on to the Hater’s Guide …

Reason for Hatred #1: The Inhabitants of Tampa

If you’re finding it hard to muster up any hatred for a team that’s so non-threatening and meek, check yourself. Have you ever been to Tampa? It’s a humid, murky, wrinkled mess of curmudgeonly old people, bat-shit Scientologists and young people with bleached hair, a weakness for Smirnoff Ice and an affinity for wearing those weird visor hats that college football coaches love so much. 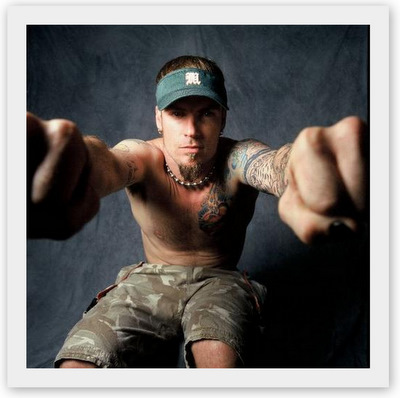 Every dude in Tampa dresses like the love-child
of Vanilla Ice and Jon Gosselin.

I’m only messing with you, Tampa. Your city is cool. But, man, your football team is in for a real wake-up call this Sunday.

Reason for Hatred #2: The Bucs Are Already Overrated

Unbelievably, Vegas’ original line for this game was Steelers (-1). I realize that the Bucs are 2-0 and playing at home in the downright raucous confines of Raymond James Stadium, where, God forbid, some confused, drunk man may take a break from his Blackberry and his Mike’s Hard Lemonade to shout a rallying “Go team!”—only to realize that he’s actually still sitting in his purple Mazda Miata in the stadium lot. 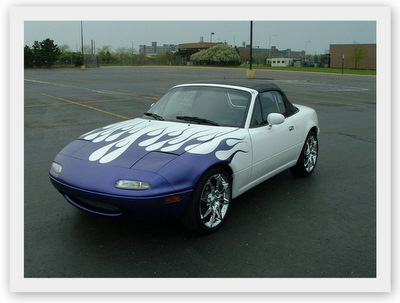 This is every 55-year-old IT manager’s misguided fantasy
of what a mid-life crisis looks like.

This match-up of two undefeated teams will be blacked out on TV in Tampa because the Bucs didn’t sell enough tickets.

Perhaps it’s because the fans realize what the media doesn’t: This team is only 2-0 because it squeaked one out against the Bad News Browns and the Worst Team in the NFL (also known as the Carolina Panthers). Which brings us to our next sobering point:

Reason for hatred #3: Josh Freeman is About to be All Over Your Television

Prepare to have Bucs quarterback Josh Freeman stuffed down your throat. The 6’6”, 250-pound Freeman has been branded by some as the league’s next rising star, and I have to admit, his size, arm strength and uncanny ability to wiggle out of sacks reminds me a bit of Mr. Benjamin Roethlisberger. 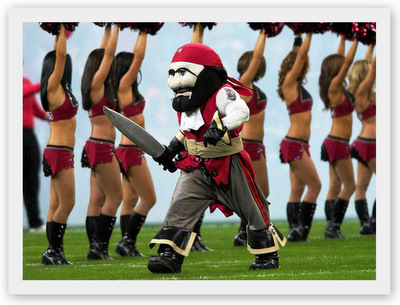 Inside sources tell me Roethlisberger has devised a plan
to make it into Raymond James Stadium on Sunday.
Just call him "Bucco Bruce."

The kid has potential. But fret not, Steeler Nation, because like Vince Young last week, a quick look at Freeman’s stats show that there’s not much to fear.

Freeman has thrown for 14 touchdowns and 19 interceptions in 12 career starts, and has achieved a QB Rating over 100 only twice, playing against extremely weak pass rushes (the Falcons in 2008 and Panthers this season).

On Sunday, Freeman is going to become very familiar with Mr. Woodley and Mr. Harrison, who are quietly becoming the best linebacker duo in the NFL. Since 2008, no duo has more sacks than these two beasts, who have racked up a ridiculous 56 take-downs. 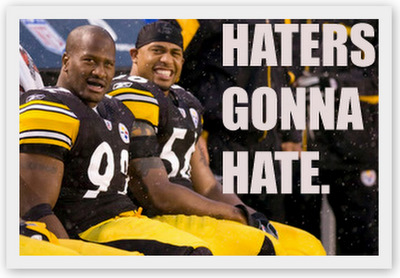 The NFL should just call it quits and move the Bucs to Los Angeles. No one in Tampa cares about the NFL. And I don’t trust people who don’t “get” football. They make me feel uncomfortable, mainly because I pour a ludicrous amount of time into things like managing my fantasy football team and nearly coming to blows with my buddies arguing about the merits of the 4-3 vs. the 3-4.

I realize that I’m insane, but I don’t appreciate it when some free-wheeling hippie starts to preach to me about the philosophical emptiness of sports. 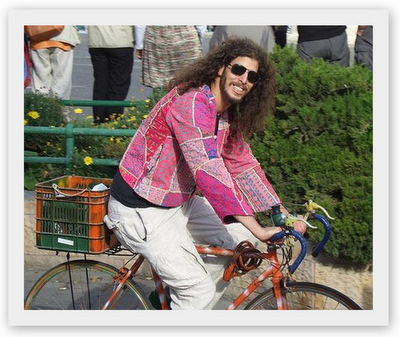 Unfortunately, my girlfriend is from Puerto Rico, and she has yet to come to grips with American Football. So, last Sunday when I was watching Antonio Brown scamper down the sidelines on the opening kickoff, I went a little bit nuts—as I am wont to do.

I was jumping from couch to couch and doing little pirouettes of joy like Johnny Weir.

After I had calmed down from my euphoric joygasm, my girlfriend, who had been completely silent up until this point, turned to me and said, “So, OK, the big guys and trying to push the small guys to the ground … or what?”

Sometimes I feel dumb for caring so much about the Steelers, and then I remember that I was born in Pittsburgh—nay, forged in a molten steel vat and born bearing a birthmark resembling the visage of Chuck Noll. This is simply my lot in life.

And Finally: the Definitive Reason Why the Steelers Will Win This Sunday:

With a showdown against the Ravens looming at Heinz Field next weekend, this has all the makings of a letdown game. However, the Steelers simply need to follow the script that got them to 2-0: Run the ball, make plays on special teams and bring the heat against an unproven quarterback.

Expect Rashard Mendenhall to have a monster game (120+ yards) against a Tampa run defense that was catastrophic last season, giving up a league-worst 4.8 yards per carry.

Your grandpa hasn’t been this happy since you took him to a Hoss’s early-bird buffet, because SMASHMOUTH FOOTBALL is back, baby.

Take it away, grandpa … 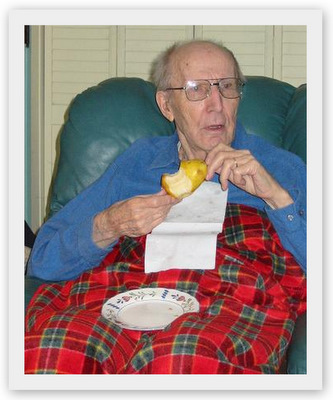