Behind the many faces of Tom Atkins. 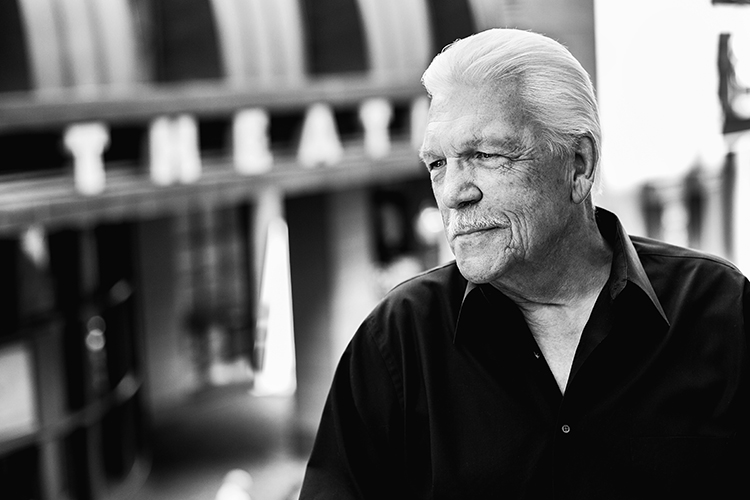 Tom Atkins tells a story about his real-life encounter with Art Rooney. He doesn’t remember exactly where or when it occurred, but when he was only 11 years old, he went to a racetrack with his father. “I have no idea why he took me with him,” Atkins recalls. As strangers placed their bets, he heard his father say, “Hiya, Art. How ya doin’?”

“Hiya, Mose,” replied Rooney, using his father’s baseball nickname. “How are you?”

After some small talk, Rooney looked down at Tom and said, “Who do you like for the daily double, kid?”

Tom didn’t know what a daily double was, so his father advised, “Just pick two numbers out of the races.”

“One and three,” Tom said, guessing the numbers at random.

Several men in coats and hats flanked Rooney, and they all pulled out their betting cards. They marked the numbers and walked away. By astounding coincidence, horses one and three were winners. Hours later, Tom ran into Rooney again, and the man said, “We did alright on that daily double, didn’t we, kiddo?”

“I still had no idea who he was,” Atkins marvels decades later. “I didn’t know for years.”

Nor could he have guessed that he would one day impersonate Rooney in The Chief, a one-man show about the Pittsburgh Steelers founder that has become the most successful stage production in Pittsburgh history. Perhaps “impersonate” isn’t the word; after seven revivals, Atkins has come to personify Rooney.

“We were all pretty anxious,” says Rob Zellers, one of the show’s authors, while remembering that first performance on Nov. 14, 2003. “We knew we had something interesting, and we knew Tom was the exact right person for the role. It was Tom’s voice that we heard in our heads from the beginning. When we finally got to see it with an audience, I remember trying to focus on the words in anticipation of tweaking the script, but Tom was so mesmerizing that he kept taking me off-task. There was a lot of emotion in the room after that first preview.”

For 90 minutes — and through seven revivals — Atkins has told war stories from the father of Steel City football, wearing the iconic horn-rimmed glasses and clutching that famous stogie. The script, co-authored by Zellers and Pittsburgh Post-Gazette columnist Gene Collier, blends theatrical monologue and Steelers mythos. When Pittsburgh Public Theater first presented The Chief, the show was a veritable Immaculate Reception.

Atkins performs in The Chief, Macbeth and A Moon for the Misbegotten.

This is the strange magic of Atkins’ life, filled with the wending anecdotes he recounts with the enthusiasm of a cheerful grandfather. Much of his biography seems random and fortuitous, a pinball machine of happy accidents.

Nothing about his formative years suggests he was destined for the stage: He grew up in a steel-mill family in Carrick; he served in the U.S. Navy; and he graduated from Duquesne University after more than five years. Yet Atkins has become one of Pittsburgh’s most renowned living actors. He is now a theatrical patriarch — a Steel City soothsayer.

This month, in Our Town, he takes on the role of Stage Manager, the omniscient narrator at the heart of Thornton Wilder’s Pulitzer Prize-winning play. No other part could be more natural for the man who has become Pittsburgh’s consummate storyteller.

Millions of people have seen Atkins’ face in films, whether they recognized him or not. They know him as Detective Hunsaker in Lethal Weapon. They know him as Sergeant Hardy in Pittsburgh-set Striking Distance. They know him as Nick Castle in The Fog. (In a scene beloved by horror fans, Jamie Lee Curtis asks him, “Are you weird?” Atkins replies, “Yes, I am. Yes, I am weird.”)

Few of those viewers have any idea who Tom Atkins is in real life. They don’t realize he still lives in the Pittsburgh region, despite many years crisscrossing the country. They don’t know he returned to the Steel City in 1986 after briefly living in New York and Chicago in the mid-’60s, then Los Angeles and Hawaii in the mid-’70s. (“Pittsburgh means everything to me,” he says simply.) They don’t know him as a husband and father. They have no idea how many TV cameos he’s enjoyed, in such shows as “M*A*S*H,” “Oz” and “Xena: Warrior Princess.” They’d never guess he uses “n’at” in regular conversation. They don’t know him as a good-humored guy who loves to reminisce and bellows when he laughs. They don’t know about his pride in writing letters, a pastime since his military days.

Even his followers know only segments of his work: His horror fans don’t acknowledge him as a decorated stage actor, and the theater buffs wouldn’t recognize him in My Bloody Valentine 3D. Take away the footlights and the makeup, and Atkins is an astonishingly normal guy. His only constant: a recurring mustache.

The biggest surprise of all is how Atkins discovered acting in the first place: He met a girl.

In the late 1950s, Atkins was studying journalism at Duquesne and taking want ads for the Post-Gazette. (He still describes it as “a wonderful job.”) He started dating a young woman who was involved with the Red Masquers, the school’s student theater company. After a while, Atkins says he started feeling slighted because she spent most of her time at rehearsals.

“Well, come over and join the group,” she told him.

As he recounts this tale, Atkins alights with remembrance. His eyes sparkle; his smile is leonine. Atkins’ recollections are free-associative and easygoing. He seems unperturbed that his former girlfriend became a nurse, married a naval cadet and moved to San Francisco. He even appears off-the-cuff about his early days as an actor: Once he graduated from Duquesne, Atkins considered staying on at the Post-Gazette, but he had enjoyed acting so much that he threw the dice at New York, where he studied at the American Academy of Dramatic Arts.

“Got the first thing I auditioned for,” he says. “A David Merrick Broadway show called Keep It in the Family. Didn’t have to drive a cab or wait tables or tend bar. And then I was off and running from one job to the next.”

In all of Atkins’ recollections, events seem haphazard in a perfect way: He arrives in one city only to land a gig in a different one. He auditions for a particular role and gets cast in another. He meets a movie star, they become fast friends and then never talk again. After shooting a half-dozen movies together, Atkins hasn’t seen George Romero for a long time. So it goes.

Even his future seems footloose and fancy-free. What does he have planned after this busy fall?

“Not a clue,” Atkins exclaims. “I think most actors would tell you that. Not movie stars, but most actors. When I’m doing a job, I almost never know what I’m doing when that job ends.” 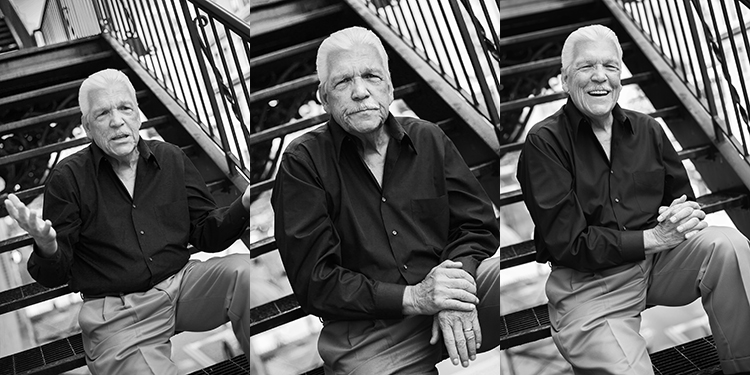 “Got the first thing I auditioned for … And then I was off and running from one job to the next.”

“Tom is very focused in rehearsals,” says Ted Pappas, producing artistic director of the Public. “There is little banter and wasted energy. All of his concentration is on the details of the character. He is extraordinarily calm, quiet and respectful of the text. On the breaks, however, he is full of stories and boisterous jokes.”

Pappas notes that Atkins was part of the Public’s inaugural season in 1975, and Atkins and Pappas collaborated again with the 2000 production of You Can’t Take It With You. Since then, their projects have become more ambitious. Casting Atkins as the Stage Manager in Our Town is perhaps the ultimate compliment — a role so big, so authoritative, that only performers of a certain pedigree are invited to perform it. Atkins came up with the idea for the Public to mount Our Town, but Pappas responded heartily. After all, the Public’s last production of Our Town was nearly 23 years ago.

“I leaped at the chance to work with him again,” Pappas says, “especially on such a profound and entertaining script. Tom was born to play the role. Beyond his artistry, Tom is a ‘draw,’ and by that I mean patrons flock to the Public for the sheer pleasure of watching him perform.”

“It’s a beautiful play,” says Atkins of Our Town. Beyond this statement, he visibly struggles to find the right words. “I always hate to say this kind of stuff, but I think it might be the greatest American play ever written. The part of the Stage Manager — Peter Fonda did it, Paul Newman did it, Hal Holbrook did it.” (Incredibly, after performing the works of such dramatists as Shakespeare, Eugene O’Neill and Martin MacDonagh, Atkins has never before appeared in Our Town.)

The amateur question is how Atkins manages to memorize such enormous blocks of text. Atkins does not disclose his age — sources vary but suggest he’s in his mid-70s — yet he often is given enormous monologues to recite, such as a multiple-page story in a Pittsburgh Irish & Classical Theatre production of McDonagh’s The Pillowman or the extended Stage Manager speeches in Our Town. Indeed, one wonders how any man in his 70s could commit so much material to memory. Atkins does not frown at such a gauche query; he seems equally astonished that the feat is possible.

Most of the world takes place in his home in Peters Township, where he lives with his wife Janis and son Taylor. First, he retypes his lines into a word processor and prints them out. “It’s easier than holding a book,” he concedes. Then he stations himself on the couch in his living room and reads the lines aloud, over and over. The brunt of this toil takes place months before the first rehearsal. In the case of The Chief, the memorization is particularly laborious: Just the spoken lines from the show amount to 24 single-spaced pages of text. “I sit down and grind them out until they’re in there,” he says. “I keep saying them to myself.”

When asked about his late-career role as a paternal raconteur, Atkins laughs almost hysterically. “My wife would tell you, ‘He’s a terrible storyteller.’ I am able to do a really good job onstage, telling stories to people, but not in my personal life. I have a buddy [who] I meet at the Jugo club [in Bethel Park] every once in a while for a couple of beers, and I’m telling him something, and I’ll see his eyes glaze over and start looking at somewhere else, and I’ll think, ‘It’s gotta be me. I don’t know. I thought this was a good story.’

“That’s why actors are actors,” he concludes. “They do the works of playwrights, and they don’t make that [stuff] up for themselves.”

This article appears in the October 2013 issue of Pittsburgh Magazine.
Categories: Arts & Entertainment, From the Magazine, Hot Reads