The Story Behind a Best-Seller

In "The Immortal Life of Henrietta Lacks," a Pitt-trained author chronicles the story of the world’s first “immortal” cells—and their unwitting donor.

When Henrietta Lacks, a poor black woman seeking treatment for cervical cancer, entered The Johns Hopkins Hospital in the early 1950s, her story may have seemed unremarkable. But recounting now, 60 years later, how her cancer cells formed the basis of a medical revolution, author Rebecca Skloot sheds new light on Henrietta’s microscopic contribution that grew to become a significant portion of modern medicine.

After honing her skills in the University of Pittsburgh’s graduate-level creative nonfiction program, Skloot wrote The Immortal Life of Henrietta Lacks, a New York Times best-seller that fuses the story of the Lacks family and the famous HeLa cell line into a vivid narrative. “Science writing is often just about ‘the facts,’” raved a New York Times review, but “Skloot’s book, her first, is far deeper, braver and more wonderful.”

In a passionate tone that does not drift into reading too clinically, Skloot reports the impact of this remarkable medical discovery with unforgettable characters and her keen comic eye. Henrietta’s cancer cells—now referred to as “HeLa cells” and named after their donor—were the first human cells to continuously reproduce in a laboratory.

Almost 60 years after Henrietta’s death in 1951, HeLa cells are still grown in culture and have produced more than 50 million metric tons of cells—or approximately the weight of about 100 Empire State Buildings—for a wide range of medical tests. Among the first applications for the HeLa cells was the testing of the polio vaccine at Pitt by Dr. Jonas Salk.

But the Lacks family knew nothing about the replication of HeLa cells until 1971 when a family friend working at the National Cancer Institute told them of the connection. “The family’s feelings are mixed,” Skloot says. “They are proud of Henrietta’s contribution but not happy with the way [the cell distribution] happened.”Skloot set out to unravel the human and scientific story in 1999—but completing the book took 10 years. During that time span, she repeatedly drove her “beat-up black Honda” to rural Clover, Va., to evoke Henrietta’s tobacco-farming youth. She spent weeks digging through historical archives, documenting the scientific discoveries that grew as the HeLa cells flourished and overcoming one of her biggest challenges—befriending Henrietta’s children and grandchildren. Skloot eventually formed a wary bond with Henrietta’s daughter Deborah Lacks, who initially viewed Skloot as “one in a long line of white people” who had approached with questions about the family’s medical history. 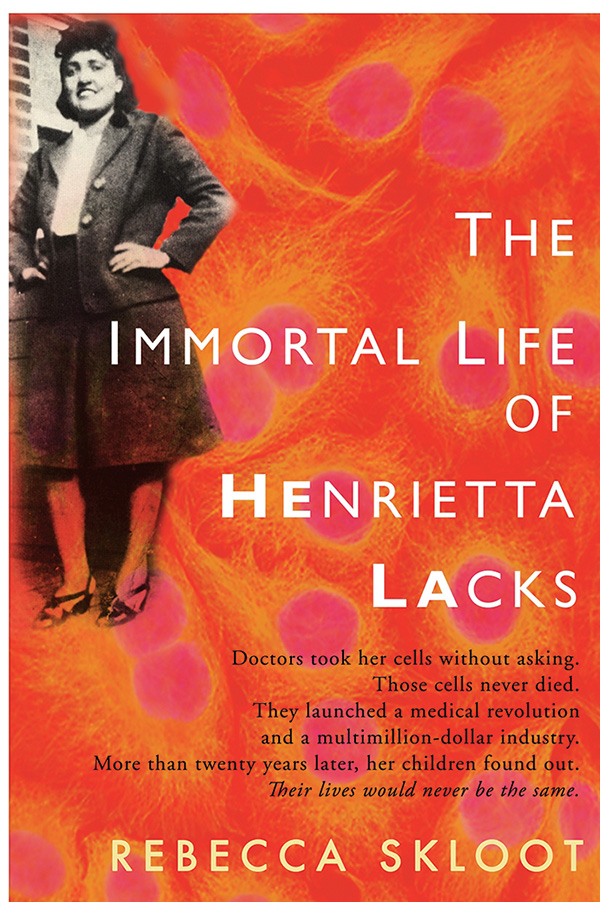 Skloot’s fascination with the HeLa story began in a high school science class and continued through graduate school at Pitt, where she studied from 1999 to 2003. Her studies at Pitt, coupled with her undergraduate degree in biology from Colorado State University, gave Skloot the chops to tackle the complex subject. But she credits Lee Gutkind, who founded the Pitt creative nonfiction program, with encouraging the project. “I came to Pitt knowing nothing about writing,” Skloot says. “It took three years to catch up on things I hadn’t read and learn about the business of writing.”

Skloot gained experience and connections as an assistant editor of Creative Nonfiction, a journal that’s now a magazine, and as a contributor to Pitt Med, the well-regarded science quarterly.

Now a 37-year-old assistant professor of creative nonfiction at the University of Memphis, Skloot continues her writing on science in The New York Times Magazine, O: the Oprah Magazine and other national periodicals. She also blogs at Culture Dish (scienceblogs.com/culturedish).

Pittsburgh was a February stop on the book tour that Skloot will continue through June. Wherever she speaks, she encounters the same question: Wasn’t it illegal for doctors to take Henrietta’s cells without consent? Her answer remains constant: It wasn’t then, and it isn’t now.

“So many issues raised in the book are relevant today. The process of getting consent for tissue research is still unclear. We simply sign blanket consent forms,” she says.

“Yes, it leads to science’s most important advances, like vaccines. But should access to the cells be free? It’s part of the bigger debate about bioethics and health care.” The question remains, Skloot says, “How do we learn today from what happened?”

This article appears in the May 2010 issue of Pittsburgh Magazine.
Categories: Arts & Entertainment, Things To Do