The Soundtrack to Downtown — by Chico Marx

Rick Sebak breaks down the many connections between the legendary pianist and comedic performer and Downtown Pittsburgh. 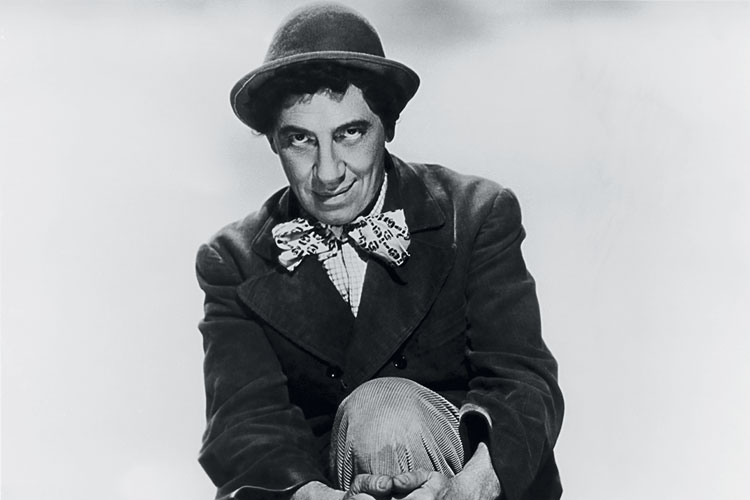 You know the Marx Brothers. They really were brothers — America’s greatest comic siblings — and they all were born in New York City.

The eldest of the famous Marxes was Leonard — better known as Chico — and with minimal instruction, he became an accomplished and distinctive pianist in his teens. Some of his earliest jobs were playing piano in movie theaters to accompany silent pictures (supposedly even once replacing George Gershwin, whose playing wasn’t popular among patrons). In the days before phonograph records and radios, when sales of sheet music were the only measure of a song’s success, he was hired by the music publishing company of Shapiro, Bernstein & Co. in New York to play in its store. He would accompany singers known as “song pluggers,” who showed off new songs to entice people into buying the music.

The young Chico was so skilled at promoting songs, Shapiro, Bernstein & Co. asked him to move to Pittsburgh in 1907 to manage its music store at 302 Fifth Ave. He hired singers here and played to allow customers and passersby to hear new songs, undoubtedly adding bright sounds to Downtown streets. That year, he also composed an original hit song titled “Mandy,” which was published here. The next year, Maurice Shapiro died. Chico decided to move back to his hometown.

By 1912, he and his brothers had put together a vaudeville act and soon became known for their wacky combination of comedy and music, using improvisation, satire and songs to win over audiences. In 1914, all of the Marx Brothers came to Pittsburgh while touring the country with a new play titled “Home Again.” It was on that trip that Chico met a young Pittsburgher named Betty Karp, whom he would marry three years later.

In the 1920s, the Marx Brothers became Broadway stars. When Hollywood started making “talkies” in the late ’20s and early ’30s, the boys grew into movie stars. They started with adaptations of “The Cocoanuts” in 1929 and “Animal Crackers” in 1930, both of which had been born as Broadway productions with scripts co-written by Pittsburgh-born playwright George S. Kaufman.

Throughout the 1930s and 1940s, the Marx Brothers became icons of American cinema. Chico played the piano at some point in almost every movie, demonstrating his dexterity by playing with one hand, sometimes using a grapefruit to roll across the keys and often playing notes by pointing his finger like a pistol.

When their movie-making days slowed down, Chico put together a band and started touring America. The Chico Marx Orchestra played at the Stanley Theater (now the Benedum) in March 1942, and the show was broadcast on WCAE radio here. Then in November 1949, Chico was back as a solo celebrity piano player to perform for a week at the Carousel, Jackie Heller’s nightclub on Liberty Avenue (approximately where the Arcade Comedy Theater is now.) He must’ve impressed; he came back in August 1951 to help re-open the Carousel, performing two shows every night at 8:30 and 12:30. Ten years later, in October 1961, Chico Marx died in Hollywood.

It’s still fun to think of him as a 20-year-old tickling the ivories Downtown. His old music store was on the block of Fifth Avenue, where the new Tower at PNC Plaza sits today. His piano probably was not far from where the cool, fun-to-watch sculpture known as the Beacon sits in the lobby. I think it could be a fitting memorial if we started calling the Beacon “Chico” in his honor.

This article appears in the October 2016 issue of Pittsburgh Magazine.
Categories: Rick Sebak