The Smiling Moose: Best Bar on the South Side?

This labor of love might just be the most agreeable, everything-to-everyone bar on East Carson. 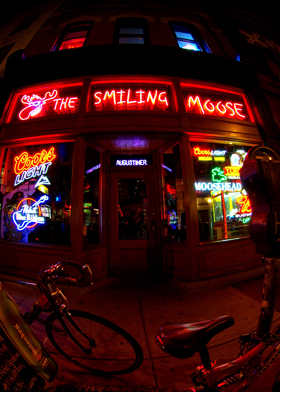 Among the many, many bars lining East Carson Street and surrounding environs — a number that eclipses the number of coffee shops in Squirrel Hill and the number of fast food joints along Route 8 combined — there are very few places that are worth visiting at absolutely any time. That is to say, there aren’t many “anytime” bars. There are some you visit for food. Some you visit to get wasted. Some you visit to dance, to mingle, to party. Some you go to for the game. Some where you can just hang out. Some for lunch. But precious few that can be all of those things.

Surprisingly, improbably, it seems that The Smiling Moose has become the most agreeable, everything-to-everyone bar on the South Side.

The nine-year-old establishment, named after a long-shuttered Michigan watering hole, is the passion project of Mike “Scarfo” Scarlatelli. For nearly a decade, he’s been tweaking and remodeling (the place has been partially or completely rebuilt four times since it first opened) and now, Scarfo believes he’s found the right balance.

On the first floor, the long bar stretches deep into the building, giving way to a cozy seating area in front of a giant projection screen (necessary for Penguins games, since Scarfo and most of his regulars are hockey fanatics). A small stage sits under the screen, for comedy open-mics (Tuesdays) and karaoke (Wednesdays.) The first floor is dedicated to food, drinks and relaxation; the second floor, still being rebuilt once again, is the occasionally-raucous performance space half of the Moose. Playing host to punk, metal, rock and hip-hop shows on a near-nightly basis, the second floor was proclaimed the Best Venue in town by BarSmart.com. The second floor is where you can still smoke, where you can dance, where you can get a gig for your up-and-coming band.

But to drop in on the ground floor around lunchtime, a smoky metal show couldn’t be further from your mind. Select a craft brew — with 20 on tap and over 75 in bottles, American crafts are the Moose’s speciality — and check out the menu. The grub at the Moose is far from the usual bar fare. Hungry? Go for the Shrimp Po’ Boy with Red Pepper Mayo and Corn Salsa ($10). Or maybe the Habanero Burger with Pepper Jack and grilled cherry peppers ($9). Thinking healthy? Maybe a Mixed Greens Salad with apple, orange, carrot, cilantro and toasted peanuts ($7), or the Crisp Chick Pea Falafel ($9). And the sliders ($7-9) are all magnificent.

More likely, though, just order one of the many daily specials. You can’t go wrong.

That menu runs for lunch and dinner. If it’s the typical South Side night you’re after, switch from the beer to one of the movie-themed cocktails. Favorites include the Flux Capacitor Fizz, Pinhead’s Punch and The Boom Stick. You’ll notice a lot of horror movie stuff around. Scarfo is all about the horror community, and you may even catch a big-screen ghoul grabbing lunch. Doug “Pinhead” Bradley is a regular. The aforementioned gigantic projection screen, not to mention the Pens diehards lining the stools, make it a great sports bar, too.

Again, whatever you’re looking to achieve by leaving the house tonight, you can get it done at the Moose. Few places have risen so organically into a slot as one of the 'Burgh’s best bars. It’s a labor of love, and it shows.