The Slinky Playing Right Wing for the Pittsburgh Penguins 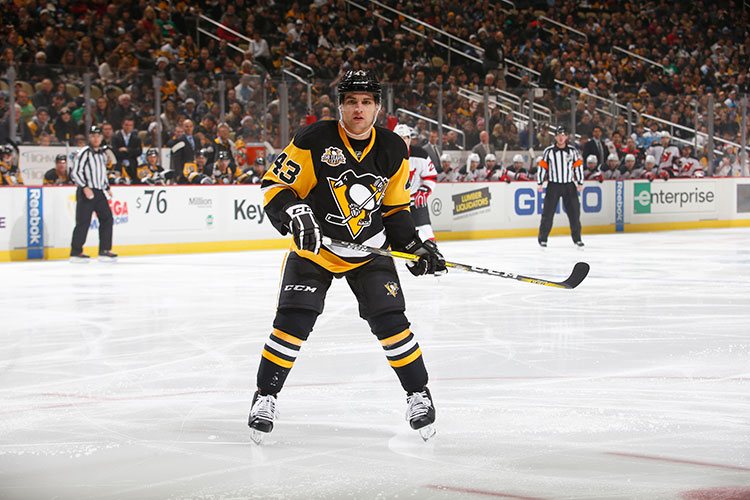 Conor Sheary easily could have grown impatient with certain questions. Queries about his size. Reminders that he overcame going undrafted to make it to the NHL. Unlike many athletes, however, the frequently asked questions don’t bother him.

“I don’t think I get tired of it,” Sheary says. “I always have a good answer because I get asked so much.” The Penguins right winger is listed at a diminutive 5’8”, 175 pounds, although those “official” dimensions in sports often come with a wink.

So what is that standard answer?

“Just hard work,” he says. “If you’re going to outwork someone, it doesn’t matter your size. It’s kind of that cliché saying, but I think if you’re determined to be the best or to be better, you’re going to have things happen.” 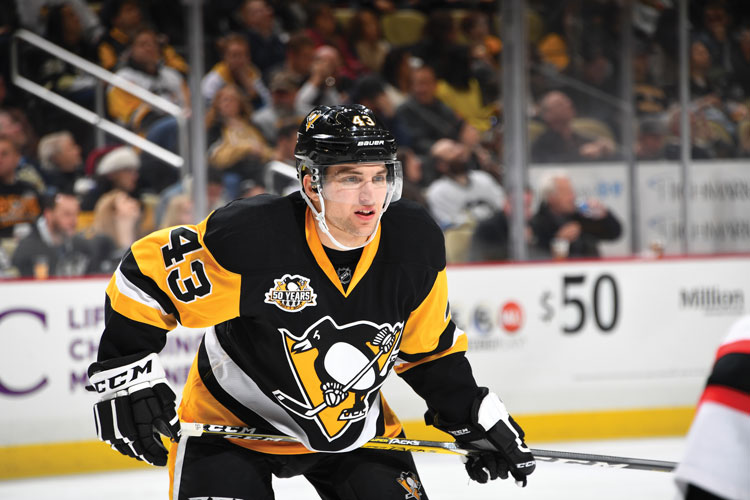 An answer with a little more flair happens on the ice. Sheary, 24, employs speed, that intuitive quality called hockey IQ and a scoring touch. He passed the 20-goal and 50-point marks this year, finishing the regular season with 23 goals and 53 points. He also found a pretty impressive niche.

Star center Sidney Crosby has skated with dozens of wingers in his decade-plus with the Penguins. Finding full-time linemates hasn’t been easy; for several years, Chris Kunitz and Pascal Dupuis were the closest Crosby had to regular wingers on the top forward line.

​Dupuis is no longer on the ice. As a rookie during the 2015-16 season, Sheary began to develop a good rapport with Crosby. That continued this season to the point where Sheary seems to have succeeded Dupuis.

Crosby says that Sheary shares a quality with Dupuis that provides a needed complement. 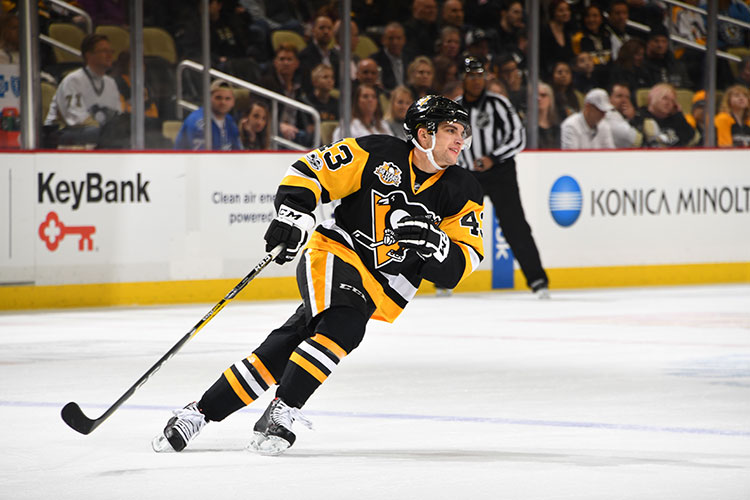 “His speed,” Crosby says. “He’s really quick turning and stopping and being able to change direction. And then he sees the play really well.”

Late this season, rookie Jake Guentzel supplanted Kunitz as the left winger on that line. Like Sheary and Crosby, he is quick and smart. All three are under 6 feet, but Sheary is the slightest.

If hulking defensemen can’t catch you, they can’t hit you. Sheary, however, doesn’t skate away from trouble. The Guentzel-Crosby-Sheary line works because all three play similarly and are especially dogged at working down low — the area around the opposing team’s net, extending to the boards on all three sides. Interchangeably, they dig the puck out of battles with opposing players along the boards, work the puck to one another and create scoring chances.

They do it with no regard for size mismatches, which is critical especially for Sheary.

“It’s his whole mental aspect when he hits the ice — he doesn’t think he’s small,” says assistant coach and former Penguins player Rick Tocchet. “That’s what I love about him.

“When he gets hit, he bounces back. He’s like a Slinky.”

​Sheary, a native of suburban Boston, didn’t have a visible path to the NHL when he went to Massachusetts-Amherst. After becoming the 12th player in school history to top 100 career points, he signed a minor-league contract with the Penguins’ farm club, Wilkes-Barre/Scranton. In ’14-15, he led that American Hockey League team in scoring in the regular season and playoffs, earning a two-way AHL/NHL contract. By December 2015 he was in the NHL for good; last June, he won a Stanley Cup.

Even with a championship to his name, Sheary maintains ambitions off the ice. He was eight classes shy of a hospitality degree when he left college; in the intervening years, he has reduced that to two classes. He would like to open a restaurant. (How does Sheary’s Pub or Conor’s Place sound?) That’s down the road, though; for the time being, there is hockey to play and doubters to silence.

“I’ve always had that chip on my shoulder from when I was a young kid,” Sheary says. “I think I was always overlooked because I was smaller. I think I always knew I had the skill and I could compete with the guys I was playing with. Once you get to the pro level and you have to prove yourself, I think I finally got rewarded for that.”

This article appears in the May 2017 issue of Pittsburgh Magazine.
Categories: Penguins