If you don't like clowns, phantoms, ghouls, zombies hoards and demonized bunnies, just move along. 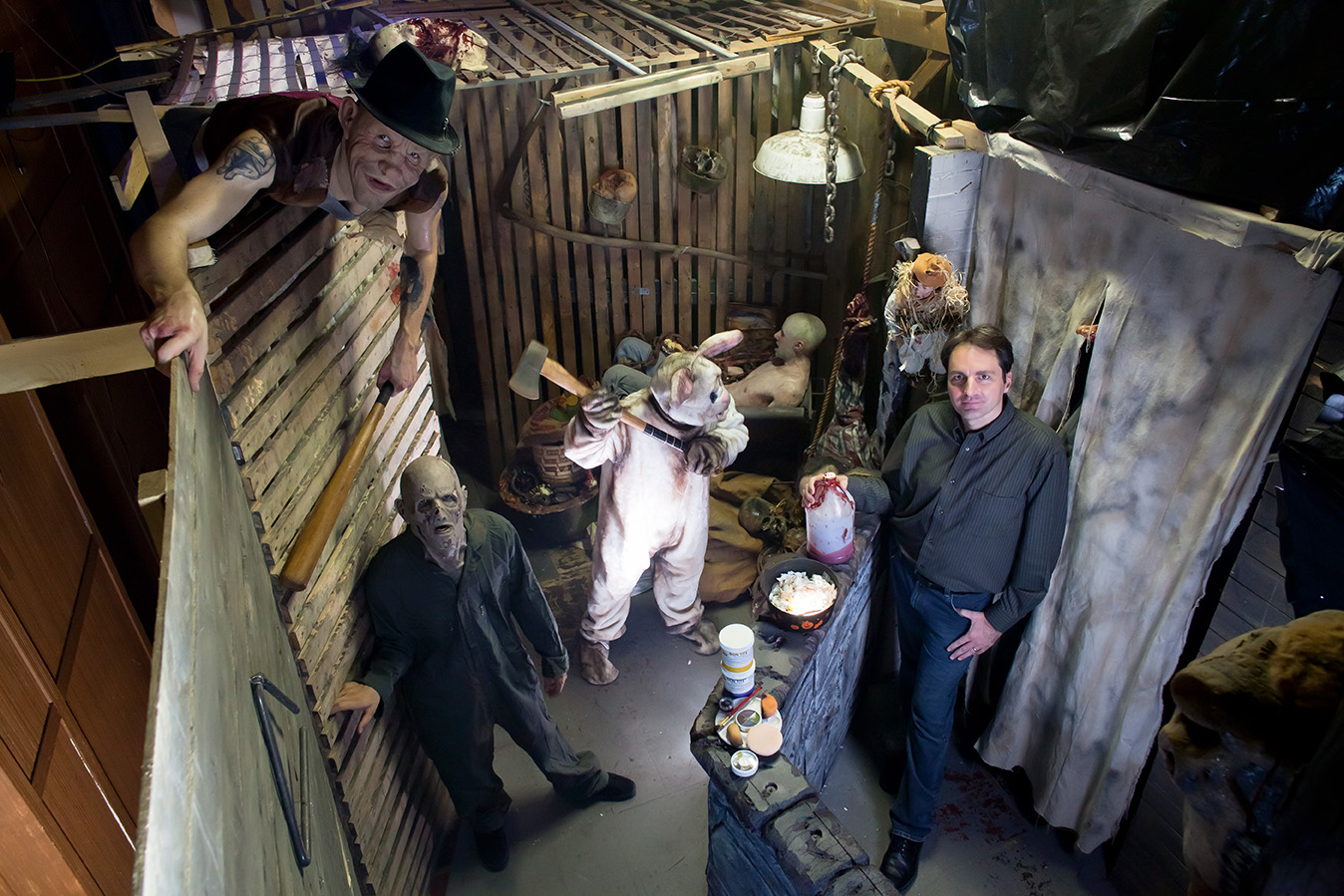 There’s a hot new trend in holiday spillover afoot. Yes, the 2000s were all about the perils of Christmas Creep, but that’s old news; the new fad for 2012 is the growth of the Halloween season. Call it the Jack-o-Lantern Stretch.

Haunted Houses are opening in mid-September. Candy sales start with the NFL season. Big-screen scare flicks begin popping up in cinemas before the summer superhero romps have time to get out. All of autumn is territory for weirdness and horror kitsch.

And I couldn’t be happier.

The bold march into September has been led by the twin towers of ’Burgh fright, The ScareHouse and Hundred Acres Manor. After arguing with myself for years over which was the finest spook site in the city, I’ve finally settled on a compromise: They’re both awesome, and any self-respecting ’Burgher should schedule an annual pilgrimage to both.

We’ve already poked around the dark corners of The ScareHouse in print — including a thorough zombifying of yours truly — so I don’t need to reiterate what an excellent job the long-running Etna haunt does every fall. I should, however, make note of their newest creation, “Creepo’s Christmas in 3D”. ScareHouse owner Scott Simmons was inspired after seeing Christmas decorations side-by-side with Halloween gear in local stores, so decided to combine the two ever-expanding holidays into one, via a demented take on the North Pole. It’s a worthy addition to the ScareHouse’s two other territories, the desolate Forsaken and ever-popular Pittsburgh Zombies.

And in South Park, Hundred Acres Manor continues to push things to the extreme. While ScareHouse proudly and openly admits blending their horror with a little bit of humor — just ask the Bunny — Hundred Acres Manor is dark as midnight, with one harrowing scene following another. (The haunt unabashedly states that they are not family-friendly.) New scenes, including a brutal finale in “Brine Slaughterhouse”, are very much not for the squeamish — but if you can take it, they’re more than worth the trip.

And, amid the gore and screams, it should be noted that Hundred Acres Manor is all for a pair of worthy causes (Animal Friends and the Homeless Children’s Education Fund.) It’s one of Pittsburgh’s most captivating autumn excursions: the anticipation building through the winding line, the terrifying haunts themselves, the mid-trip challenge of finding one’s way out of a dark maze (with ghouls in pursuit), and the generally creepy environs of South Park by moonlight. The fact that you’re doing good with your screams is all the more reasons to grit your teeth and dive in. And if you want to wear your Hundred Acres love all year long, pick up one of the new tees they’ve made with Commonwealth Press.


If you go to two haunted attractions this year, make it those two — but if you go to three (and you should,) add Kennywood’s reliable Phantom Fright Nights to the list. The long-running season extender for the West Mifflin Park features a gaggle of haunted attractions in addition to all of Kennywood’s usual thrill rides; park aficionados should check out Phantom Fright Nights just to experience favorite coasters in total darkness, a special for October. And this year, they’re putting together a deluxe package that includes a full meal, pre-event access to a haunt and more.

Finally, scares of the big-screen variety are plentiful this year, with the much-anticipated Sinister hitting theaters this weekend and the stunningly-still-relevant Paranormal Activity 4 debuting next week. But if you’re the kind of horror fan that sneers at such mainstream frights, I’ve got an under-the-radar flick for you (and very much not for your timid friends.) The horror anthology V/H/S plays the Hollywood Theater in Dormont starting this weekend; a set of five shorts united by a loose premise, the setup harkens back to old multiplex spook sessions like the locally-made Creepshow. The 21st-century twist: all the stories are presented in the found-footage style of Paranormal Activity.

A few of the shorts are genuinely terrifying, all are compelling, and the package as a whole packs a surprising wallop. Please be advised, though: there may not be a more extreme flick in theaters this year. If you’re not a truly extreme horror fan — think I Spit on Your Grave, not Nightmare on Elm Street — keep your distance. If you can take it, though, this’ll be the one you’re telling uninitiated friends about for years to come. Need to pull the blankets up to make it through? V/H/S is on a handful of video on-demand services, including iTunes.

Watch: How to Turn Into a Zombie at The ScareHouse