The Real Deal With James Neal

Get to know James Neal inside and out, and upside down. 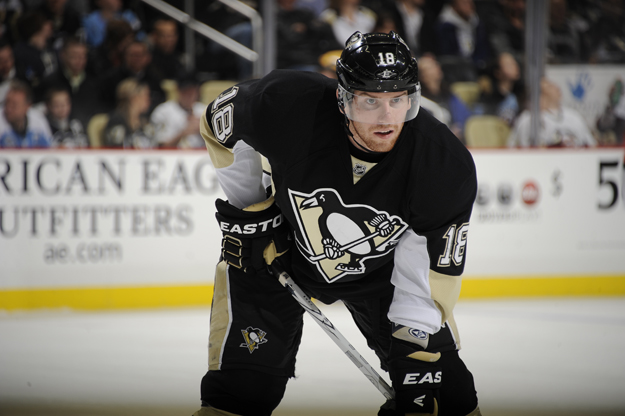 Photo courtesy of the Pittsburgh Penguins

James Neal is hanging upside down, suspended by his feet, gasping for air. The NHL superstars surrounding him are starting to chirp — they’re waiting for him to crack. The air is so thick in the windowless gym that it’s practically visible, and Neal is on the wrong end of a grueling two-hour workout. His glutes are on fire, and unfortunately, the man who helped to knock the Penguins out of the playoffs last season, NHL scoring king Steven Stamkos, is watching to see if Neal makes it through the dreaded scorpion lifts.

“It’s not even Stamkos that I worry about seeing me slacking,” Neal says. “It’s Robs.”

“Robs” is Neal’s trainer, former NHL player and mythological tough guy Gary Roberts. Despite playing only two seasons with the Penguins, Roberts became a cult hero for, among other exploits, challenging an entire Ottawa Senators line to a brawl while referees tried in vain to remove him from the ice. Now, he trains Neal, Jordan Staal and other NHL stars at his gym in Toronto during the summer. It's an intense regimen that includes nutrition. Neal gets all of his meals delivered ready-to-eat from the whole foods grocer Nature's Emporium in Toronto.

"Some guys complain about the food, but I actually really like it," Neal says. "It's mostly chicken, broccoli, some [lean] sausage, stuff like that."

While Neal just recently converted to the full-fledged Scary Gary Diet, he's been enduring Roberts' constructive punishment since the NHL was just a dream.

“I started training with Gary when I was 16, taking the train into Toronto every day of the week and getting back home at dinner time,” Neal says. “With the way Gary played the game and what a legend he is, it was a bit intimidating for a young kid — but he turned out to be the nicest guy in the world.”

Those who say pain is temporary have never done a scorpion lift. But with Roberts egging him on and his competition watching, Neal pushes through the set. Soon, the grueling summer will end and the man who couldn’t buy a goal last season will start lighting the lamp with reckless abandon en route to his first All-Star appearance.

It will seem like magic. Fans will ask, “What happened?” And they won’t realize that Neal’s climb to the top of the NHL’s scoring list started while he was hanging upside down. Every NHL star will tell you that the highlight reel is a big lie. Most goals don't come from breakaways. They're earned in the dirty places, the places most other players aren't willing to go. Neal knows that the maxim extends to the off-season. What's true on ice holds true on land.

“So much of this grind is about conditioning,” Neal says. “A lot of your success starts off the ice, when no one is watching.”

This season, it looks like you’re ready to let the puck rip at any moment. Is that a mental thing?
Yeah. It’s about playing with confidence, wanting the puck, wanting to score. Last year was really tough for me. I wanted to help the team so much that maybe I was gripping the stick too hard. This year I just wanted to come in and prove myself, and luckily I got off to a great start playing with Geno.

Speaking of Geno, he called you lazy on Twitter the other day.
I mean…he’s Geno. It’s a losing battle getting into it with him. He always wins because he doesn’t understand what you’re saying anyway. So I’ll let him get those jabs in if he keeps passing me the puck.

Who’s your favorite guy to make fun of on the team?
Probably Duper [winger Pascal Dupuis]. I sit beside him in the locker room, so it’s an ongoing battle back and forth.

You came over via trade in the middle of last season, which is always a difficult thing. Who did you bond with right off the bat?
Paul Martin. We lived together before I got my house. He’s a great guy—goes about his business and doesn’t say a word about it. We drive to the rink every day together and go out to dinner a lot. I mean, he’s not my girlfriend or anything. [Laughs]

Paul seems to get a lot of unfair criticism from Pens fans. Is it frustrating to read that stuff?
It is frustrating. They give him such a hard time. Paulie goes out and does an unbelievable job every night. He does all the little things as a hockey player. Maybe he doesn’t score much, but you have to think about what he does in his own end, how good of a stick he has and how hard he is to play against. If you really know hockey, you’ll understand how smart and how skilled he is.

Who’s the one roommate you don’t want to get paired with on the road?
TK [winger Tyler Kennedy]. I don’t even want to know how bad he snores. I know how loud he breathes on the bus, so I can’t imagine how loud he snores.

Finish this sentence: If the Penguins win the Stanley Cup this year, it will be because …
All 24 guys play Pittsburgh Penguin hockey for 60 minutes each night through the playoffs.

But is it possible to play “Penguin hockey” night in and night out during the regular season? Can you always get up to play such a physical system?
Let’s say a Sunday afternoon in New Jersey, when the only people there are 12 [Devils fans] and Ben Lovejoy’s relatives in their Lovejoy jerseys — that’s one where it’s tough to get up to play Pittsburgh Penguin hockey. That’s one you need to dig down deep and find a way to get up for.

Fans want to know if you’re going to sign a contract extension to stay in Pittsburgh. What would make you stay? [Editor's note: This interview occurred before Neal signed his six-year extension]
First of all, the fans. You can’t take for granted going out and playing in front of a packed building every night. Plus, the winning attitude around here is something special. There’s definitely no other place where I’d want to play. I want to be a Penguin for a long time. I want to win championships here. Plus, I’ve got Geno passing me the puck. Or Sid. Either is fine. [Laughs]

This article appears in the March 2012 issue of Pittsburgh Magazine.
Categories: From the Magazine, Hot Reads, Penguins