The Pittsburgh Team Names That Might've Been

We've known them for decades as the Pirates, Steelers and Penguins, but for a few twists of fate, the closets of dedicated fans could look a lot different. 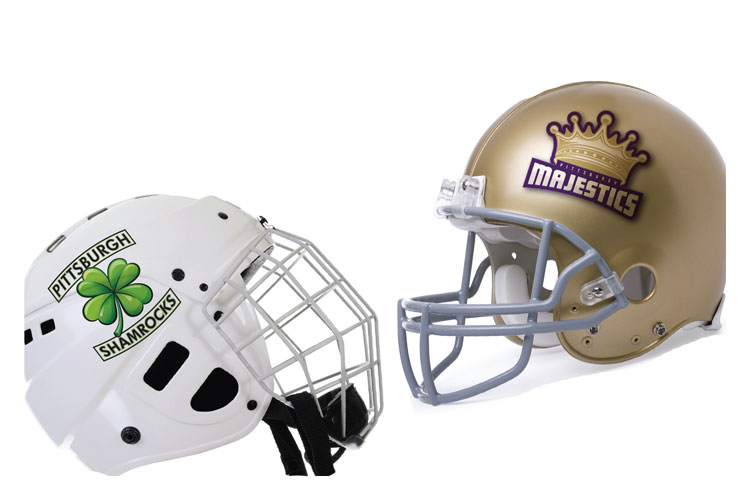 The nicknames worn by Pittsburgh’s storied sports franchises seem indelible — as if they were floating above the Three Rivers since time immemorial, waiting for teams to arrive. Inland Pirates patrol the waters of the confluence; hard-nosed Steelers forge bonds between city, team and industry; lithe Penguins skate across the pond, at home on the ice.

Yet those teams may well have worn other monikers. But for a few twists of fate, the closets of dedicated fans could look a lot different.

The Pittsburgh Pirates have been part of the National League since 1887, but the first few seasons of Major League Baseball in Pittsburgh had no swashbuckling connotation. The Pirates became the Pirates when free-agent second baseman Lou Bierbauer was scooped out from under Philadelphia’s noses before the 1891 season; in an arbitration hearing, a spokesman for the American Association said, “The action of the Pittsburgh club in signing Bierbauer was piratical.” Rather than protest, the team proudly adopted the insult.

Had that spokesman not used that rhetorical flourish, however, the Pirates probably would’ve stuck with their original name: the Pittsburgh Alleghenys. Several nicknames from that era — including the Cincinnati Reds, Philadelphia Phillies and Baltimore Orioles — still exist, so the name may well have persisted. The name doesn’t have quite the same ring to it, but it’s better than that of the team’s early minor league rivals, the Pittsburgh Xanthas. “Let’s go Xans?”

As for the Steelers, they entered the NFL as … the Pittsburgh Pirates, sharing a name with their civic counterparts. A year after a 1940 business deal shuffled players and offices, Art Rooney decided a contest to re-name the team was in order. (According to legend, the name was actually suggested by Rooney family friend Margaret Carr.)

That team was not, however, Rooney’s first; he promoted a variety of semi-pro teams before the NFL was born. Perhaps the best-named of those early squads was the Pittsburgh Majestics, so called due to a sponsorship deal with Majestic Radios. (In fact, the team was frequently called by that longer name — the Majestic Radios.) Could the Majestics convey the hard-nosed spirit the Steelers always have? Perhaps not. But the uniforms would have been great.

Unlike the Pirates and Steelers, the Pittsburgh Penguins have been the Penguins since they crawled out of their eggs. That doesn’t mean the name was an open-and-shut case, however. There was some support to revive the name Hornets, used by a Pittsburgh AHL team for decades. And while the Penguins name caught on quickly, it wasn’t the first choice of inaugural General Manager Jack Riley; he pushed to call the squad the Pittsburgh Shamrocks.

Only one problem there: As was the case this year, there is occasionally a hockey game on the day of the St. Patrick’s Day Parade. And if the Pittsburgh Shamrocks were playing on St. Patrick’s Day, I’m not sure Downtown could contain the ensuing party.

This article appears in the May 2019 issue of Pittsburgh Magazine.
Categories: From the Magazine, Hot Reads, Sports