After two years of virtual races, the Pittsburgh Marathon is coming back with a bang. 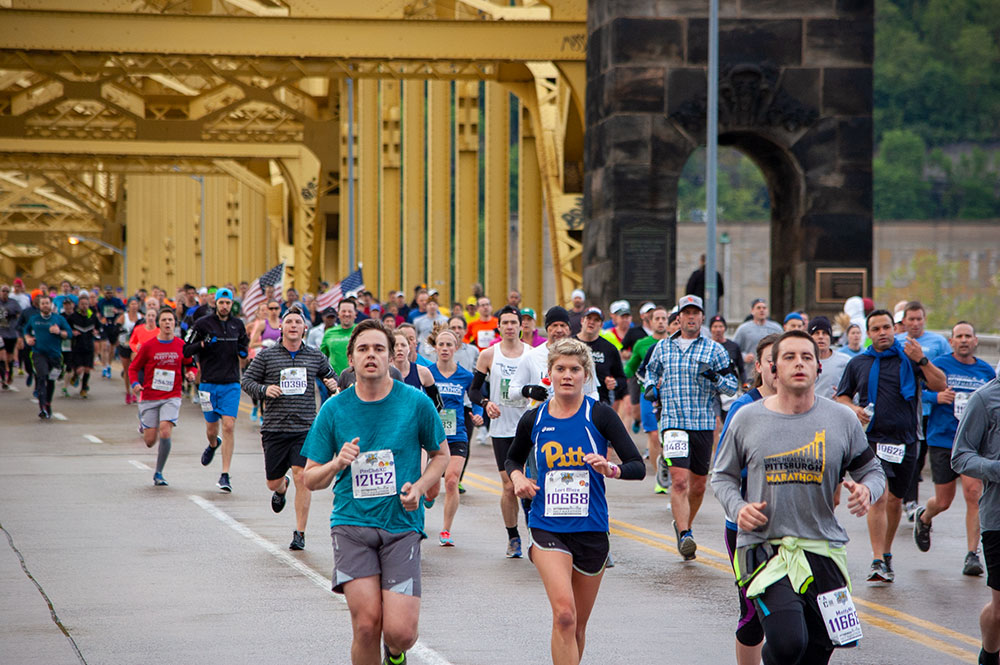 On May 1, thousands will descend upon the streets of Pittsburgh donning sneakers, running gear and safety-pinned race bibs.

The occasion? The first in-person Pittsburgh Marathon in three years.

After COVID-19 forced P3R to move its marathon online in 2020 and 2021, Allison Corbett, senior vice president of marketing and communications, says the nonprofit is excited to finally host in-person races again.

This year’s race weekend isn’t just going back to its pre-pandemic normal — it’s getting even bigger. In addition to the 5K, Toddler Trot, Kids Marathon, Pet Walk, Marathon, Half Marathon and Marathon Relay, P3R is adding two events to the schedule, both of them variations of the half marathon.

For the first time, a limited number of half marathon participants can qualify to run their 13.1 miles in the Back Half Marathon, which starts halfway through the 26.2-mile marathon course.

“Those runners who typically do the half marathon have only seen the first 13 miles of the marathon course and they’ve never seen the quote-unquote ‘back half,’ so they’ve given us that feedback, ‘I never get to see that piece of it,’” says Corbett. “So we were like, ‘Oh, well, what can we do to introduce this new event? And how can we make it super meaningful?’”

Runners who want to participate in the Back Half Marathon must register for the Half Marathon, sign up to fundraise for an official Run for a Reason charity and indicate their interest in running the back half. As soon as runners are registered, they set up a fundraising page and get to work raising donations for the charity of their choice.

To qualify, participants must raise at least $1,500 for their charity, at which point they automatically earn their spot in the race. Sign-ups for the Back Half Marathon will be open until April 15, or when 500 people hit the fundraising minimum — whichever comes first.

The second addition is the Walking Division of the half marathon. Of course, you could always walk during the regular half, but the official Walking Division will allow for more time to finish the course.

This new event is meant to get more people moving, even if they aren’t ready to run the full 13 miles.

“Our mission at P3R is to inspire any and all to move with us, and we just want to break down barriers to people moving, to people participating in healthy activity,” Corbett says. “So we had this idea for the Walking Division to make it possible for more people to move, that you didn’t have to train for four months to run a half marathon if maybe you weren’t ready for something like that.”

Corbett says she hopes the Walking Division and the Back Half Marathon will return next year, with walking options possibly becoming available in more events.

On top of the two in-person additions to the weekend’s lineup, P3R announced in March that they will offer a virtual option for seven race weekend events — everything but the Back Half Marathon. According to Corbett, the virtual option was added at the request of runners around the world who couldn’t come to in-person races.

“The fact that people are still interested in running virtually, even though they can’t make it Downtown or make it to Pittsburgh … is incredible, and it’s really uplifting to know that they still want to participate,” Corbett says.

Those running their races virtually can start wherever and whenever they want, and their race souvenirs — including their medal, shirt, bib and more — will be shipped to them about one week after Marathon Weekend. For some virtual course ideas around Pittsburgh, check out the Pittsburgh Marathon website.

Runners who take on both the 5K on Saturday and the Marathon, Half Marathon, or Marathon Relay on Sunday will complete the STEEL Challenge, earning themselves an extra medal. According to the Pittsburgh Marathon website, the 2022 STEEL Challenge is already sold out, but runners can still sign up — they’ll just get their challenge medal in the mail after race weekend.

Registration for all race weekend events — including virtual races — was originally slated to close on March 31, which was also set to be the last day for transferring registration from an in-person to a virtual event. But registration has been reopened; according to the race’s website, registration for Saturday events — including the 5K, Kids Marathon, Toddler Trot and Pet Walk — will be open until 8 p.m. on Friday, April 29. Registration for Sunday events — the marathon, half marathon and marathon relay — closes at 6 p.m. on Saturday, April 30. There will be no race day registration. The fee to transfer/switch events is $14, and that fee will increase to $30 on April 29. For the marathon relay, the deadline to add members to your relay team is Thursday, April 28 at 11:59 p.m. You can still add members after that deadline, but there will be a $50 fee per new team member.

As Marathon Weekend gets closer, Corbett says the energy and excitement of the P3R team is only growing.

“Everyone’s excited, like it’s actually palpable, and the excitement just increases here in the office every day,” says Corbett.