The Pirates Lost, and Twitter Went to Hell in a French-Fry Basket 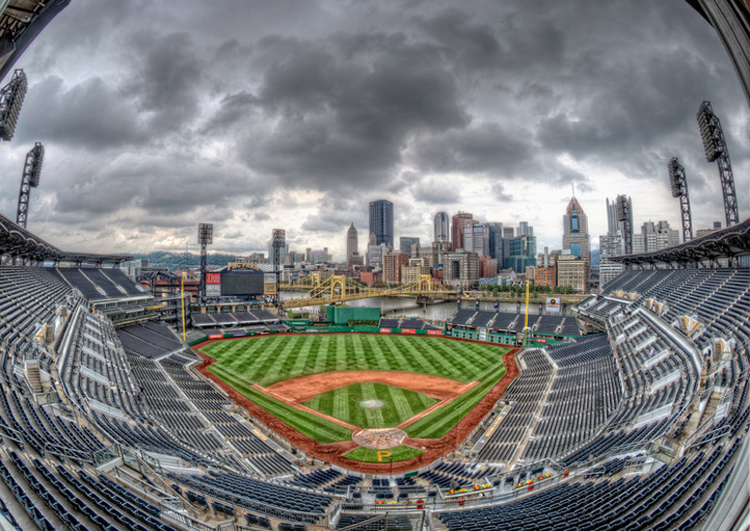 I don’t need to write about the Pirates or the Wild Card game. We contended. Again.

It’s that “again” that’s so important. We are not a fluke. We are a legitimate baseball club. Worthy of Roberto. Worthy of Maz, Honus and Teke. Worthy of the Jolly Roger and all of its pirate lore. Worthy of the devotion of a legion of fans. Worthy of this beautiful ship we’ll sail again in April.

We will dock it with the expectation that the Pirates Baseball Club will offer Russell Martin nothing short of a free trip to space with a monkey-butler should he desire one, if he will just stay a Pirates player a while longer.

We will question management decisions until this season fades, drowned out by the light of promise of the next one.

So I don’t need to write about the game, your fanhood, my fanhood, the quiet, that grand slam *vomit*, fans who left early, that a single Pirates player didn’t grace home plate. Let’s, like Tony Sanchez, let it go.

As we watched the 2014 season fade away with each Giants run, Pittsburgh Twitter lost its mind in spectacular fashion.

First, Dejan Kovacevic, a blogger and former Pittsburgh Tribune-Review and Post-Gazette sports reporter, essentially gave birth to a Twitter-storm against Pittsburgh Dad, who appeared in a skit on the Jumbotron during the game: 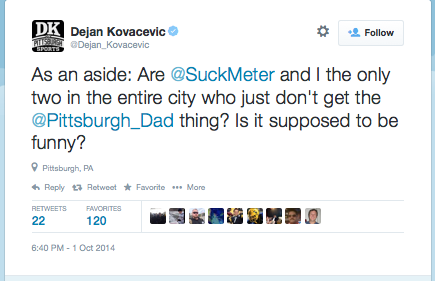 Curt Wootton (Pittsburgh Dad) and producer Chris Preksta, who attended the game, were treated to hundreds of insulting replies. And suddenly . . . Batman!

Then, perhaps feeling lonely or worried that the city had forgotten he still existed, Luke Ravenstahl (remember him?) decided to do what Lukey does best: make poor decisions. (And no, that’s not a petty insult. I can prove in long-form writing with a complete bibliography that he does indeed excel at making poor decisions.)

I’ve seen M.C. Escher paintings that are easier to follow.

This tweet was just the beginning of what would become a flurry of hilarious, frat-boy tweets from the former mayor directed at those who responded. Lots of LOLs, hashtags such as #keepgrinding, calling out others for their low number of followers, issuing a challenge to compare W-2s with a local blogger . . . and this:

And then to bring the whole Twitter fiasco full circle, Luke chimed in on the Pittsburgh Dad debate:

Funny or not, can you ever in your life imagine Sophie Masloff or any former mayor of Pittsburgh acting in this fashion? Hell, had she been on Twitter, Sophie would have been tweeting things she meant to Google. “Bruce Bedsprings.” “Wholesale hairspray.” “How to treat hacksaw scratches.”

It all left a bad taste in my mouth. The loss, yes. The meanness, too. Have we forgotten we’re Pittsburghers? We’re neighbors? We’re the town of Mister Rogers and that, in the end, we all want the same things — a stronger Pittsburgh, winning sports teams and, most importantly, a dependable monkey-butler for Russell Martin. Do you know where we can get one?

If you do, email Bob Nutting immediately.

And while you’re at it, ask him what he thinks of Pittsburgh Dad.

This article appears in the September 2014 issue of PittGirl.
Categories: PittGirl