The Physicist and the Fairytale House

Noted scientist Rae Stiening grew up in the fanciful Tudor-style home in Mt. Lebanon that features a turret as well as a 6-foot stained glass window of D’Artagnan. 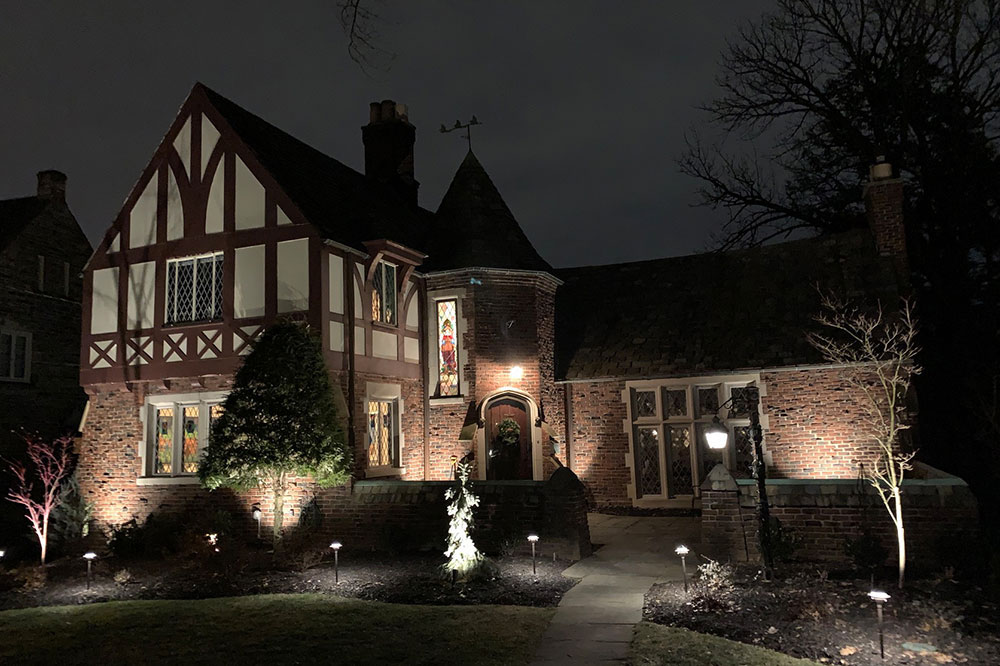 Amid several gravely impressive stone manor-style houses on Hoodridge Drive in Mt. Lebanon stands one fanciful brick half-timbered Tudor-style home with a turret for an entrance.

With its steeply pitched slate roof, arched doorways and diamond mullioned windows, it seems pulled from a Brothers Grimm storybook. But the fairytale dwelling is only eight decades old, and the little boy who first lived there grew up to become a scientist, smashing atoms and mapping the galaxy. 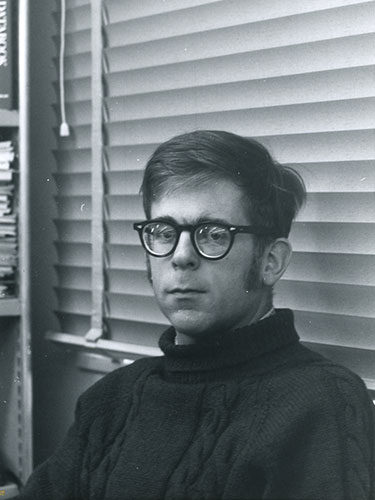 Rae Stiening was 2 years old when his family moved into their new home on Hoodridge. The architect was a local professional named William Young, but Stiening says his mother was chiefly responsible for the look of the house and its many decorative features. Its two-story turret atrium is lit by a cast-iron chandelier that matches the stairway banisters and also by a 6-foot stained glass window of D’Artagnan from “The Three Musketeers.” Hand-plastered walls are sprinkled here and there with unobtrusive reliefs of animals, flowers and medieval symbols; similar heraldic imagery adorns stained glass panels in the windows.

“She devoted herself to creating kind of a fantasy place,” Stiening says of his mother, Beryl Rae. The daughter of a prosperous Pittsburgh construction contractor, Rae was educated at Carnegie Tech and earned a master’s degree in psychology from the University of Pittsburgh. She never practiced; instead, she married Frank Stiening, a mechanical engineering professor at Pitt whose father also was an engineer, and became a full-time hostess, showing off the house to guests at frequent cocktail and dinner parties and letting their live-in maid take care of the housekeeping.

While his mother bestowed on her son her maiden name — “It’s a nightmare, but I’m too old to change it,” he grumbles — he says she never explained to him the meaning or significance of her decorative touches. For instance, the entry foyer has inlaid tiles of the seals of Guatemala and the Dominican Republic alongside medieval knights, but why remains a mystery to Stiening.

“While my parents were busy partying, my uncle took over the job of actually educating me as a child,” he says. “He got me started in science, and it was a wonderful thing to do.”

The boy spent hours in the Dormont workshop of his uncle Fred, an audio engineer, tinkering with him on radio sets and other experiments. It paid off: In his senior year of high school, Stiening won first place at the 1954 Buhl Planetarium science fair, beating more than 1,000 entrants. He went to the Massachusetts Institute of Technology and became a particle physicist with a long career at top laboratories and research facilities in Berkeley, Stanford, Chicago, Texas and Switzerland. Stiening says his proudest achievement was 20 years ago when he led a team that assembled the first high-resolution infrared survey of the Milky Way and other nearby galaxies. Now retired, he lives with his wife, Nancy, in Cambridge, Massachusetts. 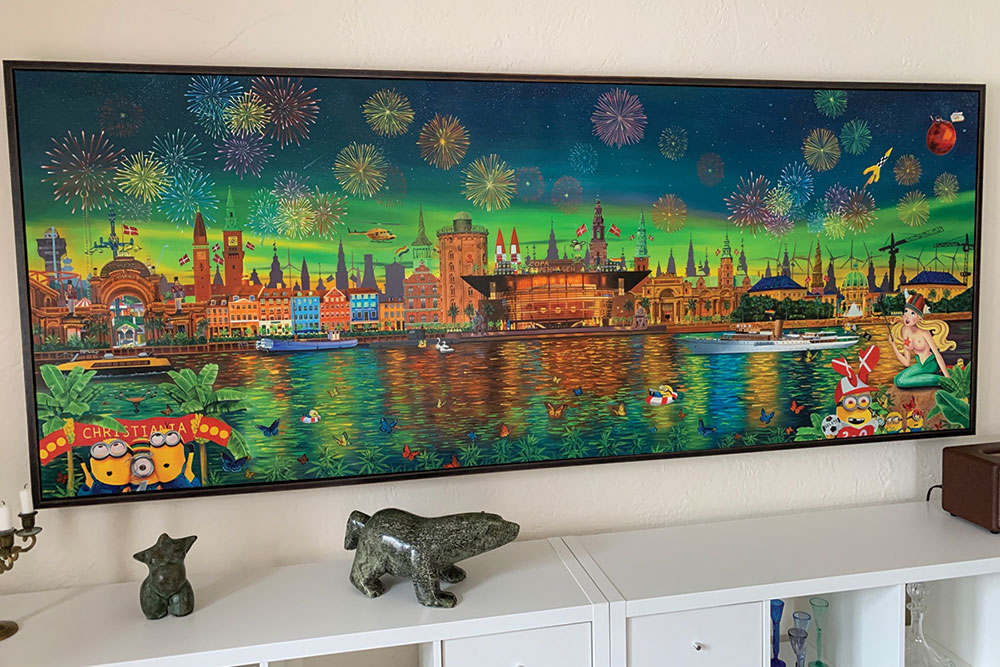 A Danish family lives in his childhood home now. Stig and Maiken Panduro moved to the United States about 20 years ago when Microsoft acquired the software company where Stig worked. For about 10 years they lived in Seattle, where their children, Andreas and Frederikke, were born; they then relocated to the Upper West Side of Manhattan. When Stig got a job offer from a Pittsburgh company in 2016, Maiken was not eager to leave New York. Then she stepped into the dramatic two-story atrium at Hoodridge and changed her mind.

“Ten seconds after she walked through the door, she said, ‘OK, I will live in Pittsburgh, but only in this house,’” her husband recalls. 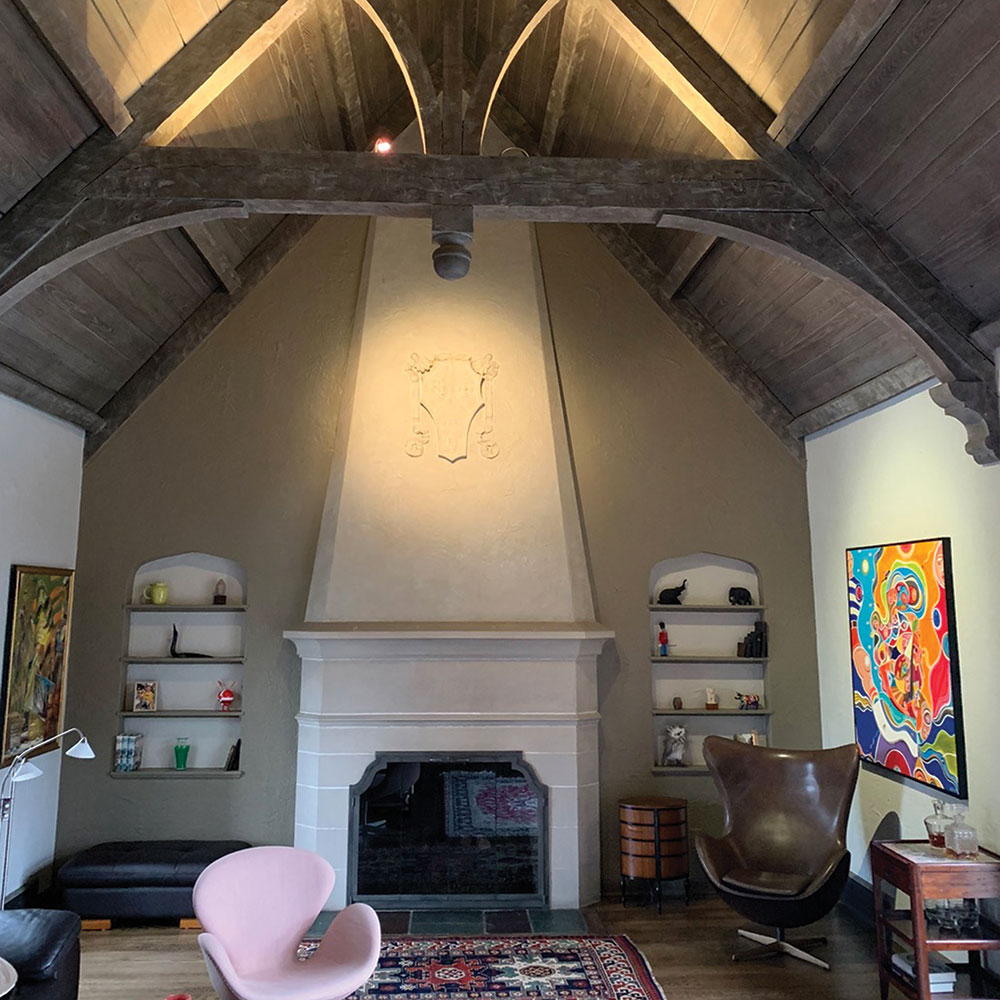 The Panduros especially love their large living room with its limestone fireplace and high vaulted timber ceiling — which, owing to their Scandinavian heritage, Stig prefers to refer to not as a cathedral ceiling but a “Viking house.” Contributing to the rustic-yet-sophisticated ambiance are pegged oak plank floors covered with Persian rugs. Here and throughout the house, abundant light shows off the Panduros’ collection of sculptures from the Pacific Northwest and an eclectic array of colorful modern paintings.

The largest, in the dining room, is a stylized panoramic canvas of Copenhagen. The cityscape is lit by fireworks and the aurora borealis, and it is inhabited by butterflies and the cartoon Minions of “Despicable Me.” It is one fantasy vision of Europe, housed inside another.

Mark Houser is the author of the new book MultiStories: 55 Antique Skyscrapers & the Business Tycoons Who Built Them.

It's Not Just the View: How Greenspaces Can Make Our Lives Better