The Penguins are Naked and Extremely Dangerous 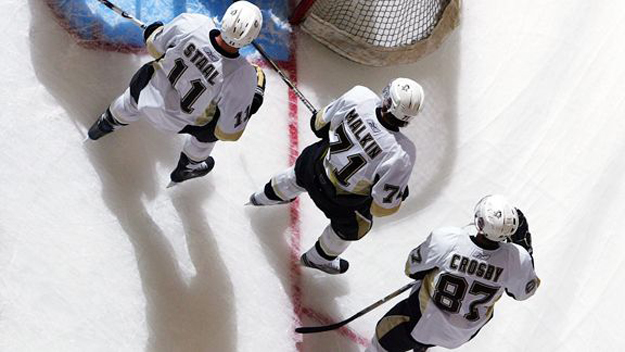 “You can only connect the dots by looking backward.”

This is what the late Steve Jobs told graduates of Stanford University during his commencement speech in 2005, just one year after he had been diagnosed with pancreatic cancer. In his moving address, Jobs’ message was a powerful reminder of our inherent nearsightedness: It’s often impossible to see the forest from the trees in life, because we’re constantly framing our lives in terms of the future. What’s really important is the now, and doing what you love with intense fearlessness.

As hockey fans, we do an awful lot of looking forward. We try to connect the dots by extrapolating players’ point totals like an economic growth forecast, we formulate power rankings in late-July while players are still nursing Moulsons on fishing boats, and we jot down so many monumental dates that our office notebooks start to look like bizarre Bible verse reference guides: Washington: 10.13, Philly: 12.8, Detroit: 12.13.

Jobs was only human. He did a lot of looking forward, too. When Apple turned into a $2 billion company just 10 years after he helped launch it from his garage, Jobs started to feel the weight of success. He felt the unrelenting pressures of tomorrow. The trees became a forest.

Then he got fired.

“I didn’t see it then,” Jobs said. “But it turned out that getting fired from Apple was the best thing that ever could have happened to me. The heaviness of being successful was replaced by the lightness of being a beginner again.”

I can’t help but think of Jobs as the Penguins prepare to kick-off a very important 2011-2012 season tonight in Vancouver, B.C. Since the first Stanley Cup Finals appearance in 2008, the core of the team has remained largely unchanged, and that group has played a tremendous amount of hockey games over the past four seasons. Call it the curse of success.

Then last season, just as the Penguins seemed reloaded on defense and at the height of their offensive powers, everything changed. Sidney Crosby and Evgeni Malkin suffered season-ending injuries, Jordan Staal was just days away from returning from an early-season layoff when he was put back on the shelf by catching an errant puck at practice, and Brooks Orpik quietly struggled through a sports hernia for part of the season.

Reminisce on last season and you’ll likely flash back to the HBO “24/7” stuff: Max Talbot trolling the world in a creepy-Uncle Christmas sweater and Dan Bylsma nailing one-take motivational speeches that inspired Al Pacino to re-enroll in acting classes. (It’s no coincidence a Players’ Association poll taken after the documentary aired had Bylsma as the coach players would most like to play for.)

But the on-ice memories after the Winter Classic consist mostly of Tyler Kennedy scheming goals from weird angles and Chris Kunitz efficiently poking in a bunch of strange rebounds with the Old Pickle-Stabber (© Robert B. Errey).

All in all, it was a painfully boring season. Instead of breaking remotes, you mostly let out a lot of heavy sighs and developed an unhealthy relationship with Debbie Flaherty from the Day Automotive commercials (that exotic Siberian Husky is just begging to be kidnapped for ransom by an unhinged Yinzer.)

Looking back instead of forward, and all the dots start to align. The Scotch mist that has been languishing over Crosby’s head is finally starting to clear. Staal, according to carbon dating, is still only 23-years-old and about to enter the prime of his career with the luxury of being a third-line center. Malkin had to sit helplessly in the locker room for months and watch his teammates on the television, listen to the echoes of the crowd coming from the tunnels and think long and hard about the gifts he has been given; the gifts that were taken away in an instant when he heard his knee pop.

Like Jobs after he was pushed out by Apple, Malkin had to become a beginner again. He flew strength and conditioning coach Mike Kadar to Russia to help him train during the summer, and now he is the first one in the weight room in the morning, according to Kadar. All it takes is one look at Malkin cruising around the offensive zone in Unrealistic Videogame Mode this preseason to realize that the weight of success has been replaced by the lightness of starting over.

He’s smiling like a butcher’s dog again, both in person and on Twitter, where half of his posts are littered with right parentheses, the Russian smiley emoticon.

After being canned at Apple, a newly inspired Jobs started a little company called Pixar. If the reanimated Malkin’s preseason form is any indication, he could be a front runner for the Hart Memorial MVP award, the only empty spot in a trophy cabinet that consists of an Art Ross (scoring champion), Calder (Rookie of the Year), Conn Smythe (Playoff MVP) and Stanley Cup.

While question marks remain—like whether or not big-ticket defenseman Paul Martin can start contributing on the power play in his second season with the team to justify his significant $5 million cap hit, and if Tyler Kennedy can make the tricky leap from a grungy, sneaky-good 20 Goal Guy to a more refined, consistent 25 Goal Guy—overall, something feels right about this season.

Nothing makes you remember how much you love something like it being taken away. As the Penguins sit at their stalls tonight taping up their sticks for the start of another grueling season, and as you anxiously settle in to your couch for the annual roller-coaster of emotions, picture this: Picture your life without it.

Picture Crosby sitting in the bedroom of his parents’ too-silent house in Halifax, staring at his reflection in his idle television. Picture Malkin begging the coaching staff to let him play in Game 7 of last season’s series against Tampa Bay despite doctor’s orders, then helplessly deking a puck in the locker room as the team struggled to score in a 1-0 loss.

Picture what you love being gone tomorrow. Unfortunately, or maybe fortunately, the Penguins’ megapowers were given a long time to look back and connect the dots last season. Like Jobs, they were given a rare glimpse at their own inevitable mortality. This is especially true of Malkin, who lost close friends in the KHL air tragedy.

“Remembering that you’re going to die is the best way I know to avoid the trap of thinking you have something to lose,” Jobs told the Stanford graduates. “You are already naked. There is no reason not to follow your heart.”

Perhaps last season's painful lessons will push Crosby, Malkin and the Penguins to even greater heights.

Enjoy the season—every single game of it, from the scoreless Wednesday night affairs in half-full New Jersey to the barn-burners in hostile Philadelphia. Because this rare genius, this improbable collection of talent in one hockey-obsessed city, is fleeting.