The Penguins are Fighting for Sidney Crosby’s Life

As losses mount for the beleaguered Penguins, some have suddenly lost their compassion. 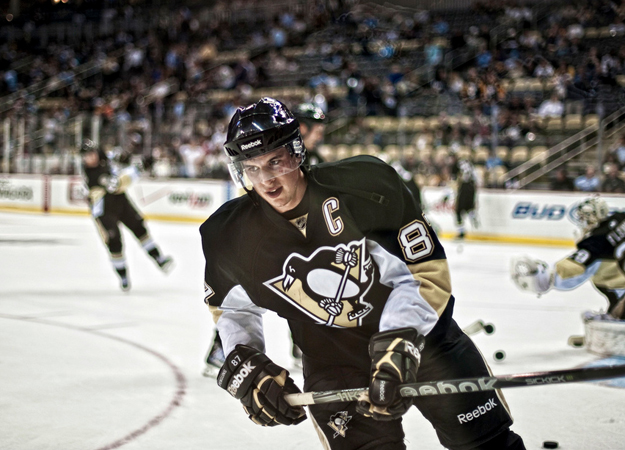 The Pittsburgh Penguins have won two hockey games in a row, which means that a small but perpetually CAPS-LOCKED segment of the media will allow some additional time for Sidney Crosby's brain to heal. For now.

Last week, after the Penguins dropped a hard-fought game to the Washington Capitals, the leader of this media sect’s shrill band (that band being Nickelback), radio personality/Real Live Internet Troll Mark Madden, took to Twitter and commenced his hardened routine of third grade shin-kicking.

Crosby has been a ghost since an errant and entirely accidental elbow from the Boston Bruins' David Krejci put the captain on the shelf with post-concussion symptoms in early December. The Penguins' six-game losing streak was a tipping point. Madden picked up on the palpable sense of unease and restlessness in the fanbase and set his sights on Crosby, a human person who is currently having trouble riding a stationary bike without feeling sick.

Unfortunately, in addition to being a human, Crosby is a professional hockey player who is paid nearly $9 million per season to perform feats of miracles that make us forget, for 120 minutes, about the backlog of horrible emails that await our attention. Madden knows how to build a proper fire. Money makes for great kindling.

"Sid's gotta decide whether the reward of playing for big money is worth the risk of going out there," Madden wrote to his 14,000 Twitter followers, a sentiment that he reiterated the next day on his radio program, where he rants when he's not DJing the life-soundtrack of Ed Hardy's target market. "Risk every player faces."

"When is a headache just a headache and not a symptom?" Madden wondered. "Don't doctors know better?"

There is an easy answer to that question, one which could be Googled in 10 seconds. A headache is a symptom when it's paired with sub-par scores on neurological tests, dizziness, double-vision, balance issues, slow reaction times, lethargy and a long list of other post-concussion hurdles. And yes, of course doctors know the difference. And yes, of course Crosby is exhibiting a combination of those symptoms, namely dizziness.

Madden went on to imply that Crosby may have been medically cleared by doctors, and that the majority of his teammates believe that he should be playing. Less than 24 hours later, general manager Ray Shero clarified that Crosby was not cleared to play, and the following day Crosby himself divulged he was cleared only for "light exertion" after his first public workout.

Called out by society’s more rational citizens in the aftermath of Wussygate, Madden took a page out of the Donald Trump public relations playbook. Like the Donald in the aftermath of the absurd Birther sideshow that gripped Ameriker, Madden maintained that he was merely "asking questions" and was proud that his misinformation campaign prompted the Penguins to break their silence about the injury.

In politics, sports and everything else, we’ve long lost the temerity to ask tough questions. Instead, we distract ourselves with firebrand bile. Madden can imagine that he’s playing Woodward and Bernstein, but in the end his bark merely pushed the Penguins to acknowledge what we’ve known all along: Crosby is not cleared. He is not scared. He is still suffering.

And of course he is. Of course there’s no conspiracy of silence. The truth is much less sexy and much more depressing: Crosby’s brain is starved for energy, and no amount of grit or money or courage is going to mend his neurons any faster.

It's almost too easy to vilify Madden and his Human Wet Willy persona. He's merely appealing to our own lesser angels. He's whispering—while shouting down callers—to a small part of our soul that we don't want to acknowledge at cocktail parties. Deep down, all of us want him to return too soon. We want him to light up our cold, bitter, horror-gray January weeknights.

But then there's this utter nonsense:

"What's being overlooked: The amount of hockey players who do come back from [a] concussion, accept risk, take precaution [and] play on," Madden tweeted.

This summer, when I chatted with Crosby’s physician, Micky Collins, he explained that athletes react to concussions in very different ways. Post-concussion syndrome can be more or less severe depending on a myriad of factors, including where the impact of a hit took place and how much the brain moved inside the skull, not to mention how fast the injury was identified. This is why it's so wrongheaded for the media to trot out the same tired comparisons of players' experiences with the injury, which vary wildly.

This is not an ACL tear. It's an injury to the most complex and unpredictable part of a human being—the motor that makes the entire body function.

There are four main ligaments in a human knee. There are billions of neurons in a human brain, more cells than there are stars in the sky. To imply that all players are on the same plane, and that most others have sacked up and played on with no serious long term consequences, is irresponsible.

Two-time All Star Marc Savard “accepted the risk,” returned to the ice after an on-and-off battle with concussions, and was forced to watch his Bruins win a Stanley Cup from his couch, where he will likely remain for the rest of his stolen career. In November, the 34-year-old showed the world a glimpse of the pain he continues to live with 11 months after suffering his last concussion when he tweeted, "Headaches are [a] normal part of life [now] but memory still the scariest thing … [Still] not able to workout.”

"Bad headaches tonight," he tweeted in December. "I hate this crap."

Madden's point that Crosby should be more forthcoming with information might be valid. But his insinuation that head trauma can be overcome with a few Excedrin and a couple ounces of ol' fashioned gumption is downright dumbfounding.

Keith Primeau knew this kind of backlash was coming. The 14-year NHL veteran was forced to retire at age 34 after sustaining a series of concussions. Now, at age 39, Primeau has a hard time skating around while coaching his sons’ youth hockey teams without becoming dizzy. He has since co-founded stopconcussions.com, a website that aims to raise awareness about baseline neurological testing and concussion management.

“For me and my quest, seeing Sidney do the right thing is special,” Primeau told The Tribune-Review. “The culture we’re brought up in with the hockey world just tells us to play through injuries. That may seem like courage, but it really isn’t .… People are looking up to his courage as we speak."

When Crosby came into the league at age 18, the Penguins were playing in front of thousands of empty orange seats and were half-way out the door to Kansas City. Seven years later, the waiting list for season tickets at the brand-new CONSOL Energy Center stands at over 4,200. Crosby has made the franchise millions upon millions of dollars more than his comparatively paltry $43 million contract. And yet Madden's insinuation, which is really just a reflection of our own hidden desires, is that Crosby owes the franchise and its fans something more.

We all have to ask ourselves how we want to be remembered. Not just today, when the microphones are hot, but when it's all over. Mark Madden has to ask himself this question when he’s all alone with his real self—not his WWF heel shtick. Crosby has to ask himself the same, when all the reporters are gone and it's just him and his bedroom ceiling.

How does Sidney Crosby the Man want to be remembered? Hockey moms are watching. Youth hockey players are watching. The pressure mounts with each passing day. The next hit, whenever it comes, might change Crosby's life forever, and with it, the game of hockey. Whether or not we want to admit it, there is so much more at stake than the 2012 NHL season. The ultimate irony is that it’s Crosby’s teammates—that ragtag M*A*S*H unit of the walking wounded and wide-eyed minor league replacements—who can do the most for their captain. Win, and the world is compassionate. Lose, and it grows restless.

Every night, Crosby probably stares at the ceiling of his bedroom and feels like it's closing in on him. Primeau knows the fear well. Despite all that he advocates, not to mention the pain he knows could be coming in five, 10, 20 years—the darkness that came to swallow up Derek Boogaard and Wade Belak and Bob Probert—Primeau admitted that he would have a hard time doing anything differently if given the chance to relive his career.

"That's the sad part for me, and that's why I know we're so far away," he said. "Because I don't think I would have changed much."

Those who are impatient or just plain indifferent enough to believe that Crosby should rush a return for the sake of a sports franchise, or a league, or worst of all, for their own entertainment, are truly the ones who are sick in the head.