The Pastime on the Fringe

At the home of the Butler BlueSox, fans turn up for the experience — but the players are hungry and hopeful. 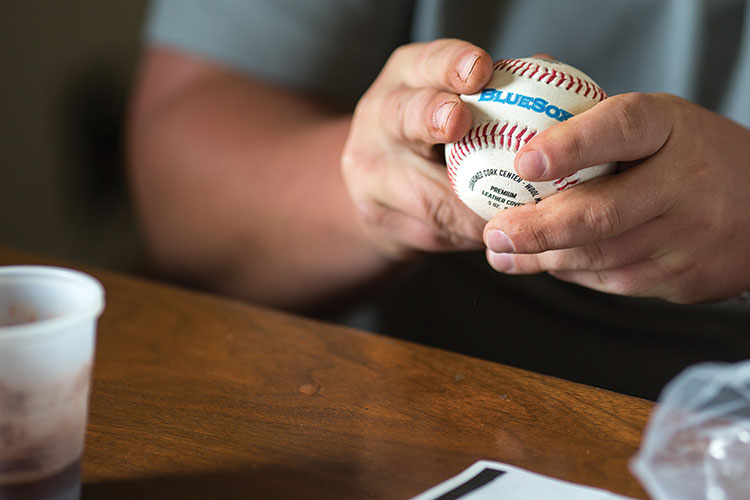 They’ll probably go through about five dozen baseballs. Maybe six dozen. Butler BlueSox Assistant Coach Josh Forbes picks up each one, rubs it with Mississippi mud — the good stuff, he says — to dull the shine, give them a better grip.

Then he drops each of them into a white, 5-gallon bucket next to his desk. 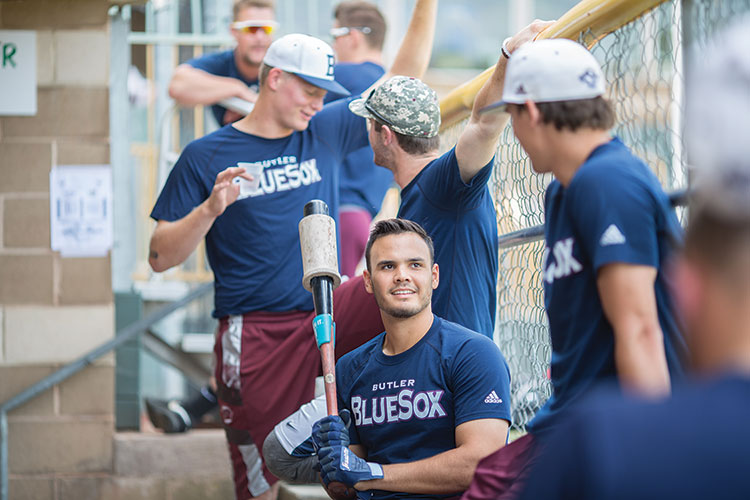 By 4:09 p.m., the team is in the dugout or sprawled out in plastic chairs or on the ground. Bonding. Talking about — well, stuff. Oh man, you remember that girl? Yeah, that one …
They love the game, playing in front of the crowd, signing autographs. Hate the traveling. Hate rolling home at 4 a.m. after playing the Kokomo Jackrabbits in Indiana. 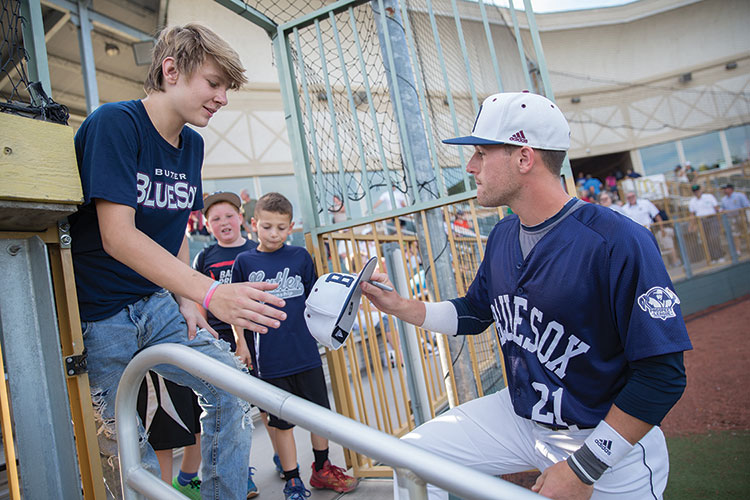 They’ll have walked by the white sandwich board at the front gate, where GM Patrick Reddick updated the standings for the Eastern and Western divisions with a red dry-erase marker.

They’ll make a pit stop at the concession stand for a chicken basket and a Miller Lite, grab the kids a bottle of Barq’s root beer and a 25-cent Tootsie Pop. Settle into bleachers, seats or one of six air-conditioned suites. A few wander up to the party decks, one of which is sponsored by Mr. Spiket (Home of the 5 Year Warranty) with the DuBrook Cement factory in plain view, on top of which a Butler BlueSox flag flies next to that of the United States. 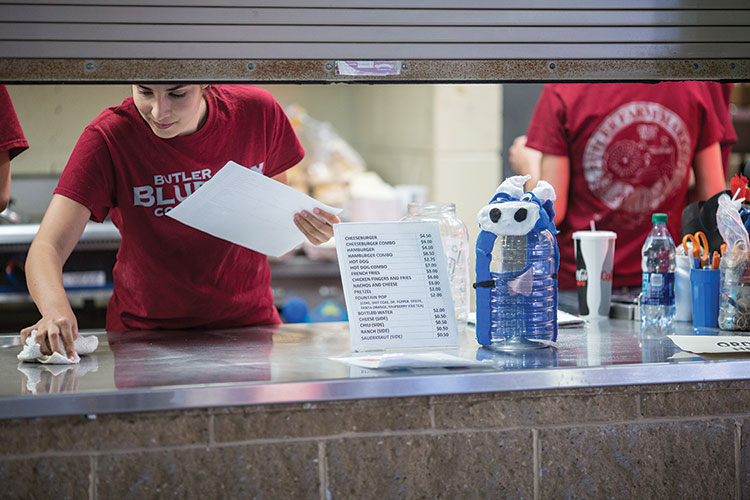 Announcer Jay Miranda’s voice booms. He transitions seamlessly into copy from the sponsor.

Those who are able are asked to rise to their feet. Men remove their hats, parents nudge their kids to place a hand over their hearts. It takes 50 people to hold onto an American flag that covers a quarter of the infield. When the players are announced, they’re escorted into position by kids with beaming grins, waving back to mom and dad, getting a fist bump from their hero on the field. 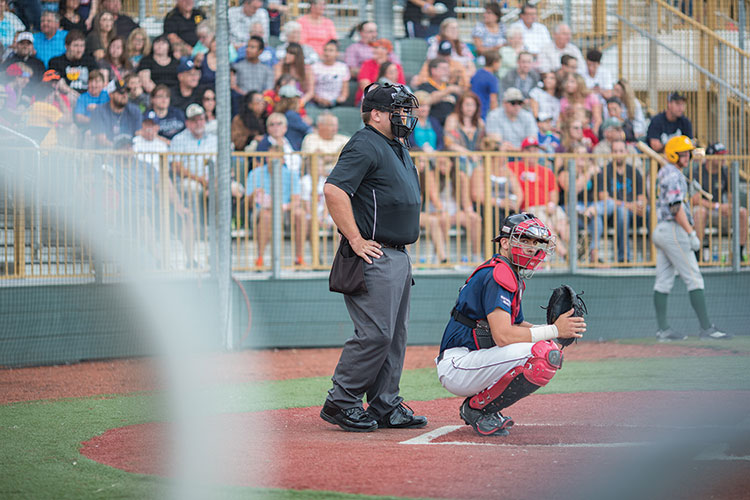 By the fourth inning, the Miners are getting stomped.

CRACK! An RBI double deep into left field, just shy of banners that blanket the outfield wall: Zippy’s Painting & Repair, UAW Local 3303, Butler Ambulance Service. The field itself is the only thing that remains from the old Pullman Field. In the 1930s and ’40s, this was home to the Butler Yankees, a farm team of New York’s infamous pinstripes. The stadium is gone (although the street signs outside, which still read “Pullman Field,” remain). But everyone says they still feel it. That something.

This inning break is brought to you by Nesbitt’s Landscaping, your stop for your next home improvement project. Nesbitt’s is known throughout the community for its fast turnaround time, not to mention competitive prices …

“Most people come for the experience,” Reddick says as Manny the Molar brushes off the bases in between innings. “Not necessarily for the baseball.”

Six local business partners control the purse strings. The BlueSox are one of 10 teams in the Prospect League, a developmental summer league that hands wooden bats to collegiate players from across North America. Most players are local: Aliquippa, Butler, Wexford, Pittsburgh. The out of towners, like the Floridians and Californians, spend the season shacked up with host families who welcome them in, treat them like sons and wave teary goodbyes when the regular season ends in August.

Ladies and gentlemen, don’t forget: all weekend, it’s the Wild, Wild Weekend Sale at the Team Souvenir Store. Buy one item at regular price and get the second for half off! 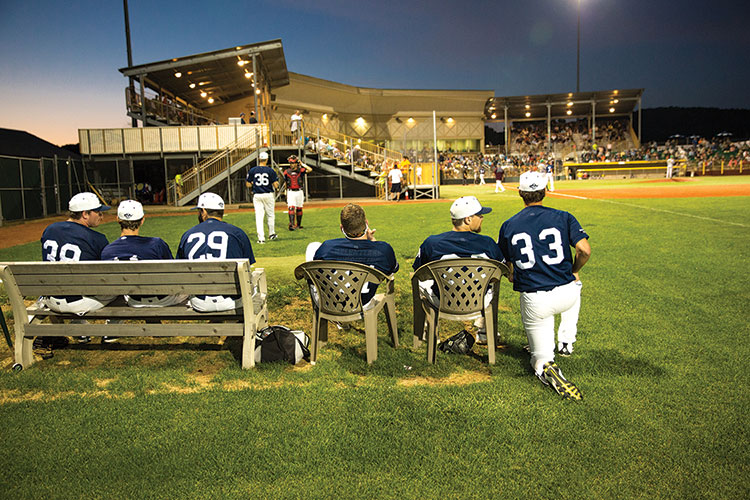 The team made their first trip to the Prospect League Champion Series last season. Got so close. But the Lafayette Aviators cinched it in Game Three. The BlueSox have never won a championship since their inception in 2006. If and when they do, everyone gets a ring and a really big trophy, or so they’ve been told. They aren’t playing for the money, because there is none. As per collegiate rules, no one gets paid for any of the 30 home games or the 30 on the road in places like Chillicothe, Ohio and Lafayette, Ind., during a regular season that will stretch from May 31 to Aug. 3.

“I’ve wanted to play here for years,” says centerfielder and leadoff hitter Stefan Mrkonja, a senior at Point Park University. “When I first got to college, you start to hear about collegiate summer leagues that players go to. This is a top league and a well-known one in the area. The BlueSox are close to home and just an ideal team for me to play on and try to get looked at.” 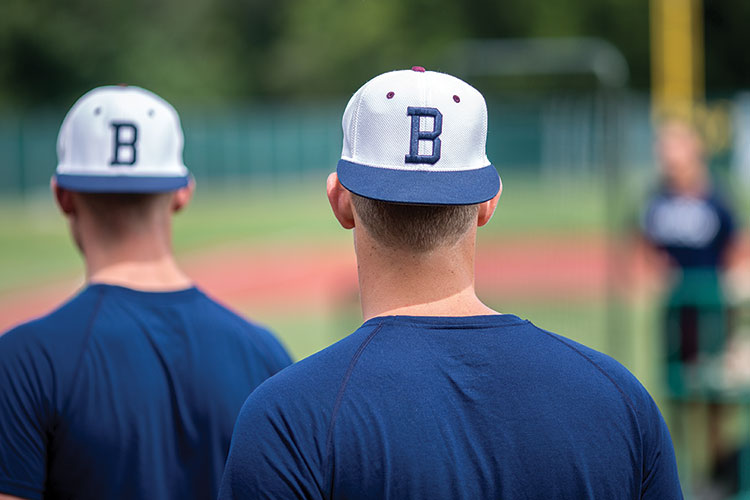 Because yeah, they love the game, the fans, the autographs. But they’re also playing because there’s that chance that their careers won’t end when they graduate. That someone will notice. Like when shortstop Jacke Healey got drafted by the Houston Astros following the 2009 season, or when the Chicago White Sox scooped up catcher/first baseman Kevan Smith in 2011, a year after he graced the BlueSox bench. You never know when a scout could be in the stands.

This article appears in the May 2018 issue of Pittsburgh Magazine.
Categories: Sports