We've got something for you (yes, you) to do this weekend, especially if you're a canine-loving '90s pop nostalgist with a thing for bocce. 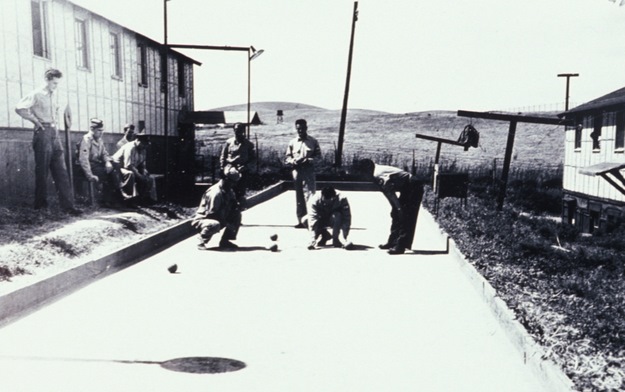 It’s hard catering to everyone. I mean, I try to be broad and make weekend recommendations that will please every ’Burgher, from the twenty-something checking her iPhone while weaving a fixed-gear bike through the alleys of Bloomfield to the Wexford power couple discussing the coming weekend over grapefruit and mimosas in the solarium.

Sometimes, though, it’s hard to keep things general. So this week, recommendations for preposterously specific sub-groups. And if none of these classifications apply to you, pick one at random. The late summer is a fine time to expand your horizons, before limiting them to the space between your couch and the television when the snow bedevils all of us.

For Sociable Bikers Who Prefer Urban Environs
If you’re a hog fan but the open road has proven just a bit too open for you as of late, just roll over the Smithfield Street Bridge and into Station Square. Every Thursday through September is Bike Night, when you and your ride are welcomed with open arms, discounts from Station Square businesses and a lineup of bands to keep your engine revving. Mosites Motorsports is also giving away a trio of Kawasakis at the end of the season.

For Dog Owners Craving Hearty Breakfasts
Regent Square is one of the most pet-friendly areas in the city, with a multitude of parks, walkable streets and pooch-friendly businesses. If you feel like taking your canine with you on a Sunday morning but still want a plate full of eggs and a killer cup of coffee, though, make the Square Cafe your destination. The food is great—try the perfect Square Breakfast ($9.00)—and, more importantly, they’ll be more than happy to let you park Fido next to your outdoor table. He’ll sniff his peers, you’ll chow down and everyone will go home happy. After the meal, save room for ice cream from Rose’s a few blocks down the street. In addition to human treats, they also sell doggie ice cream sandwiches.

For Bocce Enthusiasts With a Love of History
Few consider bocce a spectator sport. In truth, few consider bocce. Most of us just wait for someone to hand us a heavy ceramic ball, and then we throw it in the proper direction. Nevertheless, the history center is on its second annual Bocce Tournament and Festival, to be held in the lot across the street from the museum this Saturday. Those skeptical of the prospect of watching a yard-game tournament should be reassured; the event doubles as an Italian festival, with grub from the Common Plea and music from a number of Italian bands. Proceeds support the Sen. John Heinz History Center and watching the bumbling Buccos has quickly turned depressing, so why not become a bocce fanatic?

For Westmoreland County Ballet Aficionados
Greensburg ballet fans get a free show this Saturday night, as Pittsburgh Ballet Theater delivers a mixed repertoire performance under the stars in St. Clair Park. But what if you’re a more fervent devotee of the ballet, looking to expand your evening? Or, more likely, you’re just looking for a drink? The Westmoreland Museum of American Art has got you covered with a pre-show reception and dinner. $15 gets you a meal, drinks and parking at the museum. Mingle, sip and get ready for one of the most lovely evenings in Greensburg (or beyond) this summer.

For Unabashed ’90s Nostalgists With Money to Burn
Somehow, here, in 2011, Britney Spears is returning to the ‘Burgh. Yes, I know only one of Britney’s albums, the ubiquitous "…Baby One More Time," actually came out in the ’90s. But really, that’s Britney, isn’t it? Yes, everything else—from “Oops! I Did it Again” to the crazy period through the reclamation of the crazy period all the way to “I Wanna Go,” which I hate and has been in my head nonstop for about four months, all of that—it’s just a mad attempt to reclaim that first album, when she was an unironic teenager with a music video and an opening gig on the N’Sync tour. Ah, those innocent days. If you’d like to try to find a bit of that pre-millennial magic and have $39.70-$367.55 to blow, Britney will be at the CONSOL Energy Center this Friday.