The Original Score from “Jaws” on Vinyl? Yeah, We Got That

Vinyl Remains in Dormont is not interested in offering an endless variety of records, but what you will discover are rarities, classics and hard-to-find curiosities. 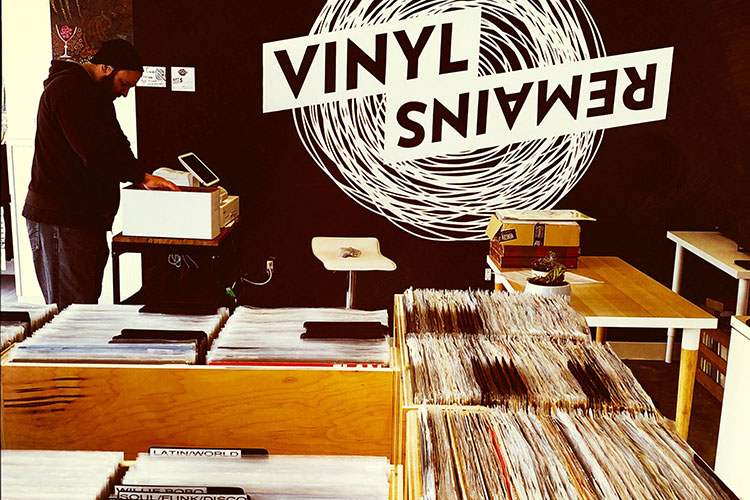 You won’t find brand-new copies of contemporary hit albums at Vinyl Remains in Dormont; if you want Kendrick Lamar and Taylor Swift, vinyl copies of their hit 2017 albums can be found at Target and Barnes & Noble.

Nor will you encounter a dozen well-worn copies of the Eagles’ greatest hits for a buck apiece. You will, however, find rarities, classics and hard-to-find curiosities.

On one recent visit, a sealed copy of the original score from “Jaws” shared wall space with a 50-year-old pressing of surf rock legend Dick Dale’s “Checkered Flag.” Near those two discs sat a 1987 album of songs by “Nightmare on Elm Street” villain Freddy Krueger. (Not the actor — Freddy, in-character.)

“This is a curated little bit of everything,” he says. “I go through stuff fast and I replenish it as soon as I can.”

Anderson relocated from New York in 2017; in the 1990s, he ran a record store in the East Village before opening bars and restaurants in Brooklyn. After decades — and having children — the charm of New York had run out, Greg says. “Everything was getting more expensive … a lot of my friends and a lot of people in general just kinda seemed miserable. It changed really fast.”

On a trip to see friends in Pittsburgh, he and his family quickly made up their minds to move here. Once settled, Anderson says, “I had no choice for my mental health but to open another record store.”

This article appears in the February 2018 issue of Pittsburgh Magazine.
Categories: Arts & Entertainment, From the Magazine