The Old Ballgame Lives On at CONSOL Energy Park

Feeling overwhelmed by the Pirates’ success? Catch a Washington Wild Things game for a dose of baseball in its purest form. 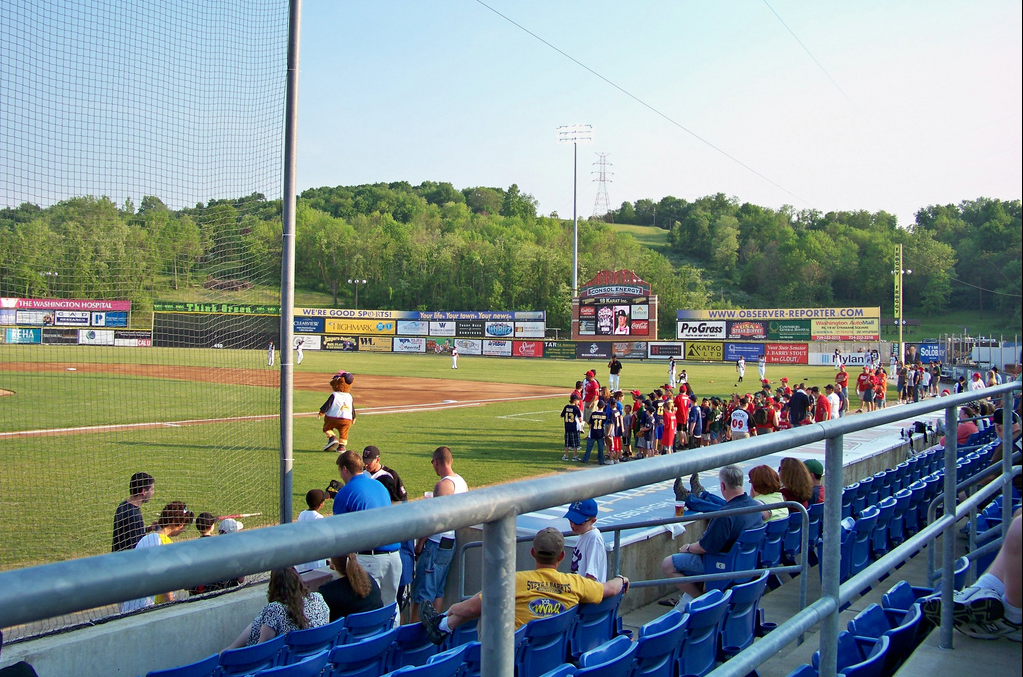 I’m not convinced there was ever a time when Pirates tickets were more in demand than they are today. It’s a big claim, but I think I might be right.

Obviously, interest has never been this high in the PNC Park era. Three Rivers Stadium had so many seats — it could be expanded to nearly 60,000 — that even when the team was a division leader, tickets were usually available. Maybe there were periods when Forbes Field was a tough place to find a seat (the capacity changed but was often lower than PNC Park). But that was before the ticket-price inflation of the last half-century. No $8 beers at Forbes Field. (No beers at all, in fact.)

Regardless, Pirates fans who made a habit of heading to the ballpark during the last 20 losing seasons are experiencing a sharp change. Going to a Pirates game used to mean wandering up to the ticket booth about 10 minutes before the first pitch, dropping $5-9 on a general admission seat and scoping out which sections you could sneak into without anyone noticing. Today … not so much.

Don’t get me wrong: it’s one of them good problems (to quote “The Wire”). I’ve dreamed of this set of circumstances for decades. But part of me misses that easy and open access to Major League Baseball, even if the best I could hope for with my ticket was that Jason Bay would break his slump and Xavier Nady would notch a few RBIs before Paul Maholm imploded in the fifth.

So if you can’t score Pirates tickets — or you’re just nostalgic for nearly free baseball — let your Bucco fever spill over to the South. This week was my first trip to see the Washington Wild Things at CONSOL Energy Park (which is at least the second or third name that ballpark has had, by the way), so I can testify: It is the quintessential minor-league experience in all its hokey, charming glory.

The Wild Things play in the Frontier League — truthfully one of the last outposts of professional baseball. Frontier League teams have no affiliation with big-league clubs and aren’t even tied to Major League Baseball; this is an independent league, meant primarily for undrafted young players or free agents trying to catch the attention of an organization. The 20-year-old league, which includes teams from as far afield as Illinois and Missouri, has sent at least two dozen players to the show and many more to the minors proper. Former Wild Things pitcher Vidal Nuño turned up in the Yankees bullpen for a stretch this year.

The park itself is lovely — an intimate stadium nestled against a hillside. With a capacity of only 3,200, there isn’t a seat in the house that’s more than 20 yards from the action, all with great sightlines. The neighboring highway is a distraction, but you get used to it after an inning or so. Spring for a $12-15 ticket and you’ll get a seat in the first few rows; five or 10 bucks puts you in the bleachers. All the seats are between first base and third; there’s no outfield seating.

Part of the charm at any minor league stadium is the overwhelming, ceaseless presence of promotions, tie-ins and sponsorships. To draw you to the park, the Wild Things host theme nights, giveaways, wrestling cards, parties and more. They also manage to celebrate nonsummer holidays throughout their season, with Christmas in July and celebrations for Halloween, Thanksgiving and even New Year’s Eve occurring in August. Now that’s dedication.

It goes so much further than that, though. Every inning pause has an event, from dancing on the dugouts to a milk-and-cookies break. Every conceivable on-field action has a sponsor. Start of the sixth inning? That’s brought to you by a six-pack shop. Foul ball over the bleachers? A wacky shattering noise will accompany an ad from an auto-glass company.

And when opposing batter Brian Bistagne of the Rockford Aviators sauntered up to the plate, the P.A. guy announced that if Bistagne struck out, everyone got a free Big Mac. Despite the crowd’s entreaties that he deliberately whiff in the name of free food, he walked. (By rights, that probably means we owe him a Big Mac.)

This might sound overwhelming, but it’s actually amusing and borderline charming. Lest you think it’s a corruption of the game, rest assured that endless tie-ins are a proud minor league tradition.

The Wild Things are also patently aware that baseball fans at every level are generally a hungry bunch, and they are happy to oblige. Food prices are a bit cheaper than at a big-league park. You can find a sandwich off the grill for $6. A Wild Dog-fries-soda combo will run you $10. Large domestic drafts are $6, and there are even a few premium beers on tap (Stella Artois and Leinenkugel’s Summer Shandy were available) for $8. Love dessert? Of course you love dessert. Deep-fried oreos! Funnel cakes! Frozen bananas! Enough ice cream to keep every Washington County youth running around madly until the ninth inning!

As for the game itself — nominally what we’re here to see — it looks more like college ball than the big-league product. But when Washington center fielder Darian Sandford crashed into the wall to make a running, over-the-shoulder catch, it was just as thrilling as it would be in any stadium.

That, after all, is the charm of baseball, and a big part of the reason why it succeeds at every level: When bat hits ball, we all forget where we are and what we’re doing and follow it into the clouds. Whether on the banks of the Allegheny or off of a Washington, Pa., highway, that part never loses its magic.

This article appears in the July 2013 issue of After Dark.
Categories: After Dark