The (Official) Birth of Pittsburgh

As the city begins to celebrate the 200th anniversary of its incorporation, Rick Sebak discovers what exactly we’re commemorating. 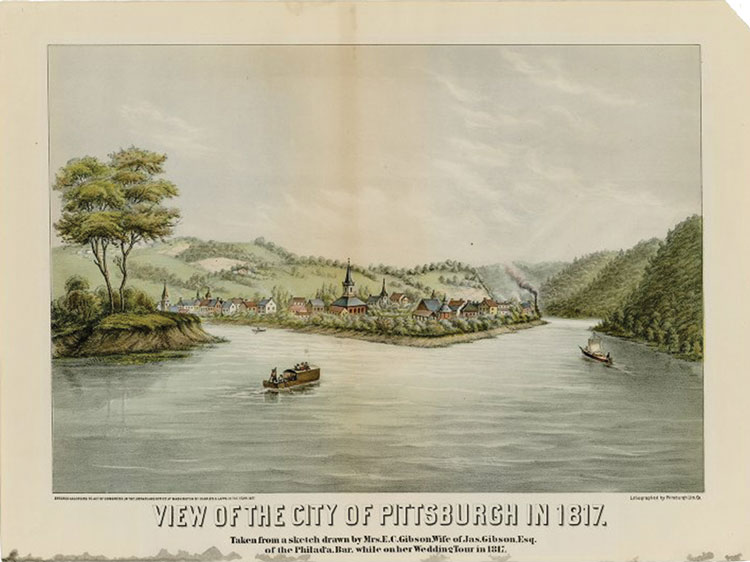 photo courtesy of the library of congress

You remember 1816. That was the year we got those newfangled street lamps Downtown. The first ones we ever had! The whale-oil ones. It was just 200 years ago; how could you forget?

Yes, that also was the year that Pittsburgh got permission from the state legislature to incorporate as a city. Oh, we had been here under the name “Pittsburgh” since 1758, and we’d been a borough since 1794, but in 1816, someone apparently got to the necessary paperwork. On March 18, 1816, we officially were allowed to call this town a “city,” with a mayor (instead of a chief burgess), two councils, 12 aldermen and a recorder.

In July of 1816, Ebenezer Denny — a Revolutionary War veteran — started a short, five-month stint as our first mayor.

Our population was somewhere between 5,000 and 6,000 people (about the size of Coraopolis today) but we already had a reputation as a smoky city — a coal-mining, ship-building, iron-manufacturing, glass-producing city out here on the wild western side of the Allegheny Mountains. Still, it was important to have the necessary documents to prove our “city” status.

Now in 2016, we’re going to celebrate the anniversary of that bureaucratic moment of becoming an official city with a year of festivities, a parade and some bicentennial-branded events and parties. The city is calling it “Pittsburgh Bicentennial,” and there’s a website (pgh200.com) with a press-conference video, a list of partnering organizations and some history. Maybe the best, self-deprecating bit of historic information is this note: “The incorporation wasn’t exactly front-page news. In fact, the Pittsburgh Gazette reported the passage of the law on page three of its March 23rd edition with a brief one-sentence description, just above a report about a new horse market in town.”

But why worry? Any anniversary is a good excuse for a party!

And the first party will be March 18, which has been given the name “Incorporation Day.” (Because nothing gets the juices flowing and the blood racing like a legal registration!) “City Day” or “Pgh200 Day” might have been better. After all, we were incorporated as a borough in 1794, and nobody celebrated the 200th anniversary of that bit of governmental red tape in 1994.

We did celebrate Pittsburgh 250 in 2008, two-and-a-half centuries after Gen. John Forbes named this place “Pittsburgh,” making us an important-sounding British destination even before they started to build Fort Pitt.

Mayor Bill Peduto has made it clear that the bicentennial year is really a recognition of all of the history (and mayors) that have happened since we became a city. Folks in his office have been searching for descendants of all of our mayors since Denny, and their family members will be coming to town for a parade in early July. Any effort that includes a grand parade should be encouraged.

And there may be surprises. Who knows what other significant events and anniversaries may be included? A year that celebrates history can inspire us all to look around and pay attention to what happened when, where and how. (And for much more when, where and how, see our “12 Days that Changed Pittsburgh” feature)

For instance: How many bridges did we have over our three rivers when we became a city in 1816? None. We didn’t start to become the City of Bridges until we built our first, the Monongahela Bridge, at the site of the modern-day Smithfield Street Bridge, in 1818. And a bridge between Downtown and the North Side (then Allegheny City) didn’t exist until 1819, when the first span between Sixth Street and Federal Street was completed. Those anniversaries are coming soon. More reasons to celebrate and party and parade!

This article appears in the March 2016 issue of Pittsburgh Magazine.
Categories: Rick Sebak