Frankly speaking, there's half a century of hot-dog history located at the corner of Forbes Avenue and Bouquet Street in Oakland.

I love the "O." Call it what you will: the Original, Essie’s, the Dirty O or the Hot Dog Shop. It’s been serving great dogs since June of 1960. It’s one of those places where you want to take visitors just to let them know that Pittsburgh has soul, wonderful wieners, a certain tasty funkiness and truly great french fries.

The Original was started by two brothers, Sid and Moe Simon, who have roots in the Hill District. Moe remembers the weather was really hot when they first opened their doors that summer. 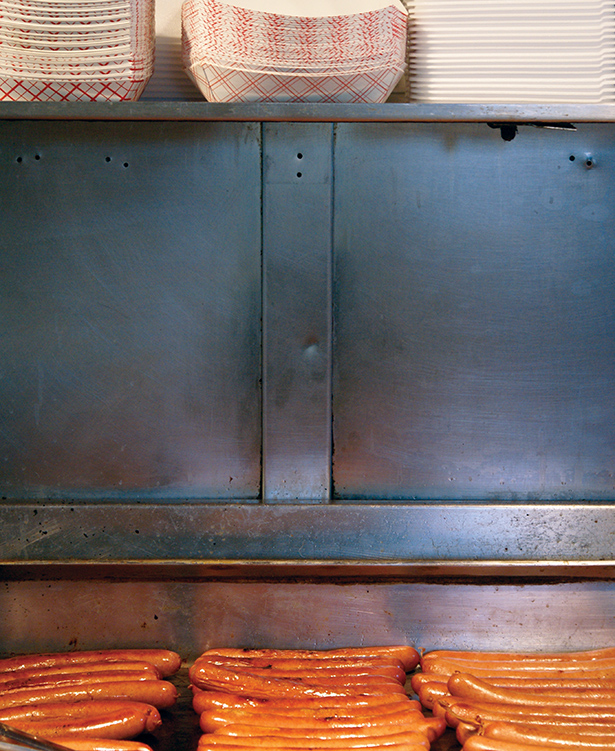 They called the new place Original Burgers & Hot Dogs, but they had no burgers. That makes me laugh. Oh, the burgers eventually arrived about three weeks later, but by then, it was obvious what was important, and Moe thinks they decided to change the name to the Original Hot Dog Shop by September.

So they were up and running and busy by the time the Pirates won the 1960 World Series over the Yankees at Forbes Field—just a block away.

Now, as they celebrate a half-century of selling superb sausages in buns, Moe is retired, Sid passed away in November 2008 and Sid’s daughter, Terry Campsano, and son, Bruce Simon, are co-owners of the place. Terry sat and talked recently, sharing some old pictures and laughing about her early years at the O (starting when she was 13). "I love that picture of my dad with the hot dogs lined up his arm," she says. "He used to do that. I still miss him every day."

An old newspaper ad says the O only sold "Armour U.S. Gov’t. Inspected Franks," but for many years, it has sold primarily natural-casing wieners made with the family’s own special recipe by Silver Star Meats in McKees Rocks.

And everybody knows the fries here are just as outstanding as the dogs. They’re carefully cooked twice in peanut oil: first at a lower temperature, then rested until they’re ordered and finally receiving a second frying in hotter oil to get a perfect crunch. The serving size is legendary—gigantic mounds of fries. Uncle Moe says the fries weren’t here in 1960, but they were inspired by great french fries in paper cups at the beach one year.

Now, you get the fries (and I suggest drinks as well) at the back counter and the dogs up front by the Forbes Avenue entrance. It’s an unusual procedure that baffles first-timers, but I’ve come to believe that an odd way of ordering often indicates some really good food.

It’s a rare hot dog place that lasts a half century. We can chalk it up to one family’s hard work, to quality hot dogs, fabulous fries, weird ways of ordering and the endless crowds of loyal customers among other factors. Although Forbes Field is gone, the Oakland landscape has changed and the Pirates won’t be in the World Series this year, the O is still a player, a destination and a beloved part of our city.

Moe and Sid Simon and their descendants deserve to be honored for their major home run of a small business, too.

Rick Sebak is a producer for WQED-TV and made "A Hot Dog Program" for PBS in 1999.

This article appears in the September 2010 issue of Pittsburgh Magazine.
Categories: From the Magazine, Rick Sebak