The NFL is Running a Billion-Dollar Con

The welfare kings of the NFL are laughing all the way to the bank, and you’re not in on the joke. 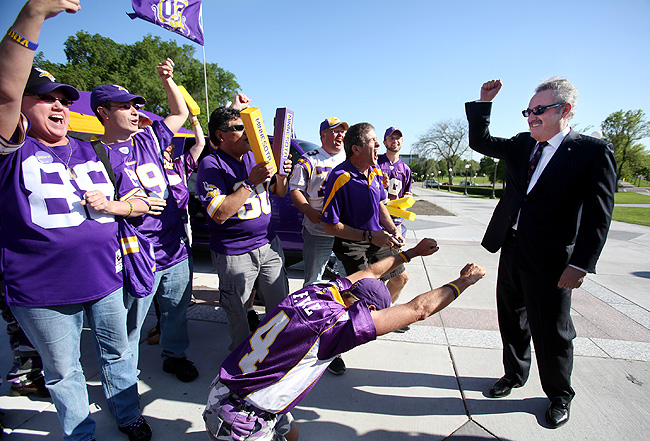 Chances are good that you or someone you know recently purchased groceries, talked to a mechanic or opened a medical bill and felt a pang of existential dread so visceral that it triggered a physical sickness.

This is what it means to be alive in America in 2013. To work hard, always do the right thing and still commute home at the end of the day under a charcoal cloud of professional uncertainty, political harakiri and increasingly unfathomable “service fees” visa-vis your monthly cable bill.

Yet the incomprehensibly rich NFL team owners are busy crafting a neat little narrative for you, the fan: They need more of your tax dollars to build their lavish stadiums.

Not that you haven’t already been generous. Since 1923, 186 professional sports stadiums have been built at a cost of $53 billion. Taxpayers have chipped in to the tune of $32 billion — 61 percent of the total.

You can watch an animated graphic showing the trend of public extortion at Deadspin if you’re in the mood for masochism. Of all the major sports, stadiums in the NFL have received the largest percentage of taxpayer funding at 68 percent. Still, the autocratic welfare kings behind football have decided that they need more. Latest in line: the Minnesota Vikings.

Vikings owner and real estate mogul Zygi Wilf is a crook and a fraud, at least in the eyes of the court of New Jersey. A judge in a civil suit filed against Wilf clan recently concluded that the family had spent years systematically defrauding its business partners out of millions of dollars.

The extent of the Wilfs’ racketeering was so flagrant and well-documented that Judge Deanne Wilson described the operations as akin to organized crime.

“I do not believe I have seen one single financial statement that is true and accurate,” Wilson said, referring to the mountain of financial records sitting in the courtroom.

The Wilfs were ordered to pay $84.5 million to their former partners. Zigi, leader of the Wilf clan, will have to pay 60 percent of the damages.

“The bad faith and evil motive were demonstrated in the testimony of Zygi Wilf himself,” Wilson said.

Now this mustachioed weevil, whose net worth has been estimated at more than $1 billion, is waving his Hoover flags to the people of Minnesota to help foot the bill for his legal troubles.

Last year, after holding the Vikings fans hostage by threatening to relocate the team if he didn’t secure public funding for a new $1 billion stadium, Wilf persuaded lawmakers to cave on a subsidy package worth nearly $500 million in public financing.

The state of Minnesota is on the hook for $348 million, while the city of Minneapolis kick in $150 million via the highest downtown sales tax in the country (hope you like $9 Coors Lights). This comes at a time when more than half of Minneapolis public schools are facing budget cuts. 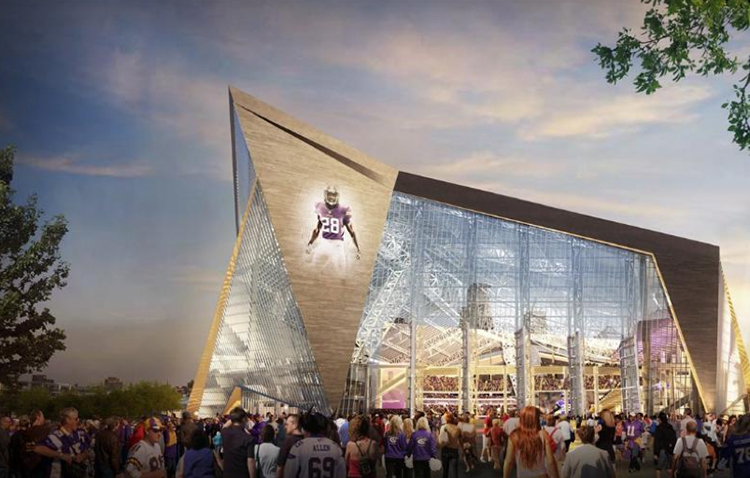 How could this happen?

As do most mafioso extortions, Wilf’s threat came in the form of a wink. As public debate raged about whether or not taxpayers should chip in for a new stadium, the NFL coyly scheduled the Vikings to play a regular season game against the Steelers in London while simultaneously leaking statements to the media that they would love to see an NFL franchise across the pond.

With the NFL’s collusion, Wilf made Minnesotans an offer they couldn’t refuse.

Minnesota governor Mark Dayton, who ran on a platform of raising taxes on the mega-rich, was the deal’s lead cheerleader. Dayton even began referring to the project as “The People’s Stadium,” a bit of nauseating political rhetoric so bleakly ironic that it seems to have been lifted from the Dr. Strangelove script.

The rhetoric was all part of the big lie, the one told so many times and with such bald-faced conviction that it seemed irrefutable: stadium projects lead to economic revitalization.

The most comprehensive study done on the economic implications of sports stadiums found that they do little to bolster local economies. In some cases, local economies actually shrank. In a 30-year study of 37 metropolitan areas with pro sports franchises, sports economists found that the real per capita income of city residents decreased on average after the construction of a new stadium.

In 2011, The Wall Street Journal revealed that Hamilton County, Ohio, was still devoting 16 percent of its annual budget to pay off the public financing of the Cincinnati Bengals’ Paul Brown Stadium a full 10 years after it had been built.

A Harvard University study estimated that the long-term public cost of the Bengals’ stadium would top $550 million.

Residents of Minnesota will be thoroughly bummed to learn that the Bengals’ stadium has effectively bankrupted Hamilton County, which is now slashing public services and laying off police to make up for a $20 million budget deficit.

Minnesotans will also be very bummed to know that Wilf came back to them with his palms extended to the heavens once again last week.

Their $500 million simply was not enough to cover construction costs, according to Vikings Vice President Lester Bagley. Bells and whistles would have to be cut. Strangely, executive suites were not on the chopping block. But a 400-car parking garage for fans simply could not possibly fit into the measly $1 billion budget.

After all, where would the Vikings ownership ever find the money to cover such extravagances?

Perhaps under the couch cushions?

Literally the instant the deal was struck for the new stadium — without drafting any players or improving the Vikings’ win total or even putting a shovel in the ground — Wilf and his cronies had made themselves hundreds of millions.

Forbes estimates that the stadium deal raised the value of the Vikings franchise to a whopping $975 million — a league-high 22 percent increase in one year. 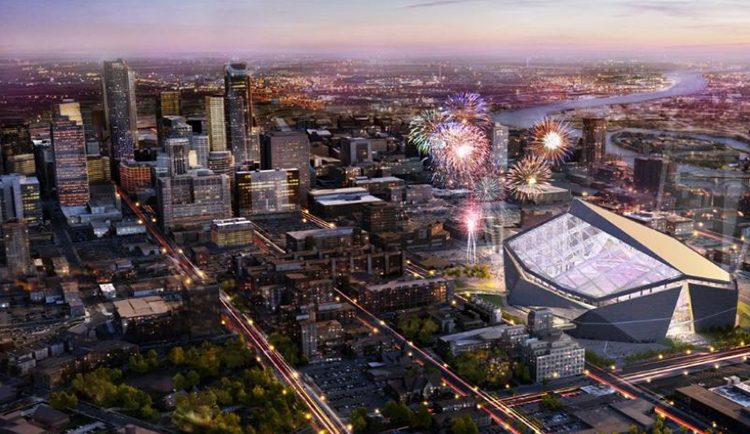 Wilf’s ownership group purchased the team for $600 million in 2005. They could sell the franchise tomorrow and make a $375 million profit, not counting the average $200 million in revenue that each NFL team makes per season.

Public extortion is good for business.

If you are a normal small-business owner, expanding your operations would entail taking on sickening amounts of esoteric paperwork, bank loans saddled with extortionate interest rates and a large dose of personal financial risk.

In the NFL’s pseudo-socialist wonderland, risk does not exist.

During the league’s smear campaign against its own retired players — the very humans whose sacrifice grew the league into a $9 billion-per-year industry and made owners untold fortunes — NFL brass repeated a brutal kone: You knew the risk. This mantra has been co-opted by the comment-section ragebots who have been manipulated to think that the media is trying to outfit quarterbacks in dresses and other numbnut auto-responses.

See, risk is only part of the deal when you are a player. When you are a crippled husk of a man who suffered league-sponsored, scientifically approved brain trauma, them’s just the breaks.

But if you are a member of the NFL’s exclusive oligarchy, there is no risk. You are buffered from free-market capitalism by a cushy nest of taxpayer dollars. The nest has a mini bar, catered foie gras and a designated stooge to clean your eyeglasses for you. 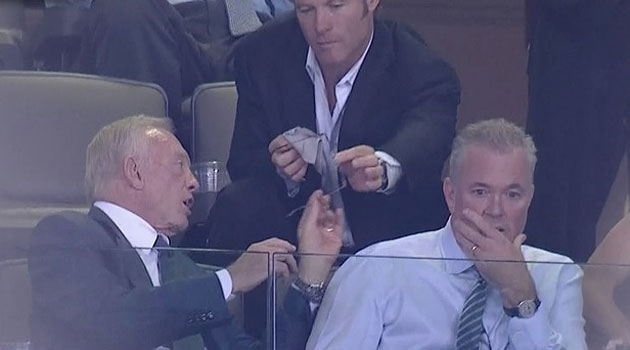 To sweeten the deal further for Wilf, the NFL gave the Vikings a $50 million no-strings-attached grant to help finance their stadium — the exact amount that the NFL committed to funding concussion research with General Electric and Under Armour throughout the next four years.

This arithmetic should be mind-boggling on its own. Toss in the fact that the NFL enjoys nonprofit status in the eyes of the U.S. government, and it seems almost like money laundering.

It’s all a grand joke, and you are certainly not in on it. As Gov. Dayton inked the bill that would ransom $500 million in taxpayer money to finance Wilf’s gaudy new megamansion, a crowd of supporters wearing Vikings jerseys and purple hardhats erupted in cheer. One of the supporters on hand, the owner of a carpet-cleaning business from Coon Rapids, beamed to a reporter, “Some of [our critics] refer to us fans as idiots, but most of us have jobs.”

Somehow, a bipartisan coalition of hucksters and thieves had convinced a working class man to feel warm and fuzzy about using his tax money to help a billionaire build a gaudy monument to his own ego. They did this by painting critics of the deal, who had the audacity to suggest that $500 million of their money might be better spent on social services or education, as the lazy poor.

That man, a season-ticket holder, found out earlier this month that he will be forced to pay between $500 to $10,000 for a “personal seat license,” a completely imaginary fee made up out of thin air by NFL owners, that will line the pockets of Wilf’s ownership group with a cool $100 million.

Hey, what do you know? Enough money to pay for a racketeering trial. Apparently not enough for a parking lot.

How fitting that the lasting image of the Vikings’ soon-to-be-bulldozed stadium, the Metrodome, will be its roof collapsing under the weight of a blizzard. A perfect metaphor.

The people of Minnesota have been truly and utterly snowed.