Ring in the New Year while staying away from Carson Street. Plus, a sports weekend at Rivers Casino and Murphy's Tap Room. 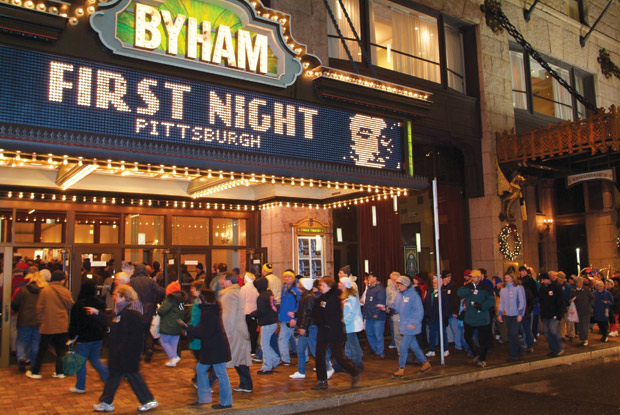 There’s a term that applies quite neatly to all of your major drinking holidays. New Year’s Eve, St. Patrick’s Day, Halloween, Super Bowl Sunday … at the bars, each can safely be called “amateur night.”

Take a gander at, say, Carson Street. See all those people there, looking festive? Clogging every bar out the door, spilling out on to the streets, getting into scuffles over a perceived slight from one of their many bros? Yeah. Where were they last Saturday? Or last Wednesday, for that matter? Not out. Because they’re probably about 21 and three months, and have yet to figure out that it’s much more enjoyable to have a night on the town when the whole place doesn’t resemble a soccer riot. These are your drinking amateurs, and New Year’s Eve is one of their big days.

So I’m going to recommend that you keep it a bit more calm on New Year’s Eve and take in some of the First Night festivities. This is Pittsburgh; we’ve got another 364 days each year to throw back a few on the South Side.

The First Night Pittsburgh festival has grown from a futile civic attempt to keep you sober to an impressive, nearly unending list of events for grown-ups, families, art lovers, music lovers … hell, everyone.

Take your kids for fireworks, a cartooning demonstration at Toonseum, a magic workshop at Fifth Avenue Place and—most importantly—a meeting with a live African penguin, courtesy of the National Aviary, at 100 Seventh Ave.

Your options really open up without the kiddies, though. Gab Bonesso, one of my best friends and frequent stand-up collaborators, is doing four sets at Bricolage Theater, starting every hour from 7-10 p.m. She’s been selected as the Best Comic in Town by both PM and the City Paper, so familiarize yourself. The fabulous (and quickly growing) Pittsburgh Playwrights Theater is bringing back Charmaine Page’s The Powder Room, a hit during their Theater Festival in Black and White in September, for three shows. And WYEP has a dedicated stage for their favorite local acts.

Bundle up, get downtown, and remember: If you are desperate, there are bars in the Cultural District, too. (First Night Pittsburgh Events, Friday, 6 p.m.-midnight, downtown. First Night Access Buttons, $8. Info: 412-456-6666, firstnightpgh.org)

SATURDAY: HOVER AROUND THE WINTER CLASSIC, MOSTLY AT RIVERS CASINO

Hopefully you have tickets for the Penguins snow-capped tilt with the Washington Capitals on Saturday, but even if you don’t, there are plenty of reasons to hang around the North Shore. Earlier in the day is the alumni game, featuring Mario himself alongside the likes of Paul Coffey and Bill Guerin, the tailgating promises to be epic and there’s free outdoor skating nearby.

As I’ve learned through early excursions to Stage AE, the recipe for a lovely night on the North Shore now begins and ends at Rivers Casino.

If you’ve been following the print side for the past year, you know I mention how great Rivers is with some regularity, but for anything on the North Shore, it’s a must. Roll in, park for free, enjoy food, a few drinks and a few hands of blackjack, and make the short walk over to your destination. At the end of the night, cool down with a glass of wine or a cocktail. Food, drinks, gambling and free parking. Plus, it’s open 24 hours. Your pre-game plans for the rest of eternity just went out the window. (Rivers Casino, 777 Casino Drive, North Side. Info: 412-231-7777, theriverscasino.com)

Sometimes, you just need a smokey dive. And with the Steelers once again playoff-bound (and likely to get a first-round bye), every bar in town will hereafter be packed to the gills.

Which makes this the ideal opportunity to enjoy a Steelers game in the truest Pittsburgh setting. In a comment left on this site after my 20 Hot Bars piece was posted, a dyed-in-the-wool ‘Burgher bemoaned my focus on hipper joints, extolling the virtues of the shot-n-beer places that make Pittsburgh what it is. While I prefer variety in my nightlife, the (somewhat abrasive) gentleman had a point—there’s something about more working-class bars that’s just undeniably Pittsburgh.

Murphy’s Tap Room in Regent Square is the right kind of place for folks of that mindset. Chatting with the bar staff feels like you’re hanging out with a neighbor, the beer list is strong enough to hang in the Square and they’ll give you some nachos and cheese for a dollar. Before every Steeler game turns Pittsburgh into a state of emergency, relax with a couple of Iron Citys at Murphy’s for this one. (Murphy’s Tap Room, 1106 S Braddock Ave., Regent Square. Info: 412/241-9462, murphystaproom.com)