‘The Most Exciting Sporting Event in the Country’

“March Madness” is as cruel as it is compelling. Just ask Robert Morris Head Coach Andy Toole, who has been there and hoping to go back again. 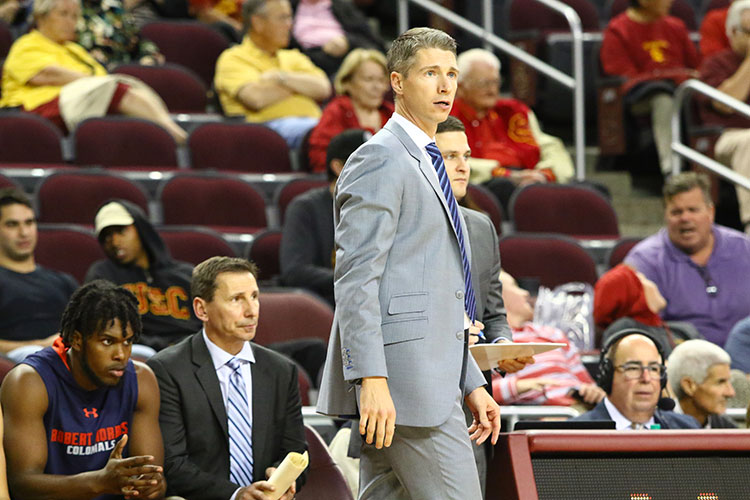 It took a desperate drive to the paint and a contested layup Matty McConnell pretty much willed into the basket in the closing seconds.

It took a subsequent block by Malik Petteway of what a heartbeat before had appeared to be an uncontested layup at the other end just before the second-half buzzer.

And before that, there had been this:

It took all of that and a whole lot more just to get Robert Morris out of a 15-point, second-half hole and into overtime in the quarterfinals of the Northeast Conference Tournament on Wednesday night.

“I told them, ‘this is fun,’” Colonials head coach Andy Toole reported, when asked what he had said to his players between the end of regulation and the start of OT. “‘This is what you do all the work for.’”

Such moments amid such circumstances mean everything in college basketball, particularly at schools such as Robert Morris, whose only shot at the Promised Land of the NCAA Tournament is to win a conference tournament. 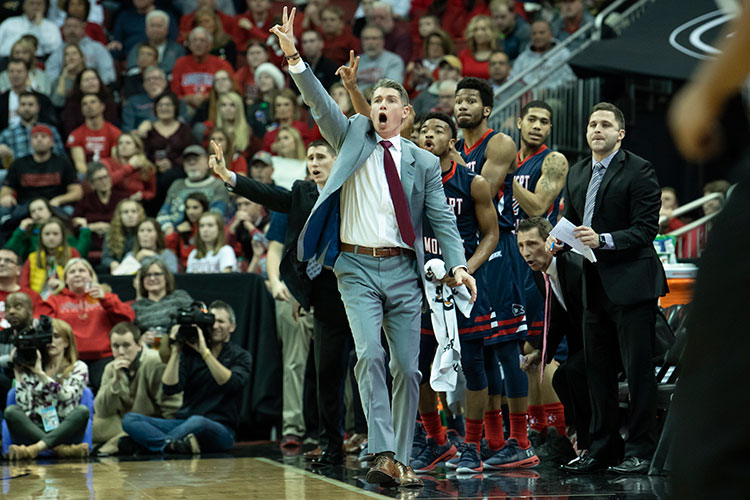 Robert Morris did both against St. Francis Brooklyn, surviving the Terriers thanks in part to a pair of McConnell free throws that added to a one-point lead with 10.4 seconds left in overtime and advancing to Saturday’s semifinal at Fairleigh Dickinson.

“Fran Dunphy, who I played for in college (at Penn), he always used to there’s no greater feeling than hearing your name called on Selection Sunday,” Toole offered a day before the Colonials’ 69-65 overtime triumph in the quarterfinals. “We relay that to these guys, as well, because it’s true.

“When you see your name go up on that bracket on Selection Sunday, there’s a sense of pride and accomplishment that most of us have never felt. You become a select group of people that have been able to say they’re a part of ‘March Madness,’ which is probably the most exciting sporting event in the country.”

Selection Sunday is a week from this Sunday.

The desire to be recognized then is undeniably why McConnell, Petteway, Williams and thousands of players like them across the country have done what they did all season.

But there’s also a steep price to pay, potentially and often inevitably, for dreaming the dream.

That’s what often makes “March Madness” as cruel as it is compelling.

“March is the cruelest month of the year,” Toole insisted. “You can either have dreams accomplished or you can get your heart ripped out of your chest, that’s the great thing about March. It’s also the brutality of March.

“March can be a cruel, cruel month.”​

Toole’s counterpart at St. Francis Brooklyn, Glenn Braica, wound up on the wrong side of the survive-and-advance dynamic on Wednesday night.

There’s no other kind in March.​

Toole’s been there, too.

He was an assistant in 2010 when No. 15 seed RMU survived the NEC postseason, realized its NCAA Tournament dream and drew No. 2 seed Villanova, in Providence, R.I.

It was supposed to be a blowout.

It almost became one of those upsets the likes of which have come to define ”March Madness” as much if not more than Duke, North Carolina, Kentucky or some other college basketball blue blood eventually cutting down the nets.

The upstart Colonials led at halftime, 28-22, and were still ahead, 55-47, with less than four minutes left in regulation.

“A lot of bad calls is what I remember about that game,” Toole maintained almost nine years later.”

But he also remembered this:

“Probably one of my proudest moments in coaching. After that game, we go through the handshake line, and there was a number of (RMU) students and fans that had come to Providence to cheer us on, and they rode buses all night. So (head) coach (Mike) Rice kinda said, ‘Go over and give them a round of applause.’

“And so a lot of our players walked across the court, which was opposite of our locker room, and they waved to the (RMU) crowd and the crowd cheered them. And it was like a movie, as they walked from the one side of the court back to the locker room, everybody in the Dunkin Donuts Center stood up and gave them a round of applause. It was almost like everybody knew that they played their hearts out and just weren’t able to get over the top. They knew there were some extenuating circumstances, maybe, that kinda changed the game down the stretch.

“Just to see the level of respect those guys had earned was incredible. To have 10,000, 12,000 people all rise to their feet as the team is walking back to the locker room was a great symbol of what those guys where about.”

Sometimes, March reveals such a heart.

Even when yours has just been broken.