Designed by famed bon vivant Henry Hornbostel, the angled stone-and-brick edifice on Bigelow Boulevard is now home to an order of Catholic priests. 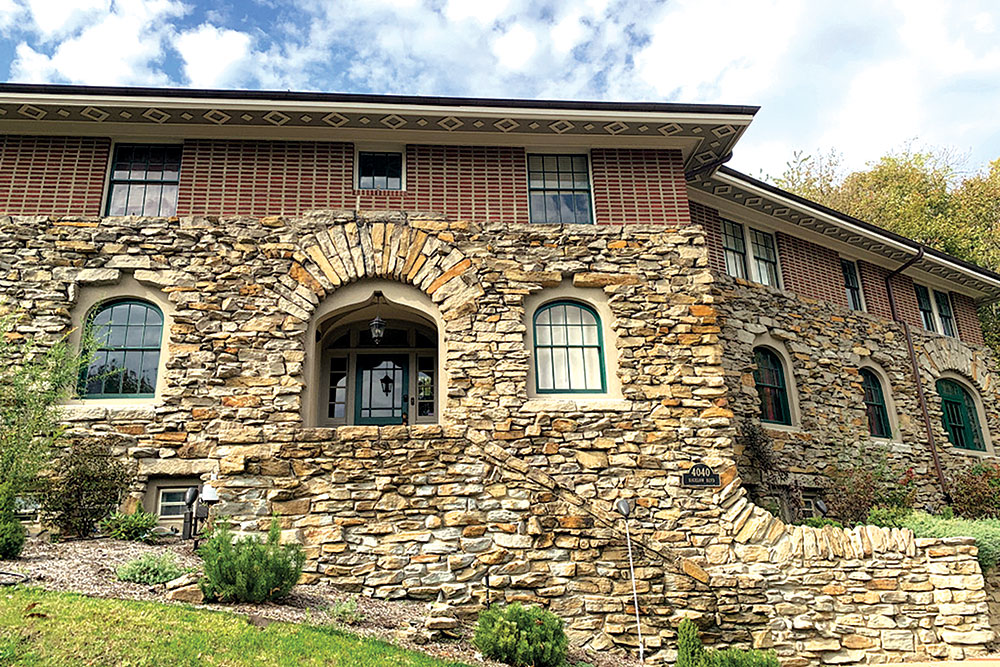 In between his major Pittsburgh commissions, the celebrated architect of Soldiers and Sailors Memorial Hall and Museum, Rodef Shalom Temple and the campus of Carnegie Mellon University also dreamed up one of Oakland’s most unusual homes.

Overlooking a sharp bend of Bigelow Boulevard is an eclectic, angled 2½ -story property that was the first Pittsburgh residence built by Henry Hornbostel.

Known as the Ledge House, it features a first-floor facade of irregular rubble that feels like an extension of the massive stone retaining wall towering behind the house and its neighbors on the block.

The residents, an order of Catholic priests, tend the great sloping wall as a garden. Fr. Michael Darcy, provost of The Pittsburgh Oratory, has the bedroom overlooking the yard and garden; he likes to watch the cardinals and goldfinches gather at the birdfeeders. 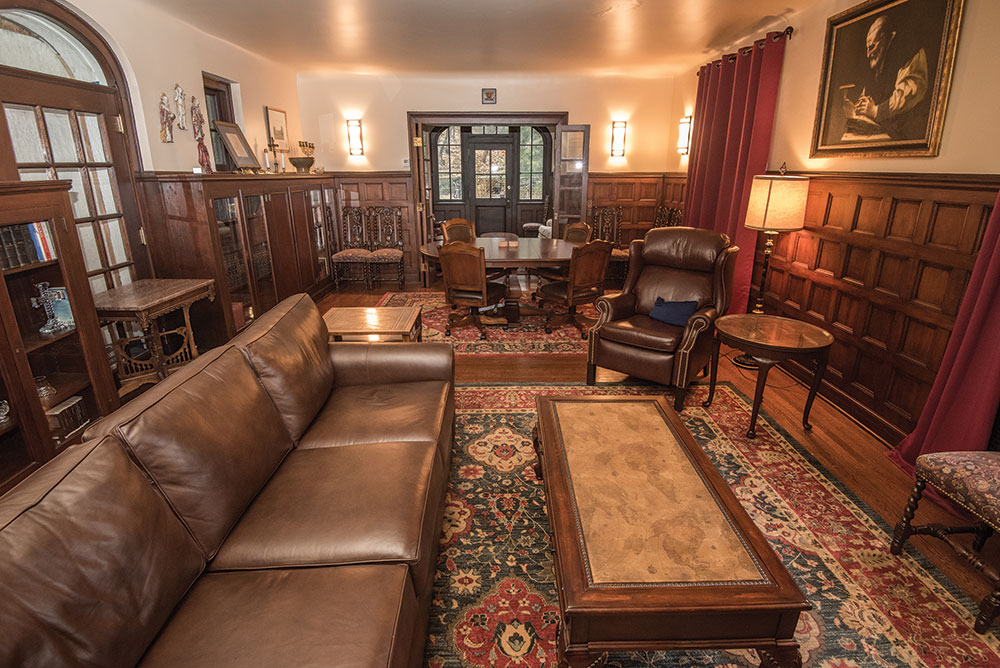 The Oratory owned the building for decades before selling it to a married couple and moving to a new house nearby in 1995. In 2017, needing more room, the order bought it back from the couple and set up one of the first-floor rooms as a chapel. It feels right at home in Hornbostel’s design; Darcy points to a swirling terracotta ornament under one large accent window that looks like it came from a Gothic cathedral.

“We are priests, after all, and the whole house has an ecclesial, churchy feel to it.” Darcy says. “It’s not just a normal suburban home.” 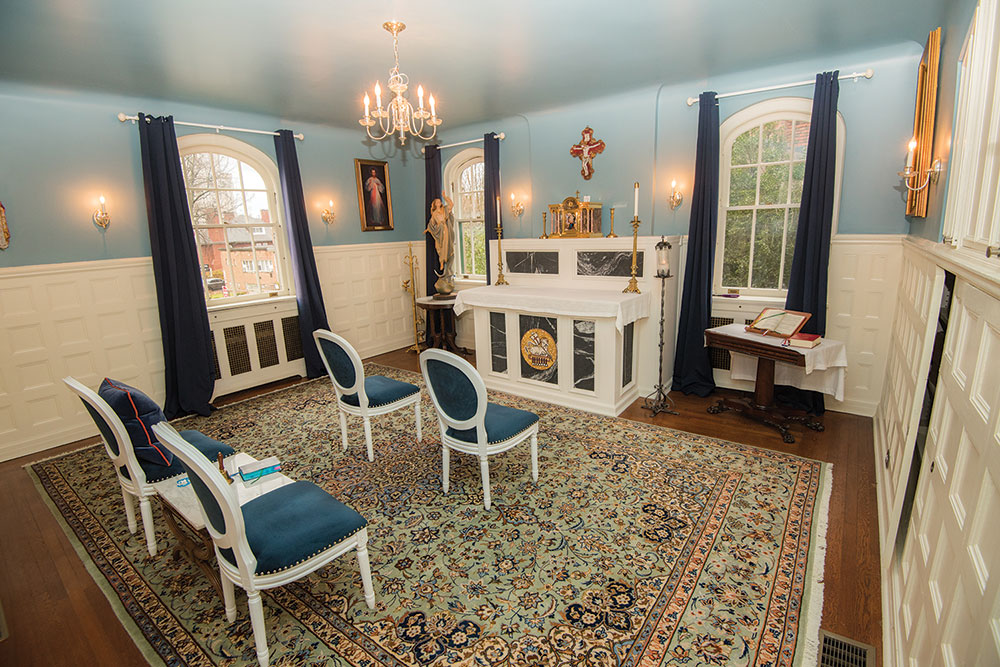 It was built for Arthur Hamerschlag, whom Andrew Carnegie had hired away from the New York Trade School to oversee his Carnegie Technical Schools, a vocational complex the steel billionaire was building on 32 acres across Junction Hollow from his great library and museum.

Hornbostel, another New Yorker, had submitted the winning campus design. As construction got underway, plans to build the director’s house on campus were set aside, and instead the architect created a showpiece in the nearby upscale residential development known as Schenley Farms. In 1911, the Hamerschlags hosted a spring reception in the house for the school’s graduating seniors, an event that became an annual tradition.

Hornbostel by then had already won further important commissions in town. One was a grand project to build the new University of Pittsburgh as an acropolis on the hill behind Soldiers and Sailors Memorial. That plan was ultimately abandoned a decade later in favor of the Cathedral of Learning. 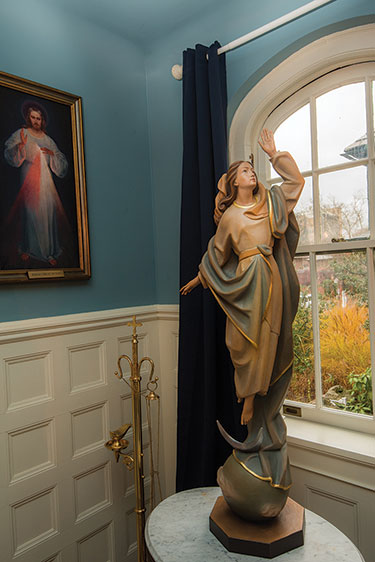 Still, the prodigious architect, educated at Columbia and the Paris École des Beaux-Arts, could boast of many successes — and not only in Pittsburgh. Hornbostel was the lead architect of two big East River bridges, the Queensboro and Hell Gate. He designed the nation’s first skyscraper city hall in Oakland, Calif., and many more major projects, including Pittsburgh’s City-County Building and its next-door neighbor, the Art Deco Grant Building.

Perhaps just as impressive, Hornbostel persuaded Carnegie to expand his job-training institute to include a fine arts school offering architecture, interior design, painting and drama. Carnegie hired him as its dean, and Hornbostel set about designing the magnificent structure to house it, with a Sistine Chapel-style ceiling mural of the world’s architectural masterpieces — including, over the main entrance, the dean’s own Hell Gate Bridge. In order to distract his no-nonsense patron from objecting to a theater in the building’s blueprints, Hornbostel labeled the auditorium a “dramatic laboratory.”

As a force of nature and bon vivant, Hornbostel was unrivaled. An avid bicyclist, he had ridden as a teenager all the way from his home in Brooklyn to Niagara Falls and back. At 50, he volunteered for service in World War I, serving as a major in the Argonne Forest and defying uniform regulations by refusing to shave his pointed goatee.

In his later years, when the Great Depression dried up building jobs, Hornbostel was appointed Allegheny County parks commissioner. The government post did little to dim his flamboyant streak. At a dedication ceremony for North Park Lake in 1937, he showed up to the boathouse in full dress uniform and declared himself admiral of the North Park navy, then announced he had spotted a sea serpent. His bosses eventually tired of the antics and pushed him out. Hornbostel’s last architectural endeavor was a house for himself and his wife in Florida, where he enjoyed a long retirement until his death in 1961 at the age of 94.

In all, Hornbostel designed 29 buildings for what is now Carnegie Mellon University. Some preservationists complained last fall when the school demolished his old gymnasium to make way for a modern replacement. In any case, his legacy is secure. A bust of Hornbostel — aptly depicted as Bacchus, the god of wine — was carved above the entrance niche of his fine arts building in 1990.

It gazes across the central lawn to the signature building of his ensemble, originally called Machinery Hall — but known since 1964 as Hamerschlag Hall, after the first resident of the lovely, odd house on Bigelow Boulevard.

Mark Houser is the author of MultiStories: 55 Antique Skyscrapers & the Business Tycoons Who Built Them.