The Latest Sign That East Liberty is Back? Signs. 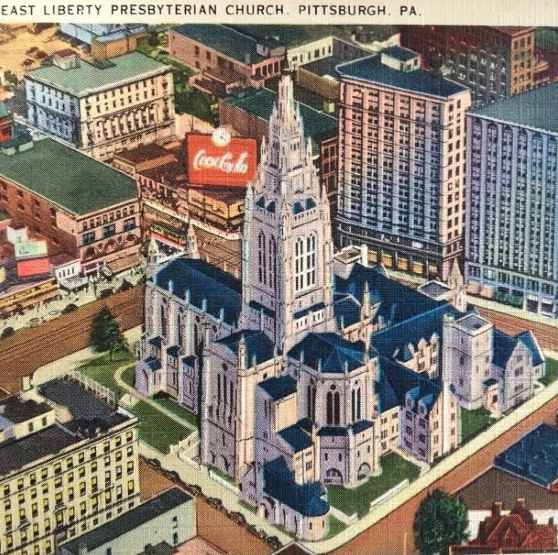 Pittsburgh’s no stranger to perplexing urban-planning oddities. It’s hard to argue that your system makes sense when you’ve got 90 neighborhoods crammed into city limits and people commute to work via something called an incline plane railroad (or, as we call it, the Duquesne Incline).

Now, it looks like one of the most controversial quirks of the Steel City’s urban planning is going to be undone once and for all. On Monday, East Liberty Development Inc. announced that, as part of the ongoing project to undo the Penn Circle urban renewal project of the 1960s, efforts are being undertaken to do away with the name itself.

By the end of the week, the confusing "Penn Circle East/West/North/South” names will be no more. The streets will return to their original names — Centre Avenue, Station Street and Euclid Avenue. 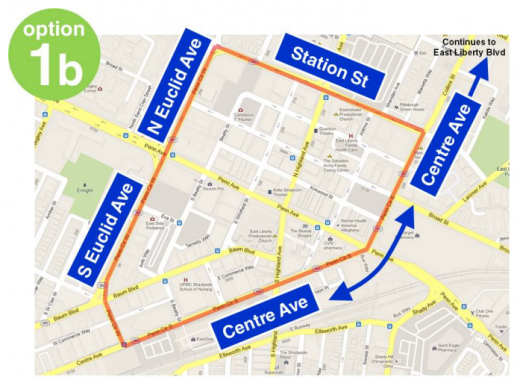 All of which might raise a question for transplants: Why was it ever called Penn Circle?

The answer lies in an old approach to urban planning that, according to University of Pittsburgh professor Edward Muller, became nearly every city’s last hope in combating the economic threat that suburban malls posed to their city’s economic life.

“Pedestrian malls — which is what they did in the inner part [of Penn Circle] — had become by the 1960s the ‘A’ solution for the business troubles that commercial districts were facing in the form of challenges from suburbia,” Muller says.

Thanks to the explosion in suburban growth and strip malls, the commercial districts of small cities were slowly on the decline. As Muller puts it, the idea for districts such as Penn Circle was to simulate the suburban mall in the middle of a city by placing a one-way road around the district and making the inside area walkable — because, as Muller says, the two “go together like a hand and glove in concept.”

Penn Circle wasn’t the first of these projects to pop up around the nation, and it certainly wasn’t the last. Throughout the 1960s, 200 of these urban malls were built around the country.

The 250-plus acre area was the target of the largest and, some might say, the most ambitious urban renewal project ever undertaken by the city. But like so many projects of its ilk, the predicted economic boom never showed up, and — says Loralynn Fabian, planning coordinator for East Liberty Development Inc. — the project left East Liberty’s commercial center isolated from its residents.

“A lot of people have always referred to it as a ‘moat,’” Fabian says. 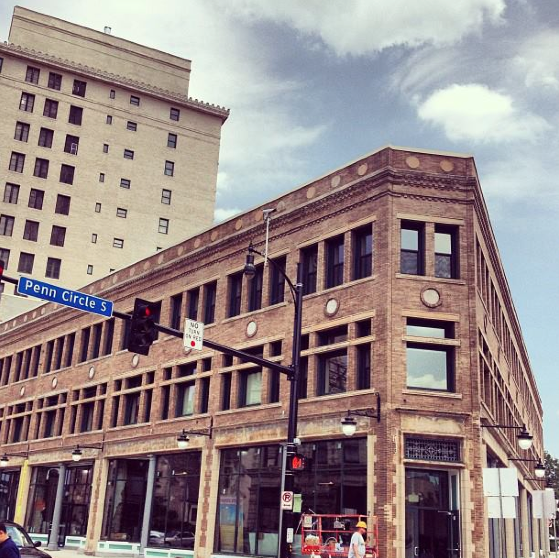 Even Bob Pease, the director of the Urban Redevelopment Authority at the time and one of the major proponents of the project at the time, has admitted that the project didn’t work out as anticipated.

"Suburban malls were developing so fast — East Liberty never had a chance," Pease told the Pittsburgh Post-Gazette in an article on the troubled neighborhood published on May 23, 2000.

Since the project’s heyday, the failures have been acknowledged, and efforts have been made to return the neighborhood to its previous state. The roads running through the area have been reopened to vehicles, and Penn Circle’s one-way roads again have become two-way passages.

Fabian isn’t interested in Penn Circle’s history, although she acknowledges that the project left its mark on the neighborhood.

“It’s really hard to speak to [the end of Penn Circle] because once you get into something that’s so perception oriented and emotional it’s polarizing. Every individual who has any sort of stake in East Liberty is going to have a very different perception of what urban renewal meant to them,” Fabian says.

Instead, Fabian says that she and others are looking to the neighborhood’s future — one that the city’s residents see as interconnected, community oriented and easier to navigate: “It’s more about where are we at today and where do we want to be in the future.”

#Hope: The Pittsburgh Foundation leads the charge to save August Wilson Center 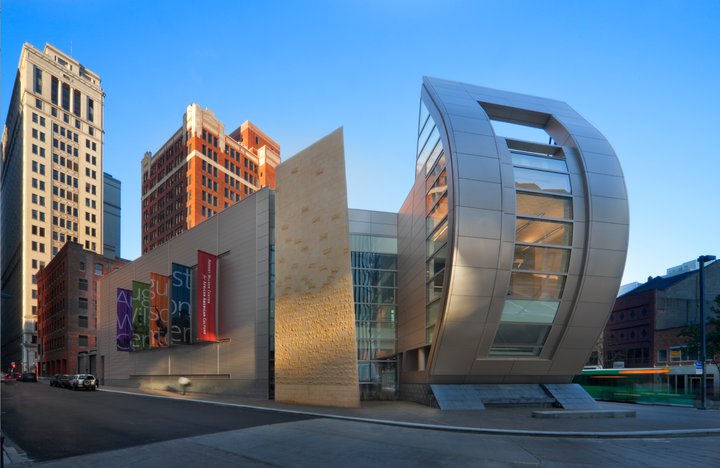 The future of the August Wilson Center for African American Culture, one of downtown’s most recognizable structures, has been mired in doom and gloom for quite some time. Glimmers of hope might be on the horizon: According to Mark Belko over at the Pittsburgh Post-Gazette, a collection of foundations highlighted by The Pittsburgh Foundation has submitted a joint bid to purchase the financially troubled center — with the primary objective of the bid and cooperation being to “save the August Wilson Center in hope that it may reopen and remain operating for the long term,” said The Pittsburgh Foundation’s John Ellis in a statement.

The details of the bid and the short-term future of the August Wilson Center remain fuzzy, but it’s a refreshing bit of good news nevertheless. 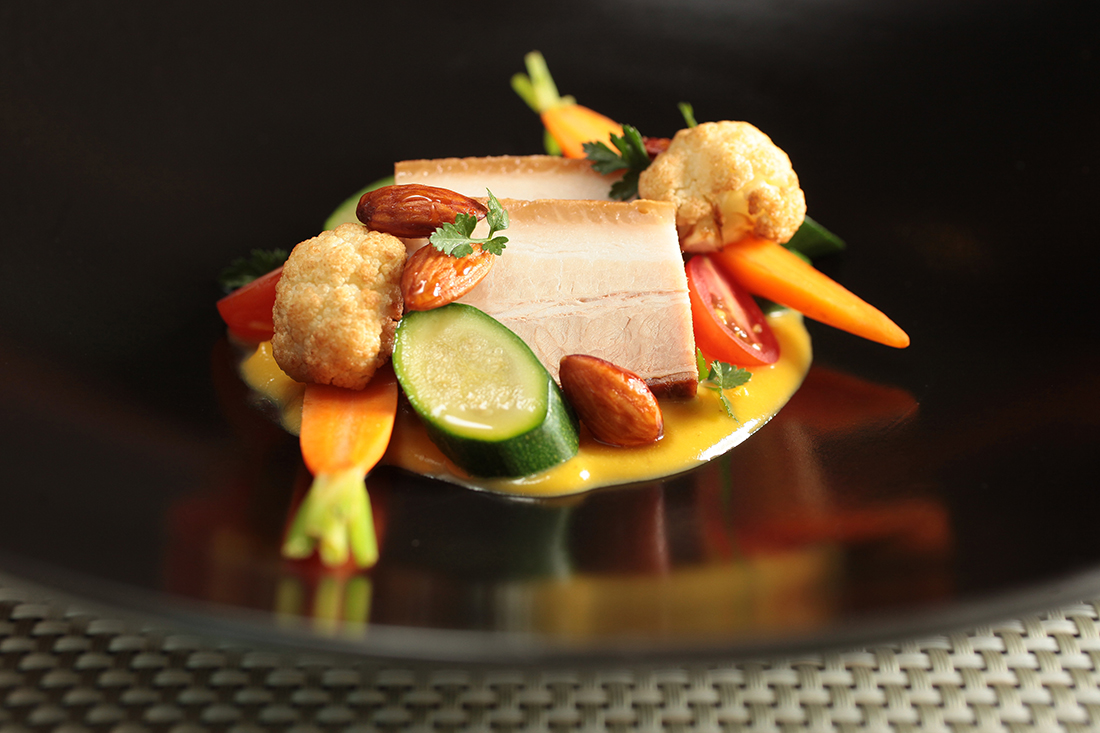 Fairmont Hotels and Resorts has named its Pittsburgh location as a model for its 80-plus hotels to follow. The Canada-based company has given Fairmont Pittsburgh its 2013 Hotel of the Year Award.

If you live here, it’s not likely that you’ll need a place to stay — but that shouldn’t stop you from visiting: Fairmont Pittsburgh also schedules live music regularly at Andys Wine Bar and provides an assortment of locally sourced dishes at Habitat.