Recounting the 90-year-old tale of Eleonora Duse, once the most famed actress in the world, who spent her final days in an Oakland hotel. 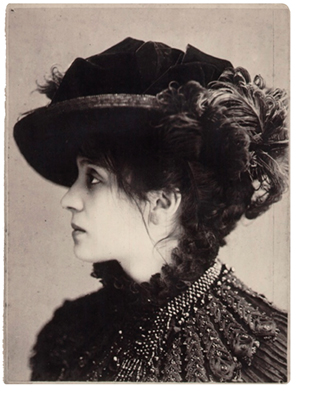 At the turn of the last century, Eleonora Duse was a superstar. Although she usually performed in her native Italian, she was an internationally famous actress; her modern, naturalistic style was a revelation and earned rave reviews everywhere she appeared. Her only real competition in fame and praise was the flamboyant French actress Sarah Bernhardt — but many critics and theatergoers, including playwrights Anton Chekhov and George Bernard Shaw, preferred Duse’s more controlled style of acting.

Leading the way for such single-name stars as Cher, Madonna and Beyoncé, she usually was known simply as Duse, sometimes La Duse. She was early fodder for gossip columnists due to her very active love life, which featured several husbands and (allegedly) lovers of both sexes. Her famous relationship with the Italian poet and soldier Gabriele d’Annunzio inspired Duse to new heights of artistry — but when the couple split in 1909, Duse was devastated and retired from the stage.

In 1921, she decided to make a farewell tour of Europe and America, and her fans — including many in Pittsburgh — were elated. In July 1923, she became the first woman to be featured on the cover of Time magazine. In spring 1924, after several stops on the West Coast and in Detroit, Duse arrived in Pittsburgh to appear on stage at the Syria Mosque in Oakland.

She checked in to the stately William Penn Hotel on April 1 but soon changed hotels after learning the elegant Hotel Schenley in Oakland (which now serves as the University of Pittsburgh’s Student Union) was much closer to the theater. Word got out that Duse wasn’t in the best of health, but the show had to go on.

On a very rainy April 5, Duse was driven across the street to the Syria Mosque; they were met with confusion, as the stage door was locked. The great tragedienne and her assistant were left standing in the rain until the door could be opened. (Ironically, she was here to perform in a play titled “La Porta Chiusa” — “The Closed Door” — by Marco Praga.) Exposure to the rain may have seriously exacerbated her already frail condition.

She nonetheless wowed the Pittsburgh audience that evening and received glowing reviews from the local press. Her next scheduled stop was Cleveland, but she lingered at the Hotel Schenley. People speculated that she was enamored of Pittsburgh as a good place to pause and rest; in reality, she was very sick with pneumonia. She canceled the Cleveland appearance. Despite public denials that anything was amiss, her condition worsened, and on April 21, at age 64, she died in her room at the Hotel Schenley.

It was news around the world. The Italian ambassador came to Pittsburgh to make arrangements. People paid respects at Samson Funeral Home on North Neville Street in Oakland. Later, her body was taken to New York, where fans came to pay homage for days. Her casket was eventually loaded onto a ship headed to Italy.

In 1949, on the 25th anniversary of her death, a special plaque was installed at the Hotel Schenley; you still can find it in the marble-paneled lobby of the Pitt Student Union. Another plaque honoring her hangs in the School of Drama at Carnegie Mellon University.