The Kid Stays in the Picture

Breaking down the risk of Sidney Crosby's new 12-year deal with the help of science. 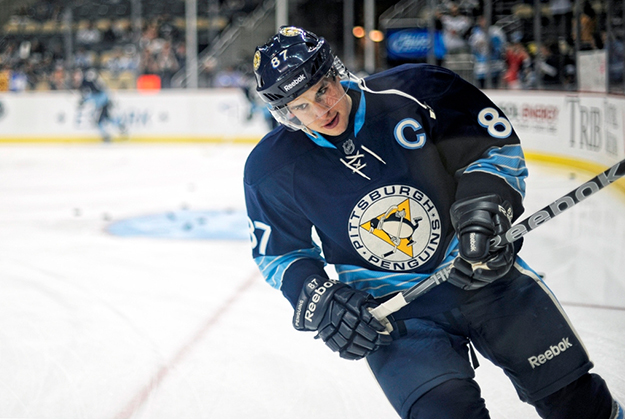 On Sunday, Sidney Crosby will put his signature on a $104 million contract extension that will keep him in black and gold through the dystopian future of 2025, when the seats of CONSOL Energy Center will surely be equipped with Coors Light I.V. drips and the skating Penguin on the team’s jerseys will be swaddled in a brand-synergized American Eagle cardigan.

Crosby's mega-deal will count just $8.7 million against the salary cap for those years, which is exactly the same average salary that he earns now. Somewhat startingly, some fans had expected the NHL’s only truly marketable superstar to take a pay cut due to the two years he lost in the post-concussion wilderness. Is a decade-plus contract too much of a risk for a player who looked a shadow of his former self when faced with playoff-caliber contact against the Flyers?

This assumes that it's Crosby who owes the Penguins a debt and not the other way around. History begs to differ. In 2004, a year before Crosby came to the Penguins, the franchise was dead-last in league attendance and playing in the NHL’s most dilapidated barn. Forbes had the Penguins valued 29th in the NHL during the 2004 lockout with a total franchise value of $101 million, an amount less than the value of Crosby’s new deal. The Penguins took in gate receipts of just $20 million that year, $4 million less than the Atlanta Thrashers.

So how did we get here — the Stanley Cup, the Winter Classic, the NHL Draft? The narrative says that Mario Lemieux saved the franchise. But that’s only partly true. The cause would’ve been hopeless without the electricity that Crosby brought to the city. He made hockey relevant again in a football town. According to Forbes, from 2006 to 2009, the value of the Penguins' brand grew by an NHL-best 88 percent. You know the rest. Mario finally got his new arena, the corporate sponsors started barging down the door, and free agents began to leave millions on the table to come play for a franchise that not long ago had one foot out the door to Kansas City.

Perhaps three years of post-Cup brand management, Nickelback Cover Band promos, and the installation of gourmet burger stands in the clogged arteries of the CONSOL have made it seem like Kansas City was a long, long time ago. But make no mistake, despite two years trapped in the dark woods of post-concussion syndrome, Crosby is still the NHL’s most valuable asset and when completely healthy, the game’s undisputed best player. He's what keeps the dollars rolling in to Pittsburgh.

And yet many fans and media members think the Penguins committed $104 million to a ticking time bomb. This week, I talked to former New York Rangers goalie Mike Richter, who was forced into retirement in 2003 after sustaining a combination skull fracture and concussion. Richter’s post-concussion symptoms lasted for years (he could barely walk for 10 minutes before keeling over in exhaustion) and he admitted that every time he watched Crosby play after his return last season, he was nervous. “You couldn’t help but hold your breath when there was any contact,” he admitted.

Penguins fans can relate to the anxiety Richter describes, whether they want to admit it or not. But is Crosby, at just 24 years old, really damaged goods? Is he one hit away from returning to the wilderness?

The truth is that the prudence of Crosby’s deal hangs on a medical conundrum that still remains unsettled: If an athlete suffers a major concussion, does it make him or her significantly more susceptible to sustaining additional concussions?

Using Twitter as a barometer for public opinion, it seems that most fans believe that yes, indeed, Crosby is at an extremely high risk to suffer another major injury.

However, the prevailing opinion of neurosurgeons and neuropsychologists is actually quite different. This week, at a concussion roundtable in New York City hosted by l (Protection Athletes Through Concussion Education), Dr. Mark Lovell, an international concussion expert and founding director of the University of Pittsburgh Medical Center Sports Medicine Concussion Program, reaffirmed his belief that once an athlete is 100-percent symptom free and neurological tests have stabilized back to the baseline, the risk of sustaining a new concussion is the same as it was before the athlete suffered the initial brain injury.

“If you manage this correctly, the potassium will go back into the cell, the calcium will go back out of the cell and that membrane will go back to normal,” he said of the brain’s energy crisis. “The great majority of the time, you can hit the reset button on these athletes, if you make sure, again, that the cows are back in the barn. You have to do the right evaluation to make sure that’s happened."

The problem is that since symptoms can be fleeting and vague, it’s still very difficult for physicians to determine when an athlete is “100-percent” healed, or when the brain’s energy crisis has subsided. The increased risk factor comes into play when a player is not fully healed from the initial concussion.

"When brain cells are in this energy crisis, there’s two things that you do not want to do,” Collins says. “Number one is get hit in the head again. Because if you get hit in the head again when this problem starts, a lot less biomechanical force is going to cause what some people think is another injury, but which is actually an extension of the first injury. It doesn’t take much of a blow to cause that energy crisis to become worse and worse and worse.”

Back in 2002, Richter had tried to return to the ice just four days after taking a puck to the ear. At the time, he told reporters that he was starting to feel better and wanted to play in the upcoming playoff games. Only when a precautionary CAT scan revealed a skull fracture did he hang up his skates for the season. Two years later, long after he’d retired to the couch, he was still suffering from dizziness, exhaustion and an inability to fall asleep.

“I still have a lot of headaches,” Richter told me, a full decade after his retirement. “I get lightheaded when I lift weights. I have gotten my life back, but there are still symptoms.”

But Richter stressed that those were very different times. A comprehensive study released in April by the University of Calgary revealed that one in five NHL players who sustained a concussion during the 1997-2004 seasons went back on the ice that same game. While Crosby unknowingly did the same thing during the Winter Classic, he's fortunate to be living through a revolution in concussion research and education. And according to those on the cutting edge of the science, the brain’s defenses can return to normal if given proper rest and, most importantly, time to mend.

If you think about the biomechanics of the brain, this makes sense. A concussion is an event whereby the brain moves inside the skull by rotational forces. The brain is shaken because it is encased in fluid. No one has stronger or weaker brain fluid. Saying an athlete is “concussion-prone” is a bit of a lie. It's like saying someone is prone to car accidents. The real difference is how athletes react to post-concussion symptoms. Some have crippling headaches that last months. Some don’t have headaches at all. Some suffer from suffocating anxiety. Some don’t. Some are fine after a few weeks, while others, like Richter, exhibit symptoms for years.

The key isn’t the concussion itself, but rather how the brain is managed after the fact. Many have pointed to the past 18 months as proof that Crosby will never be the same, but Richter believes that it's just the opposite. "The Penguins have been absolutely fantastic in their handling of the injury with the incredible patience they've show," he said, "And I think Crosby has shown a lot of courage keeping himself off the ice to recover."

With post-concussion syndrome, the only way to escape the woods is to keep walking through the darkness until you come out the other side. Some saw two lost seasons as a death sentence. Others, like Richter, saw the layoff as hopeful.

This is crucial to understanding why the Penguins felt comfortable committing to their captain for 12 more years. For every Eric Lindros, who badly mismanaged countless (literally, they weren’t counted) concussions, there is a Patrice Bergeron, who has overcome multiple concussions with patience. How many Penguins fans thought Kris Letang was done for the season after taking a shoulder to the chin just a few months after returning from a concussion? And yet after experiencing some mild symptoms, he was concussion-free and played the rest of the season. Because the first injury was handled properly (a rare event before 2010), Letang walked away from a car crash.

Science still hasn’t cracked the nut of post-concussion syndrome, but that’s entirely irrelevant to the risk assessment of Crosby’s contract extension — as long as he’s symptom free and his neurons are completely nourished with energy when he puts pen to paper on Sunday. That doesn’t mean that he’ll never sustain another concussion, nor does it guarantee that his symptoms won’t be severe if that does occur. But that’s a risk inherent in any contract in today’s NHL. Every player is just one instant, one elbow away from two years of oblivion.

The real curiosity is fans’ mixed reaction to a sweetheart deal that not only gives the Penguins the financial wiggle room to pursue high-priced free agents Zach Parise and Ryan Suter this off-season, but opens the franchise’s Cup window for the next decade. If lightning strikes thrice and Crosby is relegated to the press box for another two years, or even for his entire career, fans should remember that it was #87 who built that press box and the entire barn that houses it. Crosby took millions less than market value to stay with the very team that he saved from the U-Haul trucks.

Only Sidney Crosby knows if his head is in the right place, but everyone should know that his heart is.