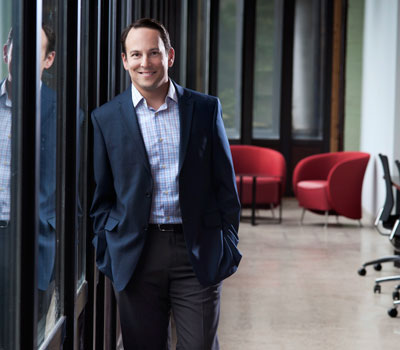 Though lung disease remains one of the leading causes of death in the United States, there are few technologies available to help support the lungs.

To address this, ALung Technologies developed the Hemolung Respiratory Assist System, a device that removes carbon dioxide from the blood for patients suffering from acute respiratory failure.

“We are the only company in the world that has developed a safe and effective technology specifically designed to remove carbon dioxide from the blood,” says ALung’s Vice President of New Technology Jeremy Kimmel, Ph.D. “With a small, homegrown team, we have been able to develop a new technology that has saved patients’ lives.”

ALung, founded in 1997 as a spin out from Pitt’s McGowan Institute for Regenerative Medicine, received early support from Innovation Works when the team was just the original founders. Now the company consists of 26 employees, with five in Europe. Kimmel joined after completing his Ph.D. and post-doctoral research at the University of Pittsburgh in ALung cofounder Bill Federspiel’s lab. From there, Kimmel grew the company’s research and new technology group from the ground up.

“Pittsburgh has a vibrant startup community, especially in the life sciences and medical devices,” says Kimmel. “Extraordinary resources in the city like medical centers, universities and technology incubators have allowed Pittsburgh to become a leader in biomedical research and entrepreneurship.”

Kimmel says meeting the patients who have benefited from ALung “are among the proudest moments in ALung’s history.”

“As a biomedical engineer, working at ALung and developing new technologies to improve people’s lives has been the most rewarding journey of my career.”