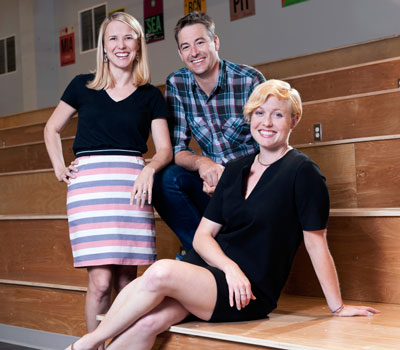 “Starting Thread has been the greatest adventure of my life,” says Kelsey Halling, the company’s director of impact.

With the aim of “cleaning up” the textile industry, Thread transforms plastic garbage from developing countries into fabric for brands that want to use responsibly sourced materials.

“We’re creating the most transparent and responsible fabric on the planet in an industry that is infamous for its opaqueness,” says Halling. “Thread looks at waste as a resource to create jobs in the developing world. Everything we do, from fabric innovation to storytelling and job training in Haiti, comes back to one thing: how can we have the greatest positive impact on our planet and the people living on it.”

Thread was founded in 2011 with early-stage investment and support from so many Pittsburgh resources: Idea Foundry, Innovation Works, BlueTree Allied Angels, Draper Triangle Ventures, Riverfront Ventures and the Urban Redevelopment Authority. Today, Thread has 10 employees in Pittsburgh and one in Haiti. The company also recently initiated a micro-loan program in Haiti through which Thread loans money to Haitian recycling entrepreneurs within its supply chains to support sustainability, growth and education.

“Our team comes to work every day to revolutionize the second dirtiest industry on the planet. We’re dedicated to changing the world in a very tangible way — creating dignified jobs, respecting health and the environment and making the most responsible products on the planet, so consumers can feel good about where and how they spend their money,” says Halling. “We work hard every day to earn the right to work hard again the next day. Our team thrives on this.”

Thread’s clients include Moop, a local company that uses Thread fabric in its handmade bags, and international lifestyle brand Timberland. The companies recently announced this partnership in which Thread fabric will be used in Timberland’s spring 2017 bags and footwear collection.