The House That Love Built

For Father’s Day, Maggie Hardy Magerko gave her father, 84 Lumber owner Joe Hardy, a fitting gift: a home renovation. See the results of the renovation that brought the outdoors into the Farmington home. 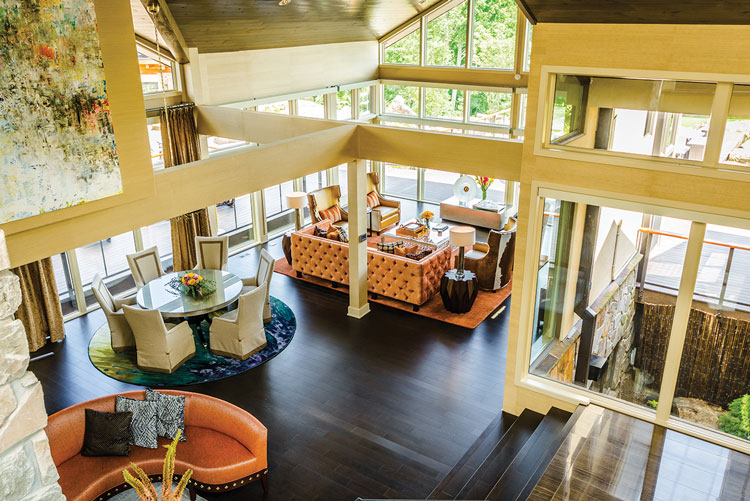 To show her father he means the world to her, Maggie Hardy Magerko designed a piece of it with him in mind.

Joe Hardy previously lived in the home located on the grounds of Nemacolin Woodlands Resort, which the family owns and developed. Hardy Magerko initially planned to transform the residence into a corporate retreat space.

“As the project progressed, I really became attached to what we were doing there and felt like, ‘Wow, this could really be an amazing home again for [the family],’” says Hardy Magerko, 50, president of 84 Lumber, the company her father founded. “A few months before the project was scheduled to be completed, I decided to complete the renovation as a surprise for my dad.”

She managed to keep her intentions secret and presented Hardy with the gift on Father’s Day 2015. Since then, the home has been the center for many treasured gatherings. 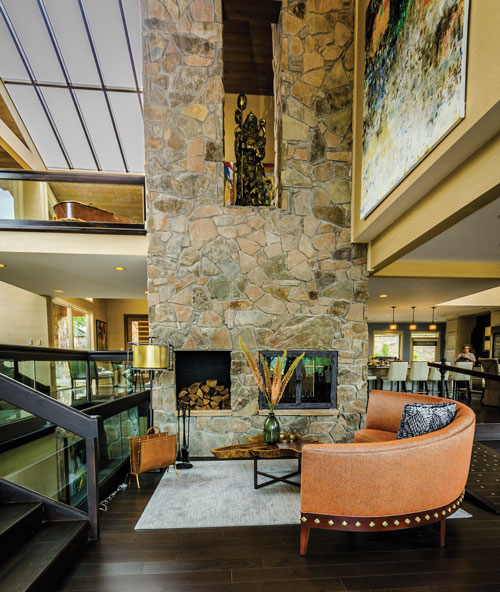 “It has meant the world to me,” says Hardy, 93. “It took so much time and dedication. It’s just absolutely perfect. The level of insight Maggie showed on every detail of the house meant a lot to me. She took into account every aspect of our lives when completing the renovation.”

The result is a home in which every detail reflects the family’s storied history and personal style. Hardy Magerko tasked interior designer Dina Caruso and Caruso’s then-partner Terry Cumberledge with creating a haven in which the family can entertain and unwind.

Caruso, now of Caruso Design Group in Evans City, works primarily in hotel design and was eager to embrace a new challenge. She started work on the home in December 2014 and immediately found inspiration in its setting, nestled behind the Pete Dye golf course and the wildlife area at the resort in Wharton Township, Fayette County. The stone and wood of the home’s exterior enable it to fit naturally into the site surrounded by lush greenery.

Inside, all materials and treatments work together to draw the focus outdoors. Floor-to-ceiling windows offer sprawling views of the property. The wood flooring matches the ceiling and the veranda flooring, while Eramosa marble is laid in a pattern to draw the eye through the entry.

“Everything is real and natural,” says Caruso. “Here in Pennsylvania with four seasons, we had to make sure everything worked, whether it was summer, spring, winter or fall. Even on a grey day, it all works.”

Equally refined and fanciful, the home presents surprises throughout, beginning at the front door. When standing in the grand entrance, guests are greeted by an oversized bell-shaped light fixture hanging from the stone porte-cochère overhead. The piece is an original created by Dutch designer Marcel Wanders. “We thought the bell was whimsical, and the family does like [sophistication and whimsy],” says Caruso.

The front door pivots to admit guests into the entryway, where cream silk wall coverings and wool rugs set the welcoming tone. Visitors also will notice the faint sound of flowing water emanating from one floor below. On the home’s base level, an art installation features water streaming around two pieces of copper. The pieces previously served as the home’s front doors.

“Maggie told us they were one of Mr. Hardy’s favorite parts of the home, so we wanted to save them,” Caruso says. “She was very gracious in letting us be creative [in that way].”

Hardy’s well-known appreciation for art is on display in most rooms. The collection includes everything from abstract to Asian-influenced pieces, some dominating entire walls and others popping up in unexpected places such as the walls of walk-in closets. Most are the works of Pittsburgh- area artists, including the bold paintings of Michael Lotenero, imaginative images by Gavin Benjamin and playful nature scenes by Ashley Cecil.

“Dad and I both have a great appreciation for art, so art selection played a big role in the renovation,” Hardy Magerko says. “I purchased all of the art in the home specifically for dad.” 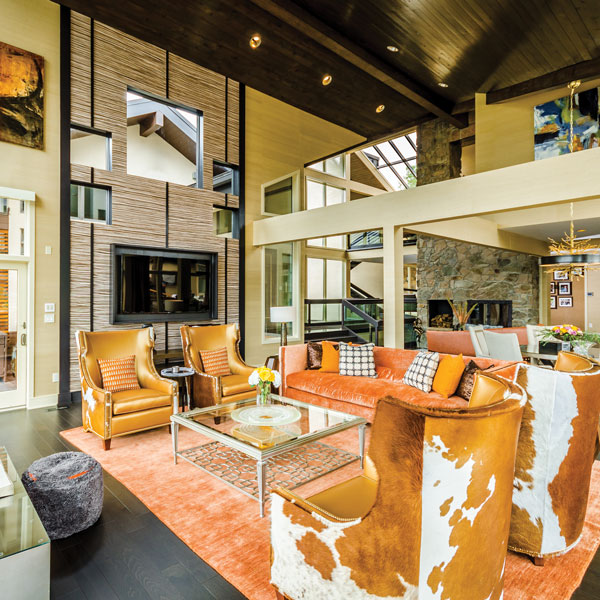 Even the home’s functional items serve as artwork, offering interesting visual and tactile experiences. Cowhide chairs are the statement pieces of the living area, creating a ski-lodge vibe reinforced by the towering stone fireplace. A slice of teak serves as a table. In a continuation of a tree theme found throughout the home, a branch-shaped chandelier illuminates the breakfast nook. The dining room table — a custom piece created in Mexico — is made of tree roots, and splits in the surface wood are filled with turquoise.

Perhaps the most valuable pieces of art hang against the sparkling mica wall leading to the kitchen. An assortment of coordinating frames displays dozens of family photos. “It was very important to the family to have a wall of family pictures that everybody could see,” Caruso says. 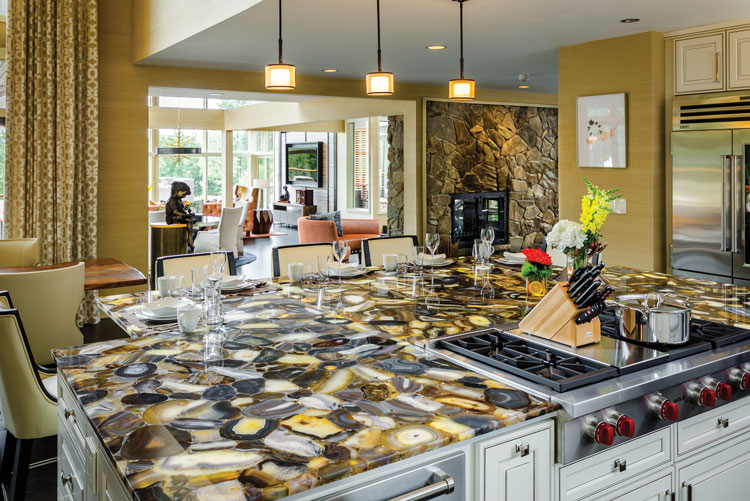 In the kitchen, slices of shimmering agate create a dazzling pattern atop the island, which can seat six. It features an open top-of-the-line cooktop where guest chefs can face a group while creating their dishes. While such new additions add a fresh energy, the home also features many pieces that have been in place for years.

In Hardy’s study, Caruso retained the original grasscloth wall covering, as a supply of the material remained in storage to patch problem spots. Original built-in shelves showcase an array of Hardy’s personal items from his travels, while a new lamp fashioned in the shape of an oversized compass adds a fun touch. A set of low armchairs that had been used in the room previously were reupholstered in an earthy green velvet. Underfoot in the study, an unexpected feature in the form of leather tiles adds to the warmth and masculinity of the space. Hanging above Hardy’s desk is a framed painting depicting cigars, which he is well-known for enjoying. It is one of many touches intended to capture his distinct personality. 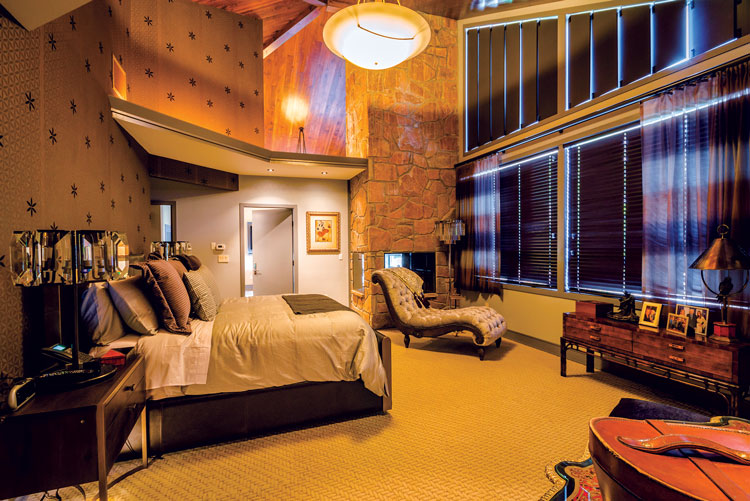 Past the exercise area and a spa room equipped with masseuse table and facial station is the master bedroom, where more surprises await. Swarovski crystals are embedded into one wall covering, allowing deep plum accents atop a periwinkle-and-taupe background to sparkle when the glass lamps are lit. Ombre sheers hang over leather blinds that open to reveal the home’s stunning outdoor area: an oasis where round swing chairs dangle before the curved pool. A wraparound deck reaches a fire pit tucked into a wall of natural rocks, and views of the resort span far into the distance.

“The outside living areas are [some] of my favorite places to be — just sitting in the rocking chairs on the decks, taking in the beauty of the Laurel Highlands,” Hardy says.

Because the home was going to be renovated for use as a corporate retreat, every bedroom is designed to be a master bedroom with an en suite bath. “We wanted everything to have personality,” says Caruso. 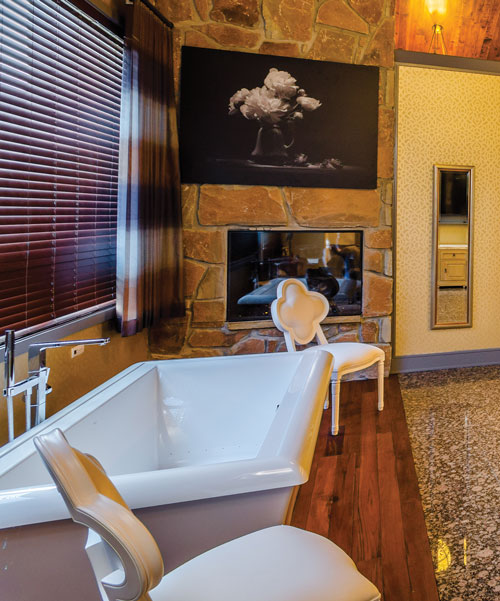 Taylor’s room holds another surprise — a spiral staircase leading down to her massive, multi-room closet. Such imaginative touches reflect the joy Caruso found in designing what anyone would consider a dream home.

“It really was an honor to be part of a home like this,” Caruso says.