The newlyweds set off to Jamaica for the honeymoon of their dreams. Will an unexpected visitor named Nicole ruin their trip?

After an exhausting wedding weekend, my new husband and I boarded a 7:00 a.m. flight to Montego Bay, with a short layover in Charlotte. Both flights were smooth, and we landed in Jamaica at 12:45 in the afternoon. After retrieving our luggage and going through customs, our Sandals experience began. We were shown to an elaborate lounge and served our first of many Red Stripes. A few minutes later, we were taken to a bus where 50 or so fellow-honeymooners piled on ready for our nearly three-hour drive to Ocho Rios.

When we stepped out of the Montego Bay airport, the sun was shining and the sky was clear. Little did we know that would be just about the last time we would see the sun all week. Tropical Storm Nicole decided to join us on our honeymoon, and about a half-hour into the bus ride, it began to rain. The rain continued for the next seven days.

Just out of the airport parking lot, we discovered that driving in Jamaica is quite different than in the U.S., for several reasons. Not only is the driver on the wrong side of the vehicle and the vehicle on the wrong side of the road, but the drivers are much more aggressive. The bus driver weaved in and out of traffic forcing cars off the road. Eventually, I had to just close my eyes.

A very long and stressful three hours later, we were finally there–Sandals Grande Ocho Rios. We were greeted with champagne during check-in, then taken to our garden-facing room. (We chose not to shell out the extra money for the oceanfront room, and I’m glad we didn’t. The oceanfront rooms were more like a hotel, rising up at least 20 stories. While our ground-level garden room had a beautiful porch surrounded by plants and flowers.)

After a quick nap, we enjoyed our first of many delicious three-course meals, then decided to hit the hay early since we were still recovering from the weekend. We returned to our room to find the bed turned down and decorated with flower petals, along with mood-lighting and the local light-rock station playing romantic music. It was a nice, relaxing way to end a long day.

We awoke on our first full day in paradise to a beautiful sunrise and an unbelievable breakfast buffet, complete with the world’s most delicious coffee. We hurried back to the room to change into our bathing suits prepared for a beautiful day at the beach (which is very small by the way. If you’re looking for long-stretching white sand, don’t go to Ocho Rios). We chose two prime lounge chairs right next to the water and immediately went in for a dip. The sparkling blue water was bathtub-warm and so refreshing that we hardly noticed the rain that began to fall.

We spent most of the day going between the hot tub and swim-up bar, enjoying strawberry daquiris and pina coladas in the rain. We met two very nice couples, one from Harrisburg, the other from Milwaukee. The Harrisburg couple had never spent more than three days together in their entire four-year relationship. They all seemed shocked to hear that we had lived together for two years, but I just can’t imagine marrying anyone I hadn’t spent more than three days with.

Wednesday brought more rain, which consequently canceled our plans to swim with the dolphins. So, we kayaked in the ocean and spent the rest of the day relaxing and exploring the resort.

Thursday morning showed signs of sun, so in an effort to fight off cabin fever, we decided to venture off the resort grounds. The concierge called us a taxi to take us into Ocho Rios to do some shopping. Our driver, Dalvern, pointed out places of interest and got our shopping trip started at his "favorite" store in the shopping complex, which for some reason had no electricity. It was a rather intimidating experience, wandering around a dark store in a strange country being followed by the shop owner who was desperately trying to give us a deal on Cuban cigars, knock-off purses and knick-knacks. When he forced us to try his rum punch, all I could think is that we were going to be on Dateline–"American Honeymooners Drugged and Attacked by Jamaican Shop Owner." I politely pretended to sip from the cup while trying to hurry along Mr. Right in his decision over which Bob Marley shirt to buy. Each of the souvenir shops had pretty much the same merchandise, so the rest of our shopping trip went quickly.

That afternoon, we were really excited for the Reggae Vibes catamaran cruise to Dunn’s River Falls. The sun was beating down as we boarded the boat, and I thought I might finally get some sun. But, as luck would have it, the rain returned just after we set sail.

Climbing Dunn’s River Falls–600 vertical feet of natural rocks and cascading water falls–was one of the coolest experiences ever. After the climb, we set sail once again, stopping on the way back to snorkel. Once I got the hang of breathing through the mouthpiece and kicking with my flippers, I really enjoyed snorkeling. The rest of the cruise was spent dancing to reggae music and eating Jamaican food.

On Friday, we went to Dolphin Cove. While swimming with the dolphins was an amazing experience, the run-down little amusement park was actually a bit sad. We were trapped there for three hours until the shuttle driver returned. As usual, it was pouring down rain, and there wasn’t a whole lot else for adults to do once our dolphin experience was over.

On Saturday, we once again awoke to rain, so we decided to be adventurous. None of the other couples we met dared to venture off the resort, but my reggae-loving husband really wanted to visit Bob Marley’s birthplace. So, we dialed up our new friend Dalvern to take us on the two-hour trip to Nine Mile. He took us through Ferngully (which is not "the last rainforest" as the early-90s movie portrayed, rather a roadway featuring thousands of species of ferns) and up the side of a mountain. With all of the rain, many of the mountain’s one-lane roads were washed out making the drive to the top quite scary, but I couldn’t close my eyes this time–it was too beautiful. 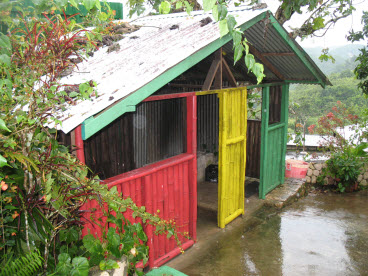 The Bob Marley Mausoleum sits atop the mountain surrounded by a smokey haze. We took off our shoes to pay tribute to Mama Marley and the "Lion of Zion," Bob Marley himself. It was pretty cool to see the single bed of "Is This Love" fame and the rock where he wrote some of his most famous songs. At the end of the tour, we passed up the chance to tour the marijuana plantation down the road.

On the way back, Dalvern took us to his favorite jerk center where we ate the most delicious jerk chicken and sweet potatoes. If you ever make it to Ocho Rios, please do yourself a favor and call Dalvern. While Sandals was amazing, we never would have been able to experience the real Jamaica if we hadn’t had such an awesome taxi driver.

Our final day at Sandals started with an oceanside couples massage. If I could start every day or even week this way, I would have nothing to complain about. Much to our surprise, the sun was still out after our massage. We quickly changed into our suits and enjoyed more than two whole hours of complete sunshine. The heat was nearly unbearable, but after six days of rain, we didn’t mind. Later that evening, the redness began to appear and we knew that our skin had been fried. At least it was the slightest sign that we had been somewhere tropical, right?

We spent our last night at our favorite resort restaurant, Valentino’s. Being a picky eater, I was a little nervous about the quality and variety of food, but honestly, every meal we ate was delicious. It’s pretty amazing to eat and drink all you want without getting a bill or leaving a tip.

My favorite part of the whole trip was being completely unplugged from my cell phone and computer. We didn’t have to worry about our experiences being ruined by some inconsiderate person talking or texting on their cell phone. Mr. Right and I had seven days to concentrate on nothing but ourselves.

Rain and all, we had an amazing honeymoon. The staff at Sandals was second-to-none. Everyone was unbelievably friendly and there to grant your every wish. I highly recommend going all-inclusive and Sandals in particular. We loved it so much that we signed up for the loyalty program, so after our ninth visit, the tenth stay is free! I guess we better start saving for our next trip.