The Homestead Artist with a Worldwide Reputation

Jesse Best maintains a presence in New York and Tokyo. But, he says, Pittsburgh has been 10 times better to him than any other place. 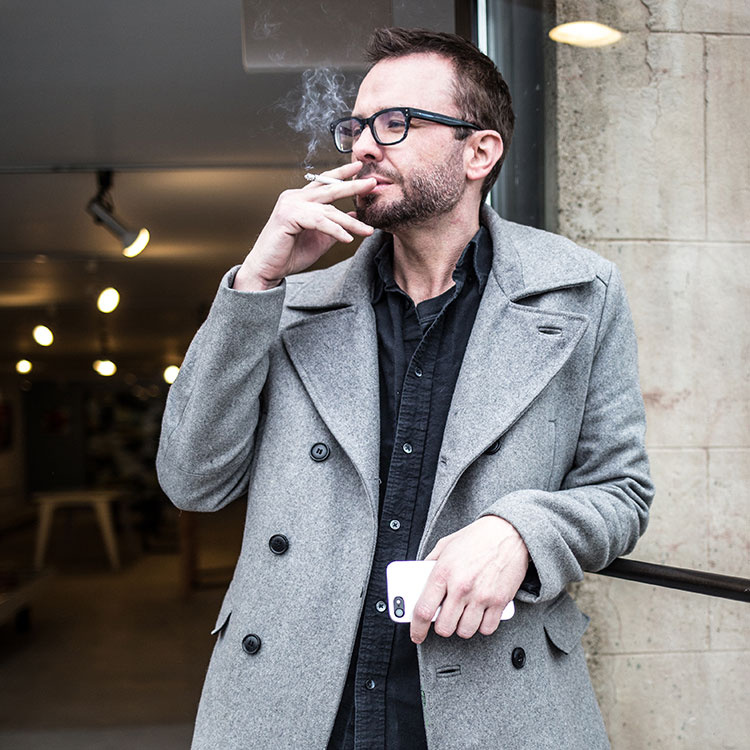 The paint doesn’t come from an exclusive art supply store. It comes from Lowe’s.

When he returns to his studio/gallery a few blocks away in Homestead, he opens a brown FedEx box that arrived from somewhere in Florida. Inside are two gallons of Ultra Clear resin. After a few minutes, he crouches over “The Clarity of May,” a 48×32 acrylic on wood propped up by two black milk crates, and begins pouring the resin over it: thick, gooey, colorless pudding he’ll spread around with his favorite brush that he paid, like, three bucks for, also at Lowe’s. It’ll finish hard.

Best has an upcoming solo show in December at Galerie Michael Schultz, one of Berlin’s biggest spots for contemporary art. He maintains a presence in New York and Tokyo. But, he says, Pittsburgh has been 10 times better to him than any other place — allowing him to, in November 2017, christen the Jesse Best Gallery with a reception that included his parents and his 10-year-old daughter, Veva. 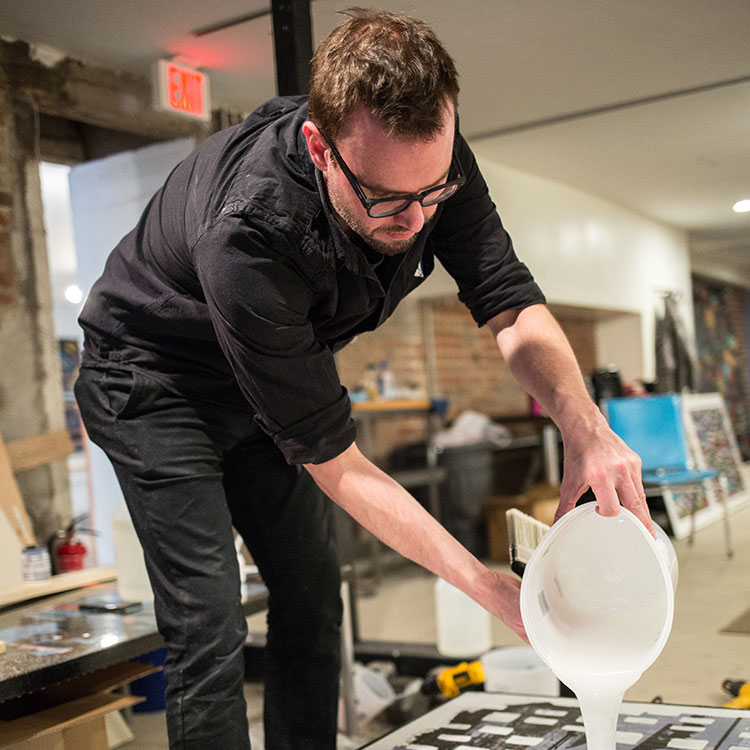 “I think for me, success is just getting to the point where I don’t have to worry about anything,” he says. “I can just paint every day and be completely financially secure and my daughter can do whatever she needs to do.”

Best earned a bachelor’s degree in Cinema and Fine Arts from Edinboro University in 2004, paving the way for gigs in film animation and script supervision on movies filmed in Pittsburgh. Great jobs, he says — but brutal. There would be six straight months of work and then … nothing. “Having a daughter, it just wasn’t consistent enough,” says the single dad. “So, at 26, I made the horrible decision to go full time into art.

“Creatively, it was better.”

For 10 years, he worked out of his Dawson Street studio in South Oakland, bartending full-time to support painting full-time. He never planned on opening a gallery, just a bigger studio, until he stumbled upon 2,000 square feet at 216 E. Seventh Ave.

Whenever he walks into that dream come true, it’s hard to get him out again. Inside, glossy originals and commissions live harmoniously alongside Veva’s artwork (propped against the window) and partially chewed rawhides (belonging to his boxer, Piper). “I’ve kinda been a Pittsburgh hermit. I just want to be in the studio painting. I try not to participate too heavily in the art world. Because it’s so much more about the scene and speculation. I think people take that stuff way too far.” 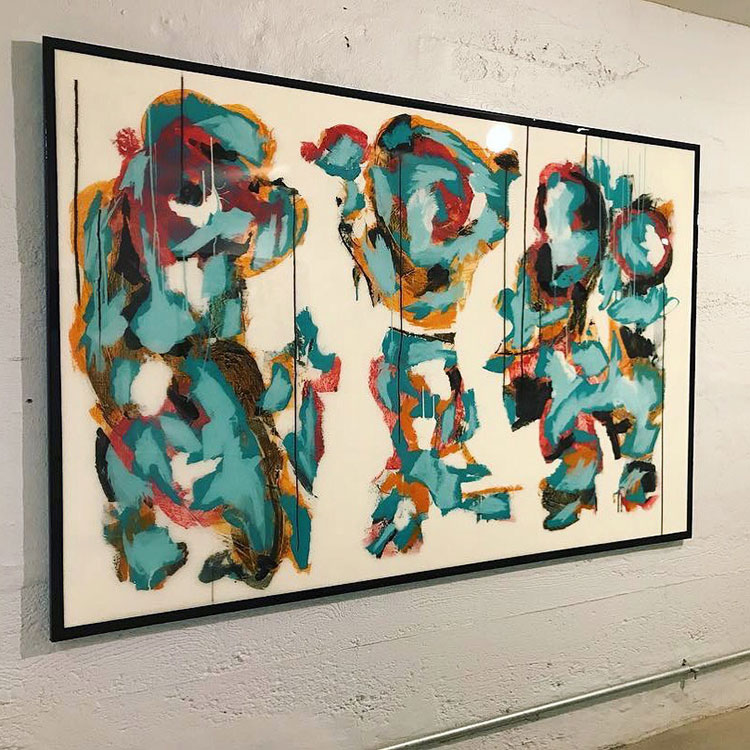 Everything he does is, in large part, a protest of everything about art that alienates people who don’t understand it. “The things that I run into in New York are just absurd — the way people value and evaluate art and what it means to be an artist. For many of the people I know that are artists, it’s so much more about creating the persona of an artist instead of just painting.”

He prefers a wood surface to canvas for the way its texture plays with the acrylics. He laughs over the fact that he’s colorblind. And he’s adamant about sharing his space with as many other artists as he can, showcasing their work on a rotating basis.

Most of his paintings, sculptures and furniture deal with the universe and God. Microscale vs. macroscale. Figuring out what all this means. Asking bigger questions. “I turned 40 this summer and had always painted darker paintings,” he says. “Then I made this whole series of white paintings. It was a chapter turn for me.”

These days, he’s more into minimalism. Building multiple surfaces and color combinations. Keeping what he finds interesting. Whiting away his paintings almost therapeutically — the less it has, the more powerful it becomes. “It’s almost like a math equation that begins to make sense.”

Recently, he launched a Patreon account, a membership platform artists use to generate sustainable income from subscribers or “patrons.” His idea is to allow collectors — especially novices — to make monthly contributions towards available artwork. “Whenever you’re an artist and finances are up and down you come up with some pretty interesting things,” he says.

“Art is a grueling, lifetime commitment.” 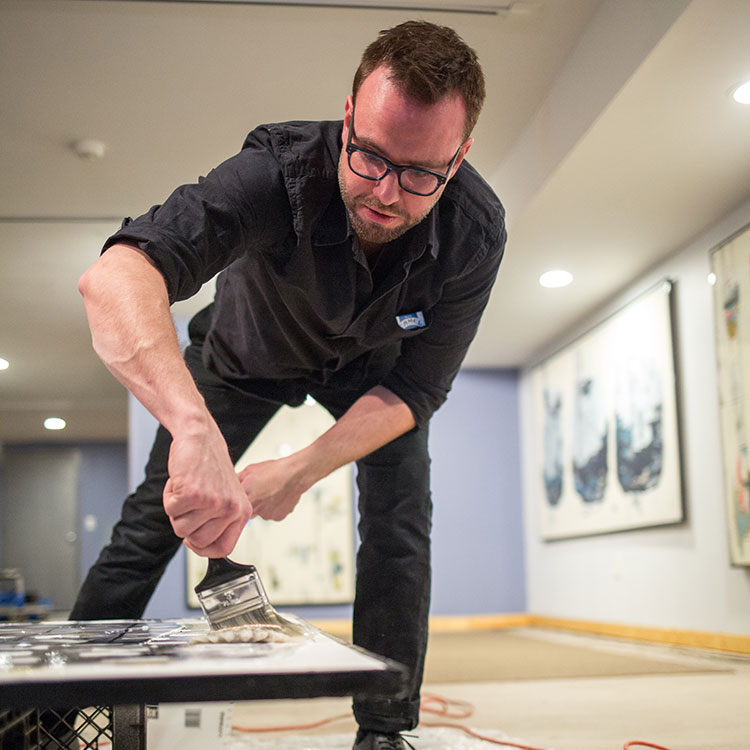 This article appears in the July 2018 issue of Pittsburgh Magazine.
Categories: Arts & Entertainment