Was Peyton Manning's near-perfect night a sign that the Steelers defense is finally too old? 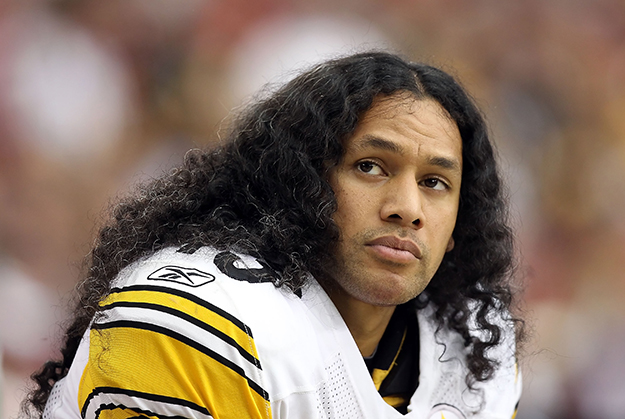 Woof. You know that snack-binge haze that starts to waft over your hangout spot about six hours and 64 Ford commercials into your Sunday Funday? Are you familiar with the funk of which I speak?

That moment when you’ve done so much Fantasy Football arithmetic and ate so many Blue Corn Chips and sat gravity-bong-level enraptured in a blear of five-yard outs for so long that you turn to talk to your buddy/spouse and they’ve turned into Dennis Leary and they’re browbeating you for not being able to pull a palette of felled redwood trees up the sheer cliff face of a smoldering hellscape with your pathetic non-Hemi-powered truck?

Yeah. That familiar moment of exhaustion happened at about 6:49 p.m. on Sunday. And then the Steelers played. As tired as we all were by then, no one looked more lethargic or disinterested than the Steelers’ defense. Blame it on the Mile High altitude or the absence of Ryan Clark and James Harrison (who was being so completely and monstrously and singularly himself on the sidelines, leering at Peyton Manning like he wanted to cast him in a really tragic reinterpretation of a Busta Rhymes video). Blame it on Ike Taylor or another one of your favorite talk radio jazz standards. But there was something decidedly different about the black-and-gold on Sunday night.

Facing a damaged quarterback who literally (according to the NBC announcers) begged his doctors not to let him return to professional football, a man who had not played a meaningful game in a year-and-a-half, and whose Kryptonite is press coverage and pressure, the Steelers defense backpedaled for 60 minutes. In Manning’s 28 passing plays, he was knocked down just three times.

When the Steelers did blitz, they did a terrible job of subterfuge. With a 13-7 lead in the third quarter, defensive coordinator Dick Lebeau went to the well one too many times, dialing up the same play for the third time in the game. Troy Polamalu cheated close to the line behind a blitzing Lawrence Timmons, leaving Ike Taylor alone on an island against his Lord and Savior, Demaryius Thomas. The island imploded in on itself and sank to the bottom of the ocean. Manning spied the ruse, audibled into a play action that Timmons and Polamalu believed in with every fiber of their bodies, and casually dumped the ball off to Thomas. Taylor gave his blocker a cuddle and Thomas scampered off unabated — a perfect episode recap of last season’s depressing finale to get fans all caught up for this season.

Outside of Larry Foote, who had seven tackles, a forced fumble and a sack, no one on the Steelers defense made an impression on the game. Well, except for Polamalu, who bizarrely kept faux-blitzing and sprinting back and forth to the line of scrimmage as if controlled by a child who does not take "Madden" nearly as seriously as you do (Mom, the meatloaf!)

All of this begs a really cliche question: Is this team old? Finally old?

After the Steelers lost their 2011 season opener to the Baltimore Ravens in rather embarrassing fashion, Warren Sapp, the NFL Network analyst and real-life YouTube Comment Weevil, declared that the black-and-gold’s vaunted defense was “old and slow.”

It was over, Sapp said.

But rumors of that particular defense’s demise turned out to be premature, as they finished the season No. 1 in the NFL in both yards and points allowed. Everyone, myself included, branded Sapp a reactionary numbnut. Which he is, of course.

And yet maybe Sapp really was ahead of the curve. Last season, the Steelers managed only 11 interceptions (24th in NFL) and 35 sacks (17th). The dynamism that fueled the double Super Bowl era seemed to be waning, replaced by a conservative and efficient defense, but one that was ultimately reckoned by an incapable Tim Tebow in the playoffs.

Call it what you want — Blitzburgh, the Steel Curtain — that aura of intimidation seems to have faded slightly since 2010. It’s striking that the two young stars who are supposed to carry on the franchise's long tradition of buccaneering, domineering linebacking into a new era, Lawrence Timmons and LaMarr Woodley, have been conspicuously toothless in recent months. Woodley began his career as a force of nature but was marred by injuries last season and Timmons, for all his talent, always seems to be outside the frame of the television (his solo tackles decreased from 96 in 2010 to 68 in 2011).

Timmons and Woodley combined for just six tackles on Sunday. While most Steelers fans will be concerned with what they did see on Sunday (Taylor being victimized once again, the dumbfounding amount of running plays out of the Shotgun and the sudden irrelevance of Casey Hampton), the real cause for concern might be what they didn’t see.

When Larry Foote is the most dynamic player on your television in a primetime game, something is certainly fishy. If the Steelers are to contend this season, someone from the younger generation of replacements needs make the leap, and fast.

Inevitably, the coordinators will shoulder most of the indignation and blogosphere spittle this week, but maybe it’s not the landlord that’s the problem here. Maybe it’s the foundation.