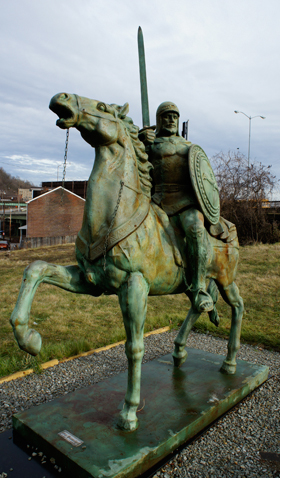 The statue is about 12 feet tall — closer to 14 at the tip of the sword — and it weighs about three tons. Made of cast iron, it has developed a nice pale green patina over the years. It was installed last October in an empty lot at the corner of Tustin and Seneca streets in the part of Uptown that’s sometimes called “Soho.”

Slightly kooky Sam Kiss, who retired after serving as Allegheny County’s Chief Architect, has been living in this neighborhood since 1979. Last year, Kiss saw this warrior in the lot of an antiques store in Duncansville, Pa., and fell in love at first sight.

“It reminded me of Europe,” says Kiss, a Belgian by birth. “My girlfriend was looking at something 18 inches high, and I was struck by something 14 feet high!” He took advantage of the shop’s layaway plan and eventually had the artwork trucked here on a flatbed. “I could’ve gone to Europe for the amount I spent on it.” I learned a lot from Kiss:

He’s dubbed the statue “Sir Samelot” and thinks of it not only as a neighborhood guardian, but also as a menacing reminder to folks downtown on Grant Street to be careful with their politics.

Neither Kiss nor the man at the antiques store can offer any guess as to the statue’s provenance. Where did it come from? Why was it created? Does it matter?

Kiss thinks that the markings on the knight’s shield might be able to tell us something. Who knows heraldry these days? “I think of him as a Hun,” he says.

In his first few months as a Pittsburgher, Sir Samelot has been decorated several times: with pumpkins and a Scream mask for Halloween; with a Steelers shield; with an extended sword lancing three turkeys for Thanksgiving; and with a Santa hat and sleigh for Christmas.

Depending on the size of your vehicle, you can see some of Sir Samelot from the Boulevard of the Allies, if you know where to look. (It’s easiest from the outbound side.)

This article appears in the March 2012 issue of Pittsburgh Magazine.
Categories: Rick Sebak