The Front Porch Welcomes You Into This Mt. Lebanon Home 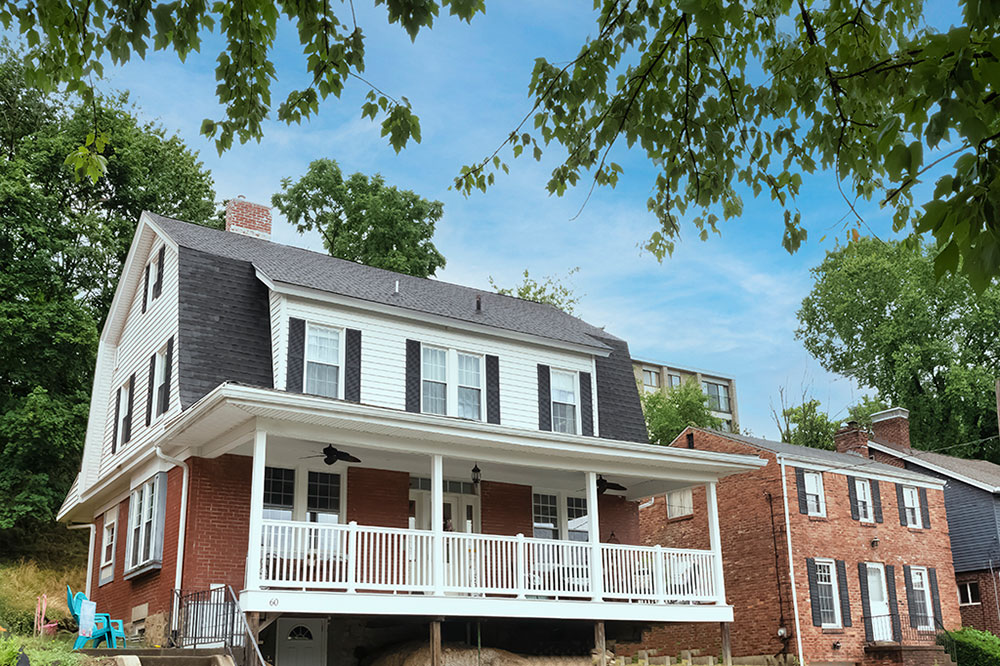 After meeting and marrying in Philadelphia, Brittany and Stephen Glenn set their sights on moving back to Pittsburgh a decade ago — but it didn’t come easily. The pair were living across the state when they fell in love with 60 Cedar Blvd., a five-bedroom, two-bathroom home in Mt. Lebanon.

“We purchased our home in April 2012,” Brittany says. “Our careers didn’t allow us to move right away, so we had a two-and-a-half year plan to rent it out before we could make the jump.” 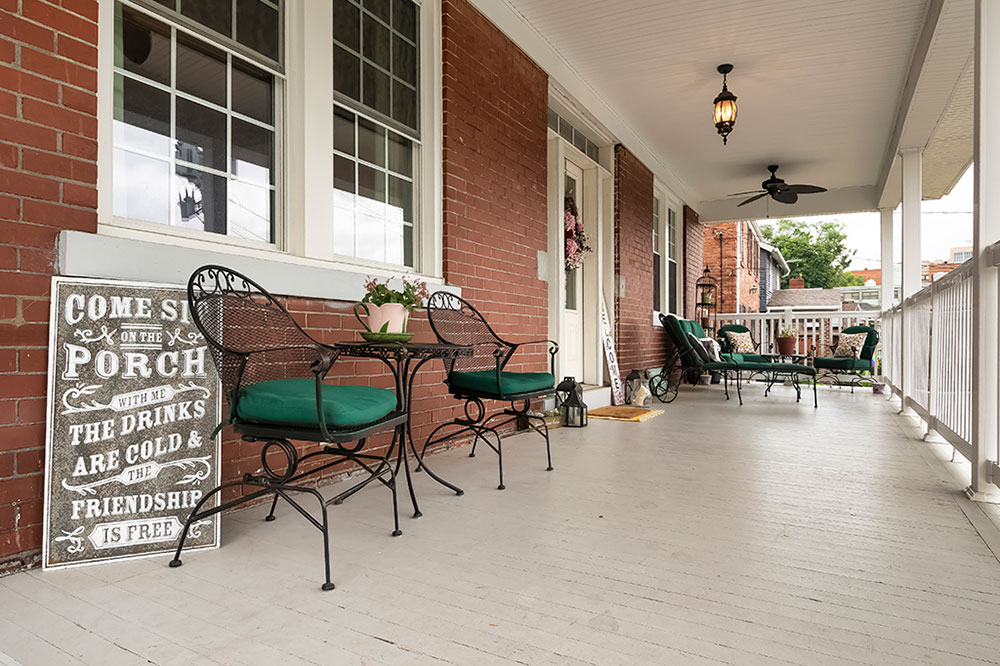 Originally from Mt. Lebanon, Brittany says she wanted to be closer to family after years of living away. The home at Cedar Boulevard was one of two options she and Stephen toured in one weekend after driving in from Philadelphia. As it turned out, luck was on their side.

“We wanted 60 Cedar Blvd.,” Brittany says. “We signed the paperwork and the same day we got a call that someone just signed on our house in Philadelphia.”

Once they moved into the home, the couple put their DIY skills to work, completing a super renovation. Work is now leading them out of the state, so they have listed their home for $398,900 (MLS#1565748, Vera Purcell, Howard Hanna Real Estate, howardhanna.com, 412.916.4488). It is open by appointment.

The charming renovations begin with the welcoming front porch, which received new ceiling and deck paint, lighting and a pair of ceiling fans. Once inside, the home has a warm farmhouse vibe combined with contemporary touches. 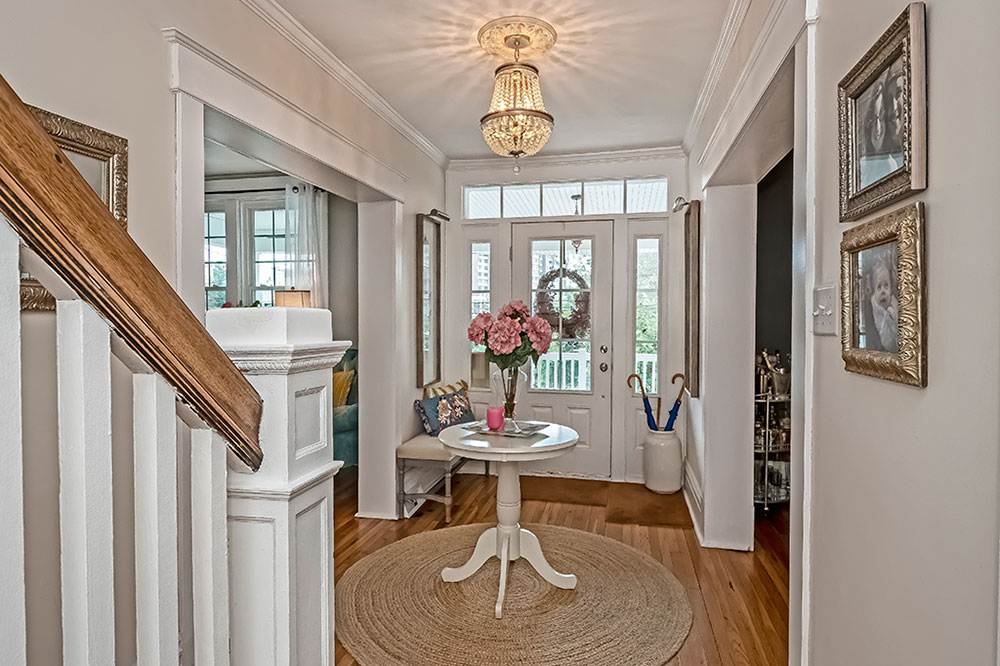 A generous entry features updated lighting and new hardwood floors. Behind the walls are a plethora of unseen updates.

“There was knob and tube wiring throughout the house, and we had that pulled out and replaced with all new electric,” Brittany says. “We installed all new central air and all of the walls were replastered after the electric was replaced.”

The Dutch Colonial-style home has a traditional layout. To the right, the 24-by-13-square-foot living room is painted a light gray that highlights the white fireplace façade. Several large windows let in light, while pops of color enhance the neutral decorating scheme. 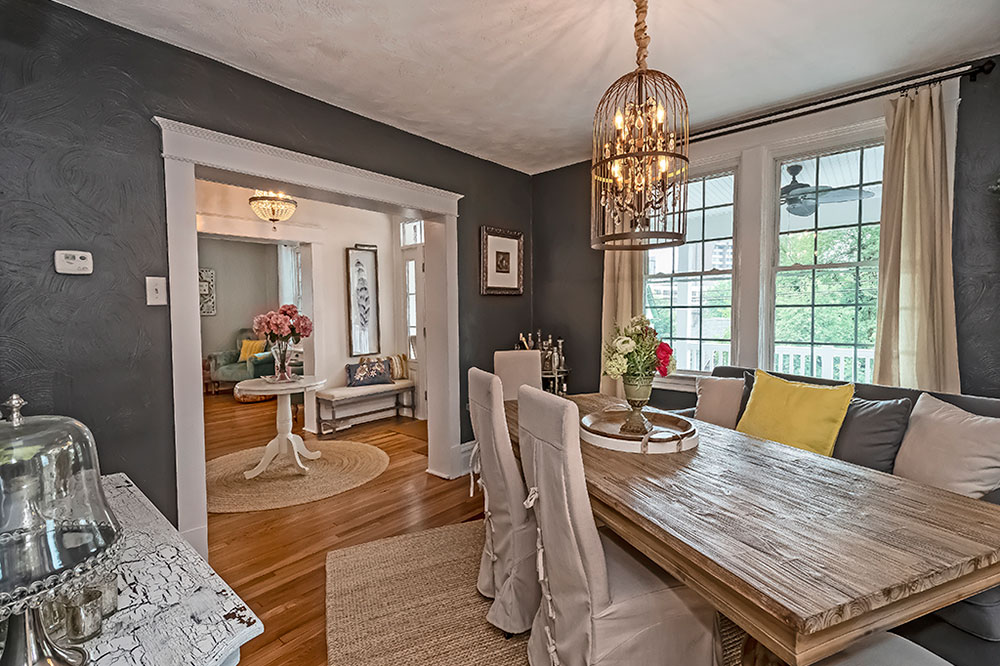 Across the hall, soft black walls in a satin finish amp up the drama in the dining room.

“I painted it Peppercorn [by Sherwin Williams]. I love it,” Brittany says. “I based the dining room on the painting that I have hanging in there.”

Brittany also has a love for chandeliers and installed a combination of new and vintage pieces throughout the home. This includes a long birdcage-style fixture in the dining room and a crystal flush mount in the entry. While Brittany says she usually takes her lighting with her when she moves, this time she’s leaving the fixtures behind for the next owners.

“There is a beautiful vintage rose chandelier in my daughter’s bedroom,” she says. “Other chandeliers I found at yard sales. I had all of them rewired, then I painted them and found new lampshades.” 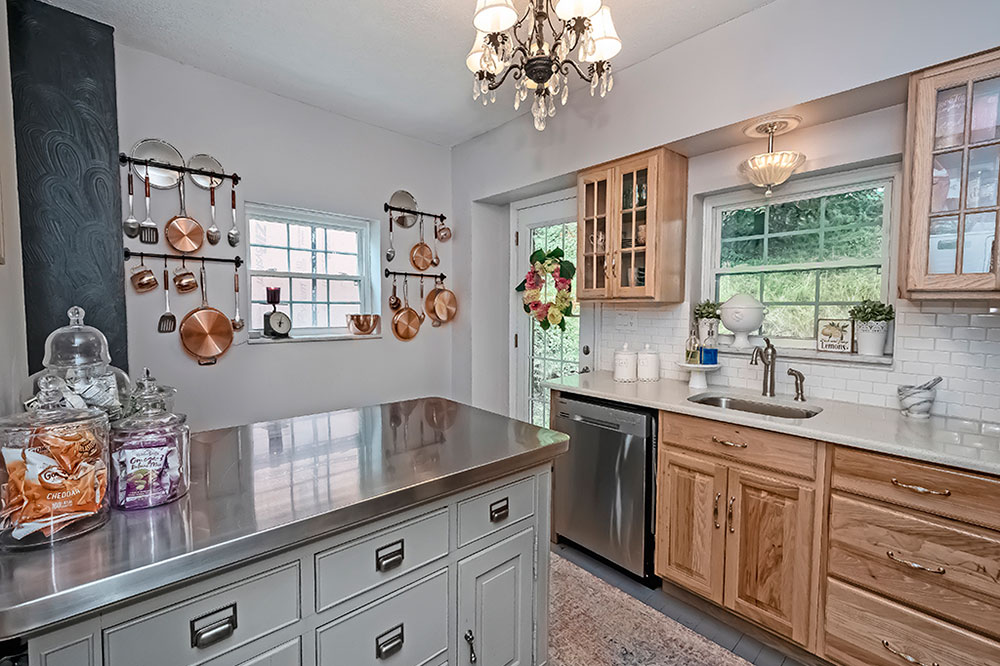 In the light gray kitchen, painted Aria by PPG Paints, the couple kept the walnut cabinets but tore out the Spanish tile countertops, replacing them with white quartz. To add more storage, Stephen built a small pantry that runs along the back wall.

“I also installed racks to hang the copper pots on the wall; it plays with the light in that room,” Brittany adds.

Upstairs, the couple made a super-smart upgrade when they took a little-used back hallway and linen closet and turned it into an ensuite bathroom for the primary bedroom.

“My husband and I completely gutted it,” Brittany says. “He is really handy; he designed the entire space and layout, and I picked the finishes.” 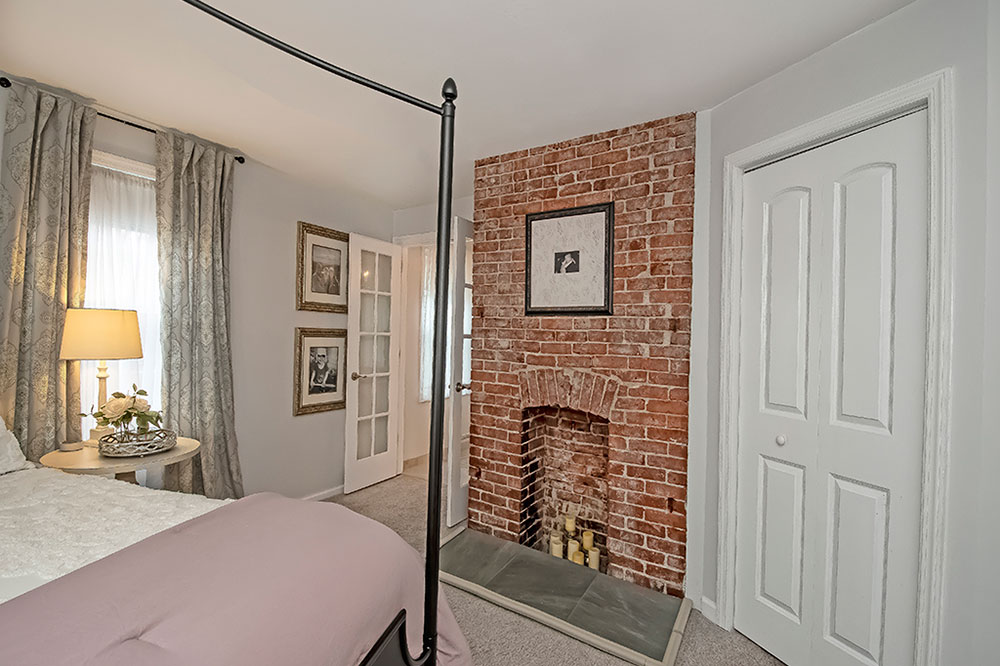 The new primary bedroom space measures 14-by-14 square feet and has an exposed brick fireplace with a tile hearth. French doors lead to the bathroom, where there is a large tile shower, glass chandelier, and a double vanity with quartz top sinks. There’s also a clawfoot tub the couple scored online.

“We drove to Central PA to pick it up,” Brittany recalls. “An elderly couple bought it new and they found it too deep for them to use. It’s not cast iron so we were able to move it ourselves.”

The couple also squeezed a laundry space into the primary bathroom from its previous location in the basement. 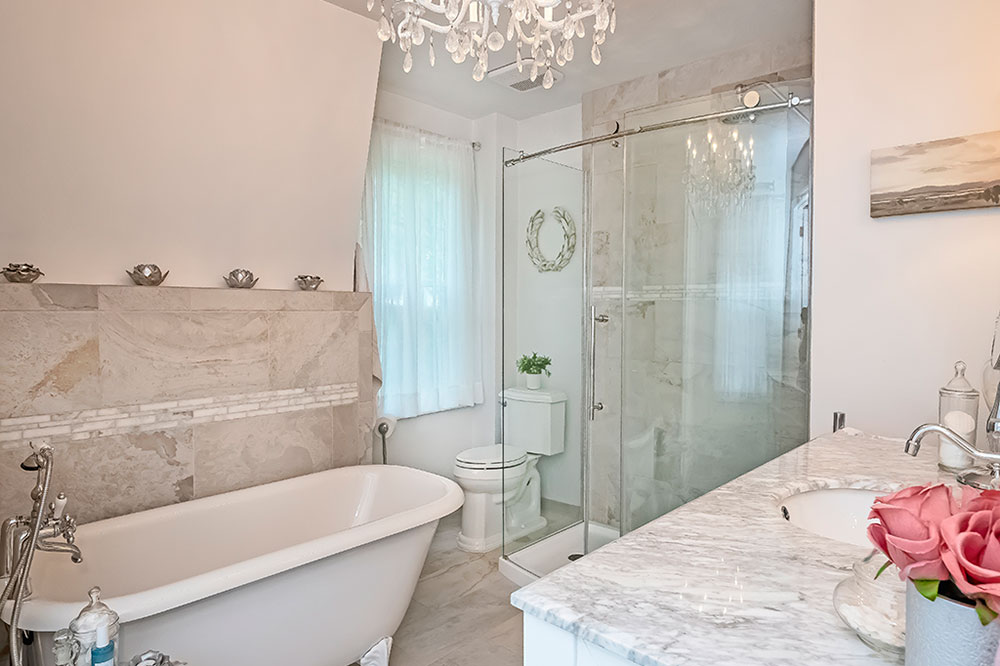 Two other bedrooms on the second level measure 14-by-12 and 14-by-10 square feet, respectively. One room is used as a bedroom for the couple’s daughter; the other is Brittany’s closet.

“I always wanted a walk-in closet so I did it there,” she says. 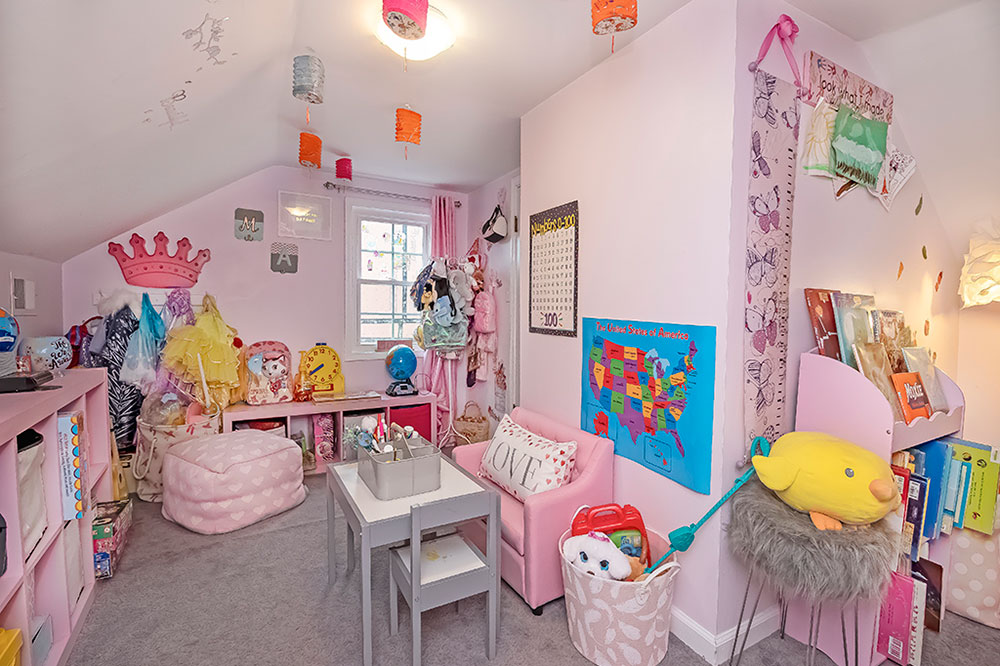 On the third floor are two more bedrooms. One is used as a playroom and features soft pink walls. As a tribute to their daughter’s favorite movie, “Tangled,” the ceiling is decorated with floating lantern lights similar to the ones loved by Rapunzel.

“I got them off of Mt. Lebanon Freebo and put them up,” Brittany says. “There is a whole scene where they let lanterns go in the sky.”

Used for lounging as well as working, the second bedroom is roomy enough for two daybeds and a home office. Surrounded by a small backyard, the house is located just a few blocks from Mt. Lebanon’s Washington Road business district, which is chock full of restaurants and retail stores.