The Fishing Tournament Where Everyone Catches Something

The annual Ross Township Fishing Tournament, now in its 22nd year, draws hundreds of anglers of all ages. 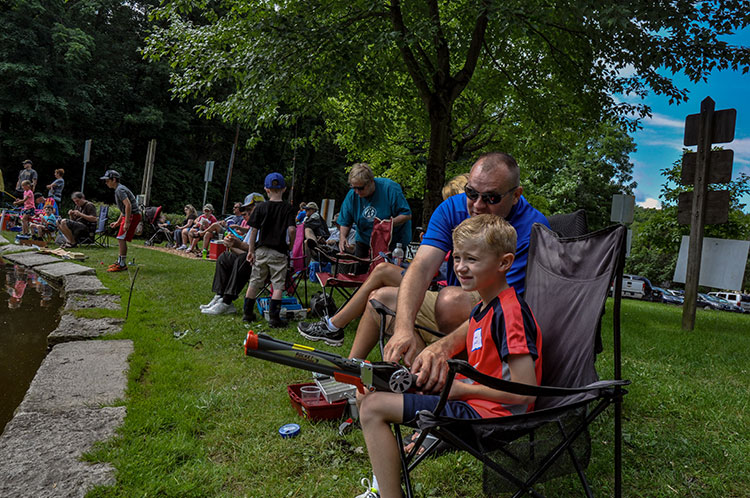 Fishing, especially to a 5-year-old, can be an uneasy experience. Attaching a slimy, squirmy piece of live bait to a hook, casting it into the water without entangling the line in a tree and then knowing what to do when the fish bite — not to mention the actual capturing of a creature clearly uninterested in being caught — is a lot to ask of someone whose previous wildlife experience might be limited to spying deer through a car window.

The guiding hand of a patient mentor can go a long way toward making a child’s first fishing experience a good one. At Ross Township’s annual Fishing Tournament, there’s no shortage of fish or helping hands to reel them in — and yet it’s much more than a day by the pond. 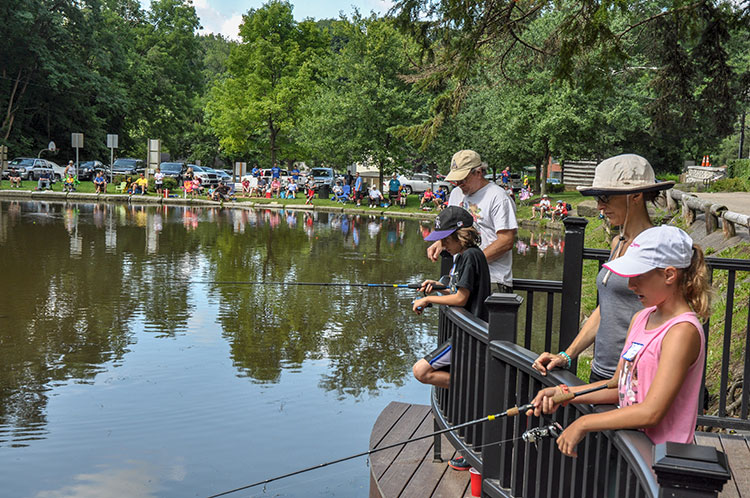 Twenty-two years ago, Ross Township Police officer Frank Zotter and friend Jerry Mazur volunteered at a fishing tournament at a private pond near Zelienople. The experience inspired them to launch a kids-only fishing tournament, located at the pond at Evergreen Park. The first year, 35 to 40 children fished during the one-day event.

“The main focus of this has always been to bring police together with the community, and it has,” says former Ross commissioner Lana Mazur, a longtime volunteer organizer of the event. 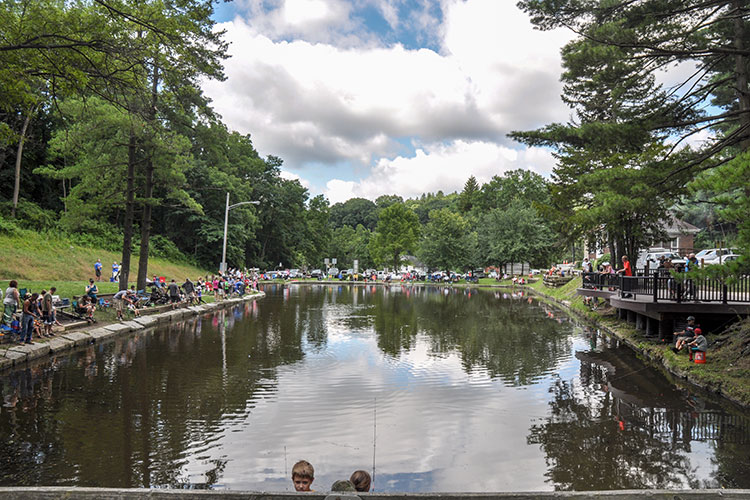 Within a few years, the free tourney expanded to two days; it now includes children, teenagers, adults, senior citizens and those with special needs. More than 200 people fished in last year’s tournament, which is typically held the second weekend of July. The park was packed not only with those fishing, but also with family members, friends and volunteers from the police department who man the bait and measuring stations and help those new to the sport.

“We get the lines and hooks out of the trees when a cast goes off course; we help them restring their rods if need be,” says Ross Township officer Al Elway. “It’s very interactive and very friendly.”

Elway believes the volunteers get as much out of the experience as the kids. 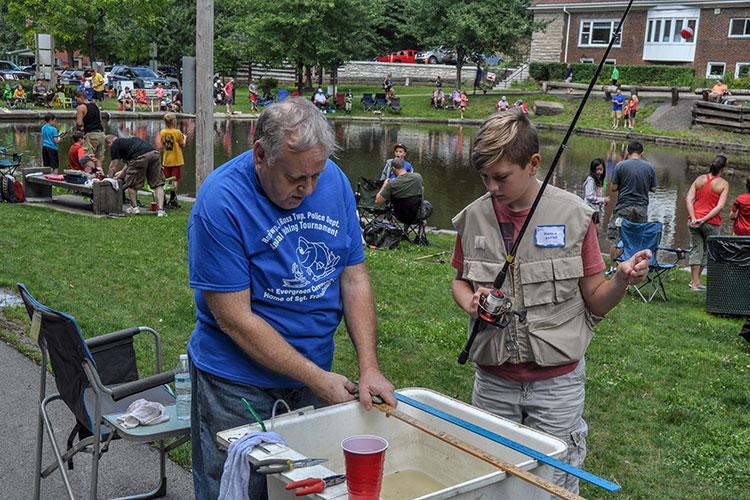 “When we take the fish off the hook, we drop it in a little washtub of water before taking it back to the pond,” Elway explains. “One kid, 6 or 7 years old, kept trying to chase the little bass with his hand around the tub. So I showed him how to slowly come in front of the fish and grab it with his hand. The first time he did it, his eyes got big and he had a huge smile … Those are the moments that I like.”

Another challenge to rookie anglers, particularly the younger ones, is boredom. What if there aren’t enough fish? What if they’re not biting?

To guarantee a target-rich environment, volunteers stock the pond, and fishing is prohibited for a week before the tournament.

“You put 400 fish in a small pond and you don’t let anybody fish for five days before the tournament and you’ll catch fish,” says Elway. 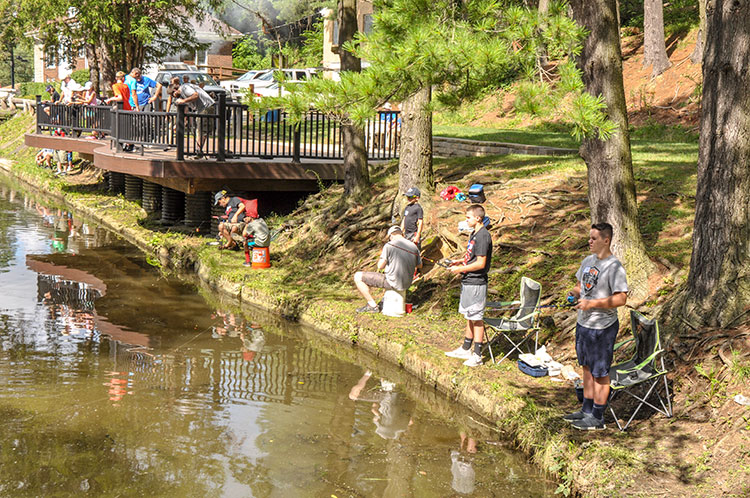 The first day of the tournament is for children ages 14 and younger. The second day is reserved for older teens, adults, senior citizens and anyone with special needs. Prizes are awarded in seven age groups. Each fish that is caught, no matter its size, is measured by length before being returned to the pond. First-, second- and third-place trophies are handed out to those who catch the largest cumulative amount of fish and the “lunker” — the biggest individual fish. Non-trophy winners don’t leave empty-handed.

“Everybody walks away with a prize. They either get a tackle box or a T-shirt or some sort of prize,” says Mazur.

As the event grew in popularity, local restaurants and businesses began donating food, drinks and prizes. The township funds half of the cost, including stocking the pond, which is named in honor of Zotter, now a retired Ross Police sergeant. The fish are sourced from a local hatchery. 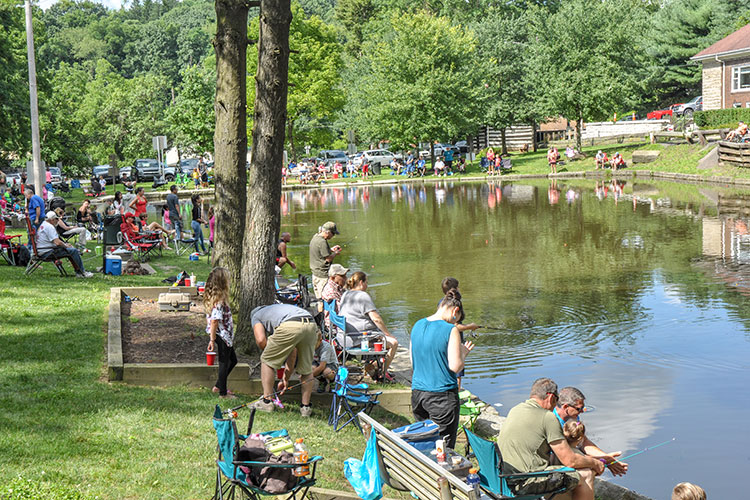 “You have so many people that come together to make this work — people who donate food and drinks, the volunteers from the police department, the guy in Zelienople who lets us catch his fish and bring them down here. It’s a big group of people that care about their community and want to see the kids take advantage of it, says Elway.

“We just try to pull it together and make it work — and it’s done pretty good so far.”

The audience is as entertained as the kids.

“The one-on-one interaction is what makes this event so special. We love the energy because the kids are excited, they’re fishing and catching fish and getting it measured and then rushing back to their spot by the pond,” says Mazur. “The kids cheer each other on. It’s an awesome experience to watch.”