The Favorite Son of Indiana, Pa. 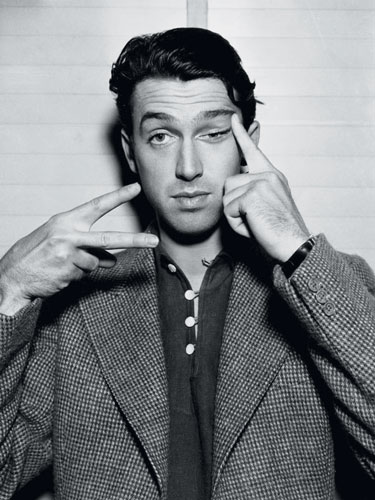 The actor Jimmy Stewart could be considered a skinny cousin to Santa Claus. They’re both legendary good guys — and if you forget about either of them for most of the year, chances are, you will be reminded of them in December. Stewart traditionally shows up in TV broadcasts of “It’s A Wonderful Life,” a beloved movie that celebrates its 70th anniversary this year.

Unlike Santa with his North Pole origins, however, James Stewart was born up the road in Indiana, Pa., where a museum now documents his careers as a Hollywood actor and an Army Air Force pilot during World War II. There’s an impressive, 9-foot-tall bronze statue of Stewart next door to the museum in front of the Indiana County Courthouse, a good indication of how much his hometown reveres him as a favorite son.

Since 2009, you’ll also hear Jimmy’s voice at several street corners in the borough, telling you when the walk signal is on.
(Technically, the voice is that of famous impressionist Rich Little, but the Stewart-esque admonition to “take your time” is a nice touch.)

Born James Maitland Stewart on May 20, 1908, the movie star was the son of Elizabeth and Alexander Stewart. Jimmy’s grandfather established the J.M. Stewart & Co. Hardware Store (also known as the “Big Warehouse”) on Philadelphia Street in downtown Indiana; Jimmy’s father ran that same three-storied store until his death in 1961.

While studying architecture at Princeton University, Stewart started performing at magic shows and theatrical productions, played accordion and met Josh Logan, who invited him to spend a summer on Cape Cod with a theatrical group called the University Players.

Stewart went on to New York City and began getting parts in Broadway shows, eventually getting noticed by talent scouts. In the mid-1930s, he got a screen test that led to his signing on with MGM as a contract player in the old studio system. From 1935 until 1939, he made 29 movies including “Mr. Smith Goes To Washington,” “Destry Rides Again” and “The Philadelphia Story,” for which he won the Academy Award for Best Actor in 1941. (Jimmy sent his Oscar statue to his father, who famously displayed it in the front window of the hardware store for many years.)

In 1941, Jimmy Stewart enlisted in the Army. As a pilot in the Air Corps, he flew at least 20 missions over cities in Germany in a B-24 bomber; he was awarded the Distinguished Flying Cross as well as the French Croix de Guerre for his efforts. He stayed in the Air Force Reserve for many years, rising to the rank of Brigadier General.

After the war, Stewart wasn’t sure if he’d go back to acting or not — but Frank Capra had a role for him, and he returned to Hollywood to make “It’s A Wonderful Life.” He often confessed it was his favorite of all his movies. Stewart would continue acting in his inimitable style for many years, making more westerns, the unusual classic “Harvey,” and several Hitchcock thrillers, including “Rear Window” and “Vertigo.” At the Jimmy Stewart Museum, the docents will tell you that he made a total of 81 major motion pictures.

Jimmy Stewart made his last visit to Indiana in May 1983 for his 75th birthday — when the statue was unveiled (even though the final bronze casting was not yet finished). He died in 1997 at age 89 at his home in Beverly Hills. The front door from that house, as well as many photos taken there, are on display at the museum in Indiana.

This article appears in the December 2016 issue of Pittsburgh Magazine.
Categories: From the Magazine, Hot Reads, Rick Sebak