The Curse of First Looms Over Pirates' Draft Pick

Pat Lackey is veteran blogger and a frequent guest of Pulling No Punches. Today, he digs deep into the Pirates’ curse of picking first. 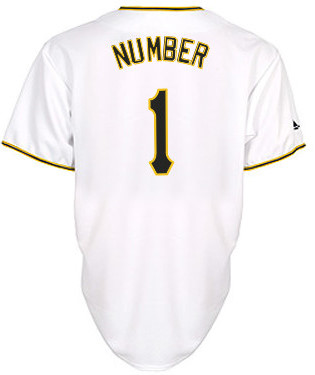 Major League Baseball ran its June amateur draft for 22 years before the Pirates had a chance to pick first. Since "earning" the first pick in 1986, though, the Pirates have picked first in the draft three times and will pick first again on June 6. Before we get into what the franchise could or should do with this year’s first pick, let’s turn back the clock to look at their other three picks in the No. 1 slot and see if history can teach us any lessons.

In 1986, the Pirates were coming off a season nearly as bad as the one they suffered last year. They went 57-104 in 1985 with a roster almost completely devoid of talent. They needed a big pick at the top of the ’86 draft to get the franchise back on pace. Luckily for the Pirates, there was an All-American third baseman available; a guy that flat-out destroyed his competition in both his sophomore and junior years, batting over .360 in both seasons. A clear-cut number one prospect. Jeff King.

King went on to have a respectable career with the Pirates and Royals, even if he liked baseball about as much as I like having teeth pulled. Was he the best pick at the top of the draft? It’s easy to say he wasn’t in hindsight. According to Baseball Reference, King was worth about 15 wins-over-replacement (that is, his value compared to a typical Triple-A call-up at his position) over the course of his career with the Pirates and Royals. The second pick in the draft, Greg Swindell, was worth 27.5. The third pick, Matt Williams, was worth 43.9. The fourth pick was Kevin Brown who was worth a whopping 64 wins above replacement. The sixth pick was Gary Sheffield (63.3).

Ten years later, the Pirates got another crack at the top pick. They were abysmal in the post-lockout 1995 season (they were on pace for 99 losses over a full 162 game season) and were mired in what already seemed like a long stretch of losing in the post-Bonds era. Luckily for them, there was an ace-in-the-making available; a pitcher that dominated the ACC, that struck out almost ten times as many hitters as he walked his junior year. The sort of guy that would fly through the minors and immediately help build a rotation for the future. Kris Benson.

Almost immediately, there were warning signs from Benson. He zipped through Advanced-A in 1997 but struggled with control and home runs in Double-A. His strikeout rate dropped pretty seriously in Triple-A in 1998, and he looked pretty hittable. Baseball America dropped him from their 8th-best prospect in 1998 to only the 57th-best in 1999, but the Pirates put him on their Opening Day roster that season anyway. Benson responded by starting out his career strongly in 1999 (he was 11-14 with a 4.07 ERA and a 1.67 K/BB ratio) and putting up what would turn out to be a career year in 2000 (10-12, 3.85 ERA, a career best 7.6 strikeouts per nine innings that allowed for a 2.14 K/BB ratio). Unfortunatley, the heavy workload early in his career resulted in Tommy John surgery early in the 2001 season and Benson was never the same again.

When Benson retired in January, Yahoo! sports blog Big League Stew proclaimed him "the true definition of average," but even in hindsight it’s hard to say that Benson was a bad pick at no. 1. Only a few players in the first round of that draft went on to better careers than his; Mark Kotsay (no. 9),  Eric Chavez (10), Eric Milton (20), Jake Westbrook (21), and Gil Meche (22) are the only first rounders from 1996 with a career WAR better than Benson’s and really, only Chavez’s career stands out above the rest. Benson seemed like the real deal, but he turned out to be a college pitcher with arm problems.

The Pirates’ third crack at the top pick came with a much shorter wait. The Bucs’ bombed out in PNC Park’s inaugural season, losing 100 times in 2001. That got them the top pick again in 2002. That was Dave Littlefield’s first pick as Pirates’ general manager, and Littlefield was determined to dig out of predecessor Cam Bonifay’s mess as quickly as possible. As a result, he eschewed the two players widely regarded to be the best talent in the 2002 draft, toolsy high school shortstop BJ Upton and high school flame-thrower Scott Kazmir, for what he thought was a sure thing: Ball State’s Bryan Bullington.

Bullington went on to put up decent numbers in the minors and move through the system fairly quickly, getting a cup of coffee with the Bucs in 2005. And then he blew his elbow out, missed all of 2006, and was an ex-Pirate by the middle of the 2008 season. He made one fantastic start with the Kansas City Royals last year, and is now a member of the Hiroshima Carp’s rotation. This pick is easier to pick apart than the Benson pick; after Bullington was drafted, various other teams picked Upton, Zack Greinke, Prince Fielder, Kazmir, Nick Swisher, and Cole Hamels in the first 17 picks, with Matt Cain going later in the first round. The pick is remembered by Pirates fans as an unmitigated disaster, because it was.

So is there a lesson we can take from the Pirates’ history with the first overall pick in the draft? Yes, and it might be this: no matter what happens, the first overall pick is only one player. In the entire history of MLB’s draft, there have been three sure-fire Hall of Famers taken first overall (Ken Griffey Jr. in 1987, Chipper Jones in 1990, and Alex Rodriguez in 1993, with the jury obviously still out on everyone picked since 1999 or so) and there have been far more busts than All-Stars. Jeff King, for all of his mediocrity, only needed to be a bit player for the Pirates between 1990 and 1992 for the team to contend, because Syd Thrift’s front office had stockpiled a ton of talent that made the Pirates one of baseball’s best teams for those three years.

Maybe one of those teams wins a World Series with Greg Swindell or Gary Sheffield instead of King and maybe they don’t, but a good front office was able to overcome a not-so-great pick at no. 1.

On the other hand, were Benson’s Pirates between 1998 and 2003 one good player away from contending? BJ Upton would look great in a Pirates uniform now, but he wouldn’t have even made an impact until 2007 or 2008; right around the time Littlefield was being fired and when Bullington’s Pirates career was already winding down.

As much as Pirates fans want the first overall pick to be a home run, it’s often much more complicated than that. Good front offices succeed, even if they don’t make great picks at the top of the draft, while bad front offices ultimately fail no matter what happens at the top of the draft. I’m not denying that this June’s pick is a momentous decision for the Pirates given the state of the team, their farm system, and the status of their current rebuilding plan. But in the end it’s still just one puzzle piece.

You can read more of Lackey’s Pirates analysis on Where Have You Gone Andy Van Slyke?