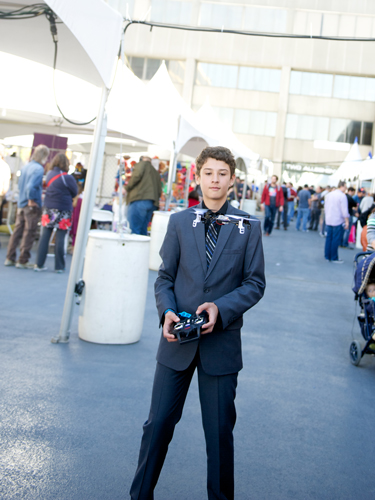 “Years ago, my parents brought home a cheap radio they bought at a fair, so I took it apart with a screwdriver to see what made it work,” says Gomez-Faulk, an aspiring fighter pilot and ninth grader at Pittsburgh Capa 6-12.

Gomez-Faulk started watching ﻿YouTube﻿ tutorials on building items that interested him. He buys “sophisticated, cheap parts” from internet suppliers to build things such as a racing quadcopter and a 3D printer, which he displayed at Maker Faire Pittsburgh, an event showcasing creative and inventive makers.

The first large-scale national Faire held in Pittsburgh featured technology, art, craft,electronics, and more, with 200 exhibits displaying everything from fashion and robotics to game systems and rockets. It was a pivotal event in Pittsburgh as the maker movement continues to gain momentum.

The Children’s Museum opened MAKESHOP® in 2011 as a space for children and families to make, play and design. Werner said she plans to take it even further. Partnered with Kickstarter, an online funding platform, the museum’s goal is to put maker spaces in every classroom in the United States. They’ve started locally with 10 schools participating in the pilot stage of Kickstarting Making in Schools project. To date, seven schools have raised more than $109,000 to develop their maker spaces and to further professional development for teachers.

“The educational maker movement focuses on teaching basic concepts, 21st-century skills, problem-solving, creativity and persistence,” says Werner. “That’s what making is all about.”

To learn more, check out WQED’s documentary on four student makers, including Ceu Gomez-Faulk, at 8 p.m. on Jan. 21.