The Bucco Bandwagon is Leaving the Station

When the going gets tough, the tough Buc up. 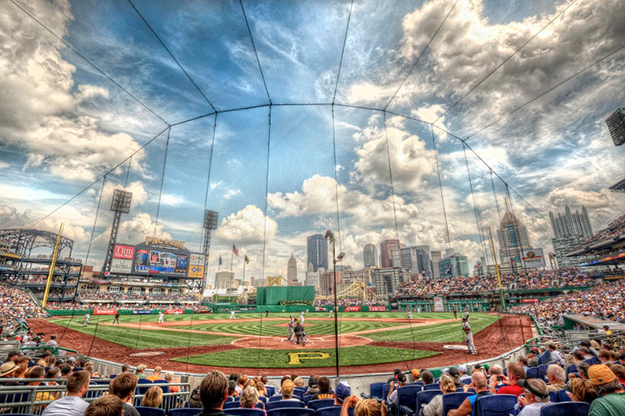 I am the ruler of the bandwagon. The queen. The most-high-muckety-muck.

And most importantly … the driver.

Each year I use my powers of persuasion, my charm and my promises of free margaritas to lure men and women alike onto my Pirates bandwagon — promising them that THIS (this year right here), THIS one is the year. This is the year the leaks in the Pirates' ship are plugged, the course corrected, the jib unfurled. I don't know a thing about sailing a Pirate vessel, but unfurled jibs sound about right.

And this year, more than any other, my bandwagon is quite full. I had to get bigger, stronger horses to pull the load and the fans are jammed in there like a child tried to shove 18 crayons into a 16-crayon box.

We were making great progress, tearing through the city shouting, "Let's go, Bucs!" at passing Ducky Tour boaters whose feeble quacks couldn't be heard over our roaring din. 15 games over .500 ball was euphoric. Watching the Wildcard race didn't turn us vomitous — as it did in years past. Caring about games — MEANINGFUL GAMES — in early-August was foreign to us because usually by that time we'd be saying, "Thank God for Steelers football."

Usually by late August, I'd be left on the bandwagon alone, surrounded by litter and hopelessness. And rather than clean the mess up, which I just naturally avoid at all costs, I would light the bandwagon — debris and all — on fire and roll it into the Mon.

But not this year. This was THE year, and my flourishing bandwagon was the proof.

Then it got bumpy. Real bumpy. Puke bags were handed out to all remaining bandwagoners. Being the driver, I announced, "We're experiencing some unexpected turbulence and we're not sure when it will let up. You are advised to put lids on your margaritas and buckle up."

Some buckled up. Some tucked and rolled without a thought for spilled margaritas.

Now here we are in what can only be described as a slump. We've fallen to third place in the standings and are only 10 games over .500. We've lost six of our last ten and I can't look at the Wildcard standings until I locate my own puke bag.

And everyone wants to know if I'm scared. If I'm okay. If I'm at all concerned that the bandwagon's wheels seem to be THIS CLOSE to falling off completely.

I'm convinced they'll pull out of this. I feel a ten-game win streak is just around the bend, right up ahead, and that's the direction I'm driving the wagon. This is the year that we'll have a winning season, if not make the playoffs.

Maybe I'm not 100-percent fine, but I'll be damned if I'm jumping ship anytime soon. I'm staying the course. I'm remaining a fan through this slump. I hope you will too.

I think I need a hug from Zack Morris.

This article appears in the August 2012 issue of PittGirl.
Categories: PittGirl