The Bigger-Than-Ever Deutschtown Music Festival Takes Over This Weekend

The mammoth, annual celebration of local music expands to two days for the first time this Friday and Saturday. 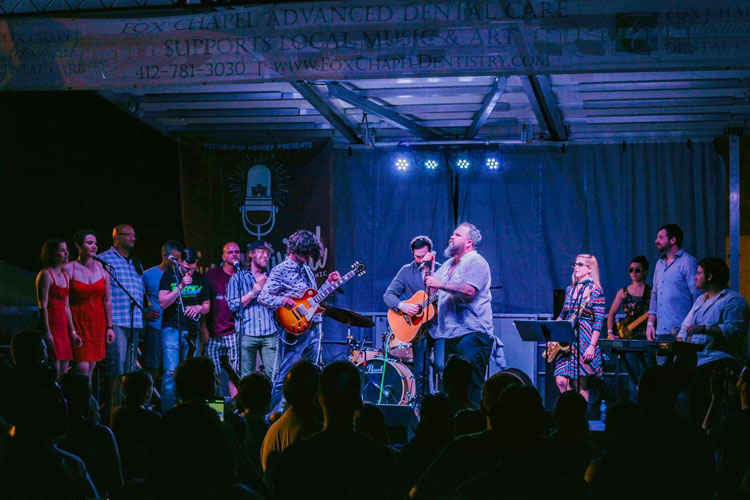 The streets and businesses of Pittsburgh’s historic Deutschtown will be lined with food, drink and music Friday and Saturday for the fourth annual Deutschtown Music Festival. For the first time, the festival is set to span two days.

This year’s event will feature more than 185 bands performing across 22 stages, both outdoors and inside of the neighborhood’s restaurants and businesses. More than 20 food vendors and a beer garden — which will be next to the Main Stage, between Middle and Foreland streets — will be available.

For The Garment District’s Jennifer Baron, the DMF’s historic North Side location creates a connection between the musicians and the local culture.

“The collective energy and excitement of a large-scale public happening such as a festival — especially one that has outdoor programming and is thoughtfully curated and site-specific — is such a crucial part of any city’s cultural scene and artistic identity,” Baron says.

Baron believes that all large festivals provide some level of “controlled chaos,” but DMF is unique.

“I think that the DMF is a massive and ambitious undertaking, and it is also unique in that it occupies a wide variety of public spaces, not simply conventional music venues, as well as many distinct pockets of Deutschtown,” Baron says. The Garment District is scheduled to appear at the festival for the first time on Saturday at James Street Gastropub and Speakeasy.

Members of The Commonheart — who performed on the DMF main stage last year — witnessed firsthand the effects of playing at a large local festival.

“I can only speak for our band, but we have seen residual effects of a great DMF set ever since last year. People tell us often that they’ve been following us since they first saw us at DMF,” drummer Shawn McGregor says.

McGregor adds that not only do local bands have the opportunity for exposure, but it’s also a chance for the musicians of Pittsburgh to appreciate the talent that exists within the city limits.

Clinton Clegg — band leader of The Commonheart — emphasized that DMF’s success goes beyond the artists themselves.

“DMF and its staff put so much work and effort into this event. It’s great to see all the organizers and volunteers soak in their accomplishment,” Clegg says. “I’m confident it will be another great turnout and we will enjoy it all day and all night.”

Like most things, the festival scene is only what the community makes of it. According to McGregor, Pittsburghers make the most of it.

“I would also add that the people of Pittsburgh love festivals," Commonheart member Jess Hohman says. "They love to get out and enjoy their community together, and by and large, Pittsburghers realize how lucky we are to have so many free festivals — and are very appreciative of that.”

The Commonheart will perform on Saturday night at the (21-and-over) Elks Lodge stage.

Friday’s festivities will have seven stages, including the outdoor Park Stage at Allegheny Commons East featuring PATTON and Pet Clinic. James Street Gastropub will host music on three stages — the Ballroom, the Speakeasy and the restaurant — during both nights of DMF.

Saturday’s headliners on the Main Stage include Gene the Werewolf and the Bastard Bearded Irishmen.

A full schedule can be found here.