The Beat: Power & the Passion

The electro-popsters of Passion Pit will make some noise Nov. 6 at Stage AE. 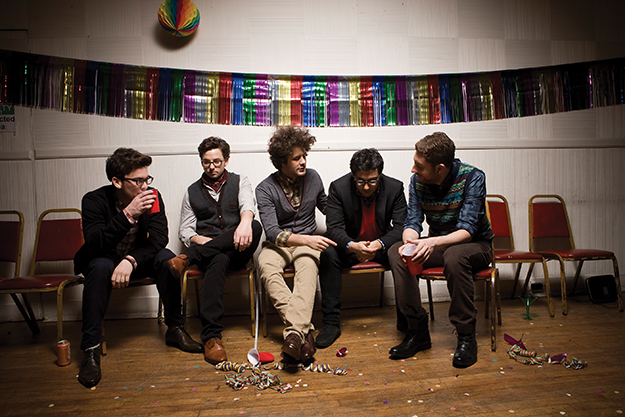 Passion Pit
Nov. 6
Electro-popsters Passion Pit will be performing in support of their latest release, Gossamer, which soldiers on with saturated vocals and stadium-sized rhythms — and a pretty killer single in “Take a Walk” — that offers just the kind of latter-day jams that keep the kids dancing in droves (or something like that).

Uriah Heep
Nov. 5
Yeah, that’s right — Uriah Heep is comin’ to town. And with that comes 40 years of keyboard-bassed Dickensian hard rock in support of the group’s 23rd studio album, Into the Wild.  Like most bands long in the tooth, the Heep has had its share of lineup changes, though main Heep songwriter Mick Box has kept things afloat with constant sell-out tours in Germany, the Netherlands, Scandinavia, Russia and Japan.

OvreArts
Nov. 15
Do you like surprises?  Me neither.  But for those who do, OvreArts, the resident ensemble of Heinz Memorial Chapel, presents “A Great and Mighty Voice,” featuring surprise guest artists from the National Symphony Orchestra, the Pittsburgh Symphony Orchestra, the Metropolitan Opera, the Vienna State Opera and La Scala. In addition, you can register for a pre-concert meal with all the fixins.

Walter Morales
Nov. 16
Walter Morales, an adjunct professor at Chatham University, presents a three-part recital series, offering a sample of the varied piano works of Denmark, Sweden and Norway. Morales created the presentation with the Chatham University Music Program in honor of the 2012 Global Focus Year of Scandinavia. Morales plays the giants of Northern music, as well as modern pieces; this month’s show features classical music of Denmark.

Brian Setzer
Nov. 25
How does Christmas in November sound? A bit odd? Well, not if you’re Brian Setzer! The swing revivalist will be back in Pittsburgh for this holiday event. With appearances from television commercials to the White House, ex-Stray Cat Setzer and company have been bopping out classic standards since the early ’90s, and this year promises to be no different. This special performance will feature holiday tunes from the group’s two albums of Christmas standards.

The Ripe
Into Your Ears
Pittsburgh’s Get Hip Recordings has passionately tended the fires of garage rock for more than 20 years, gallantly providing a bevy of psychedelic and spirited rock for aficionados to get their grubby little mitts on. One of the label’s latest releases, by Austin-based The Ripe, continues in that tradition with a sublime offering of Loaded-era Velvets meets the Beau Brummels that’s sure to please those who yearn for three chords and the truth. The fellas pay their respects to power-pop heavyweights Big Star in Yellow Phone, while singer/guitarist Jake Garcia boasts an uncanny vocal resemblance to Luna-era Dean Wareham (another VU protege) in album closer “Lost Weekend.”  The real highlight, though, is searing rocker “Constant Waves,” which shows the band’s elasticity in songwriting, with instruments fussin’ and a feudin’, leaping to and fro amongst genres and decades, culminating in a bittersweet crescendo of audacity that would provide a solid anchor for any self-respecting mixtape.

Weird Paul
25 Lo-Fi Years
Gather ’round, dear readers, as I give you a brief synopsis of the man named Weird Paul Petroskey: He began writing quirky pop tunes in his bedroom more than 25 years ago — songs that ran the gamut of subject matter from teenage rebellion to sage advice. It didn’t take long to strike a deal with indie label Homestead Records, which brought the seminal Lo-Fidelity, Hi-Anxiety to the masses. Petroskey returned to the scene in the mid-aughts with more records and live shows, eventually leading to a documentary.  But this “best of” comp featuring cautionary tales of public inebriation (“I Got Drunk at Chuck E. Cheese”) and a guest spot by the Titan of Quirk himself, Jad Fair, makes 25 Lo-Fi Years the perfect primer for Weird Paul fans, old and new.