After three years, Morrissey brings his last release, ‘Years of Refusal,’ and displeasure with pop culture and politics back to the ’Burgh. 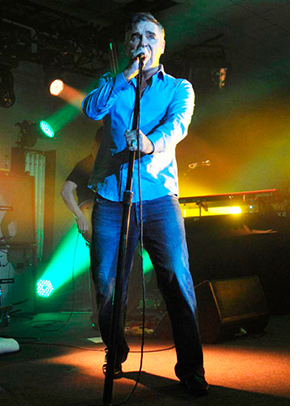 Morrissey
Oct. 23
Years of Refusal was the last release from legendary and perfectly coifed ex-Smiths frontman Morrissey (so it’s been three long years). But that hasn’t kept old Moz from voicing his displeasure with pop culture and politics.  And it hasn’t kept him from the touring circuit, either. This charming (yet often curmudgeonly) man will make an appearance at Heinz Hall later this month. And as to whether he’ll delve into that legendary Smiths discography, what difference does it make?

The Misfits
Oct. 18
The Misfits are still alive and kicking, and looking to celebrate their latest release, The Devil’s Rain.  Founding father (and lead vocalist) Jerry Only promises yet another round of punk-rock creepiness that few bands can match. Get ready for a perfect storm of pre-Halloween madness.

Fiona Apple
Oct. 21
There was a time when Fiona Apple’s album titles actually ran longer than her live performances. This month, Apple will take to Stage AE for her latest release, which, in keeping with the spirit of verbosity, is entitled The Idler Wheel Is Wiser Than the Driver of the Screw and Whipping Cords Will Serve You More Than Ropes Will Ever Do (phew!).

Alfie Boe
Oct. 30
Fans of Les Miserables will be delighted to know that Alfie Boe and his stunning tenor will be in town. Boe, whose very first turn on stage involved the iconic Les Mis tune “Bring Him Home,” will be touring in support of his album entitled — wait for it — Bring Him Home.

Asia
Oct. 31
While the term “supergroup” is clearly a relic of the ’60s, it’s worth pointing out that English arena-rock group Asia technically began in the early ’80s as an off-shoot of prog-rockers from a few bands. Although it’s remarkable for any band that’s had roughly 147 members to celebrate decades of music, it should also be duly noted that the band’s original members have all agreed to reform for the 30th anniversary tour.


Meeting of Important People
My Ears Are Having a Heart Attack
MOIP’s latest album finds the group making substantial use of coyly arranged backing vocals and increased lyrical strength over a pop setting, bridging the gap between the early styling of Zombies and modern day-era Shins (or at least the era when the Shins were making good music). The band finds itself channeling its inner Kinks in “Old Folks,” with singer Josh Verbanets taking a Davies-ian turn that’s sure to pluck those somber strings of nostalgia, just before the furious turn of electric (and eclectic) rhythm ends on a quiet coda of guitar.  As energetic a live band as there is in Pittsburgh, it appears that the People have made lengthy strides within the studio, too, if the increased comfort level within the subtle myths that bloom from knobs and faders is to be believed (and it is). Combine that with authoritative songwriting and solid musicianship and you have a collection of pop tunes to help ease you through the fall nights.

edhochuli (split-single with Amaget)
It’s the Tiger Not the Bunny
With this split-single, the kids in locally based edhochuli mete out a post-hardcore summary that reads like an audio version of someone coming unwound while playing a game of Husker Du in quicksand. Tumultuous rhythms and sing-song-shouted vocals batter through a sheen of placid guitars that tangle and traverse what would appear to be a dystopian landscape of sorts, exacting the type of angst-y vibe that we’ve all come to know and love with the genre. The interplay between instruments and vocals keeps the peace without sounding like the kind of dudes who spend way too much time practicing their scales and paradiddles. This is good stuff  — prime sustenance for the inner rager. It’s the Tiger Not the Bunny is edhochuli doling it out harsh with a welcoming hand.