Plus more June concerts from The Cult, Cinderella and Melissa Etheridge. 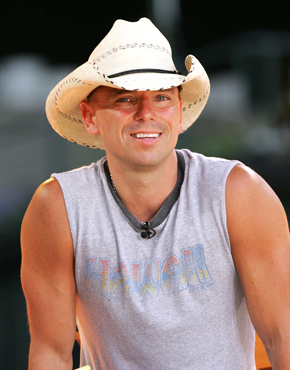 Kenny Chesney and Tim McGraw
June 30
Well, hot dang! Kenny Chesney is touring in support of his 13th studio album, Welcome to the Fishbowl, which includes a first-single duet with Tim McGraw, “Feel Like a Rock Star.” During their Brothers of the Sun tour, the duo will be hopping from state to state, bringing with them their hearty tunes and a doggone good time.

The Cult
June 3
Whether he was too busy orchestrating yet another ubiquitous reissue or compilation of his band‚ back catalog, The Cult lead singer Ian Astbury said there would be no more album releases after 2009’s Capsule EP. But every hard-rock enthusiast knew it was only a matter of time until the Cult — that would be Astbury, guitarist Billy Duffy and whoever happens to be filling out the rest of the band — were back together to release Choice of Weapon, the group’s ninth studio album. While the British hard-rockers first made their mark as early ‘80s post-punkers, those roots quickly gave way to a more commercially viable hard-rock sound, leading to such hits as the admittedly awesome “Fire Woman” from 1989’s Sonic Temple.

Melissa Etheridge
June 9
A powerhouse musician, composer and activist Etheridge will perform as the headliner for Pride in the Street. The two-time Grammy Award-winner responsible for hit singles “Come to My Window” and “I’m the Only One” will rock out for this occasion, the main event of Pittsburgh Pride 2012. Pride offers activities that create awareness for gay, lesbian, bisexual and transgender individuals.

Cinderella
June 23
The musical landscape has changed drastically since Philadelphia-based ‘80s rockers Cinderella ruled the radio waves, riding high on the band’s strong debut record Night Songs and continuing with the multiplatinum success of their second release, Long Cold Winter. The ‘90s and aughts weren’t as kind, personally or commercially, but after overcoming various tribulations (most notably, vocalist Tom Keifer’s struggles with vocal issues), the band is back on the road, which this humble scribe is digging because they always had a certain artistic credibility that few other heavy metal “glam” bands from that era seemed to possess. You’ll be nobody’s fool, should a decision be made to partake in the festivities at Carnegie Music Hall.

Gangwish
We Move
While the Gangwish that I caught some time ago at a Polish Hill bar was pleasantly shocking to my ears with its thundering dissonance and outright opposal to typical song structure, it’s nice to know that this one-man show by Pittsburgh percussionist Sam Pace was merely the first step in the project’s continued development.  Pace’s latest reprisal against the world of song-writing banality has certainly taken a more melodic approach, but not at the expense of those interesting textures or ambitious ideas from before. If anything, We Move serves as a springboard for the next step in the band’s continued progress, dipping its toes into several genres (dub, ambient, experimental) that call to mind everything from Can to Brian Eno. Pace enlisted Lindsey Williams along with Caulen Kress and Matt McDermott to round out the sound with vocals, bass, samples and synths, respectively; their contributions make for a thoroughly cohesive and enjoyable full-length release.

Kevin Finn
2012
Not afraid to throw the listener for a curve, Kevin Finn’s latest release, 2012, is a lesson in intricate guitar work and nicely syncopated percussive elements. The spare and sparse vocals allow for the instrumental compositions to breathe and find their own place within the album, lending to these ears a more than sufficient reminder of Southern Records’ outstanding music catalog (of which Finn would fit in perfectly). Kevin’s strength has always been his vocal delivery and keen sense of lyricism, and 2012 is no stranger to either of these tendencies. So, you’re probably wondering: Where’s the curve? Well, despite these ruminations, the guy still manages to toss in a few numbers straight from the garage, songs that seem to howl against the politics of love and spite. With that said, all of the longing and regret built up in the acoustic songs is left to contemplate itself within the cold, dark attic of the heart that solidifies the architecture of this record — and really, what better place for the lonely to find such common ground?